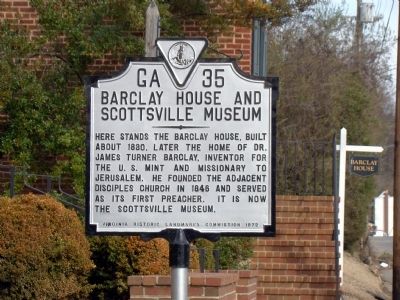 Here stands the Barclay House, built about 1830, later the home of Dr. James Turner Barclay, inventor for the U. S. Mint and missionary to Jerusalem. He founded the adjacent Diciples Church in 1846 and served as its first preacher. It is now the Scottsville Museum.

Topics and series. This historical marker is listed in these topic lists: Churches & Religion • Industry & Commerce • Settlements & Settlers. In addition, it is included in the Virginia Department of Historic Resources series list. A significant historical year for this entry is 1830. 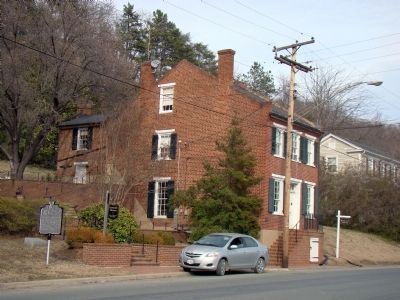 Click or scan to see
this page online
. Touch for map. Marker is in this post office area: Scottsville VA 24590, United States of America. Touch for directions.

Also see . . .
1. Barclay House and Scottsville Museum. “The Barclay House is a small townhouse on Scottsville's Lot 31 and is next door to the Disciples of Christ Church (now Scottsville Museum) on Main Street. John B. Hart purchased this property without a structure in 1830 and resold the lot six months later for his original purchase price. On January 1, 1838, Daniel P. Perkins sold Lot 31 with its ‘house and lot on Main Street’ to Sarah C. Harris, mother 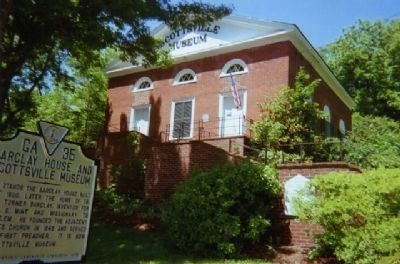 Photographed By Amy Martin Wilson, May 20, 2009
3. Scottsville Museum and Marker
of James Turner Barclay. By 1850, Dr. James Turner Barclay and his family lived in this house next door to the Disciples of Christ Church where he was its first minister.” (Submitted on April 16, 2009.)

2. Disciples of Christ Church. “After three years in Jerusalem, Dr. Barclay returned to America and wrote a book, The City of the Great King. In 1854, President Pierce appointed him to the Philadelphia Mint to determine ways to stop counterfeiting as well as coin deterioration. In 1857, the Barclay family went back to their Jerusalem mission for eight more years. When they returned to the United States in 1865, Dr. Barclay became Professor of Chemistry at Bethany College until his retirement.” (Submitted on April 16, 2009.)

3. Our Museum’s Mission. “Scottsville Museum brings our town’s history to life, from its beginnings as an 18th century James River settlement to its shining era as a bustling 19th century river and canal port. Additionally the Museum depicts Scottsville as a center of Civil War activity through its re-emergence as a thriving community in the 20th century. Housed inside the former 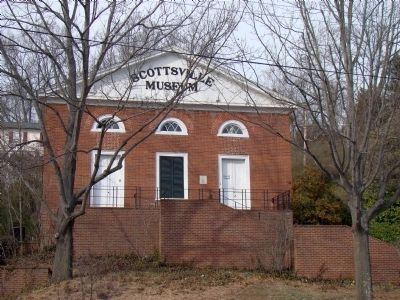 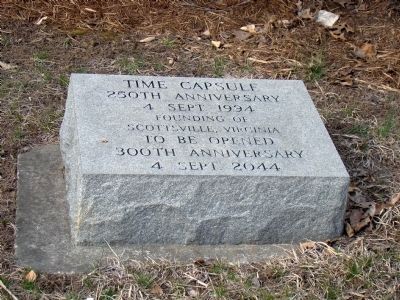