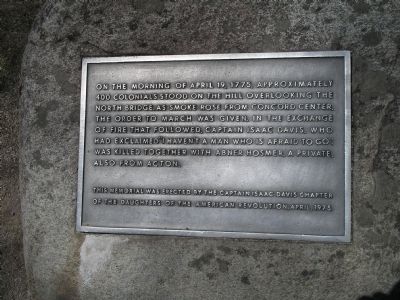 On the morning of April 19, 1775, approximately 400 colonials stood on the hill overlooking the North Bridge. As smoke rose from Concord center, the order to march was given. In the exchange of fire that followed, Captain Isaac Davis, who had exclaimed “I haven’t a man who is afraid to go,” was killed together with Abner Hosmer, a private, also from Acton.

This memorial was erected by the Captain Isaac Davis Chapter of the Daughters of the American Revolution, April, 1975.

Topics and series. This historical marker is listed in these topic lists: Notable Events • War, US Revolutionary. In addition, it is included in the Daughters of the American Revolution (DAR) series list. A significant historical date for this entry is April 19, 1775.

Location. 42° 28.12′ N, 71° 21.116′ W. Marker is in Concord, Massachusetts, in Middlesex County. Marker is on Monument Street, on the left when traveling north. Marker is located in the Minute Man National Historic Park, near the 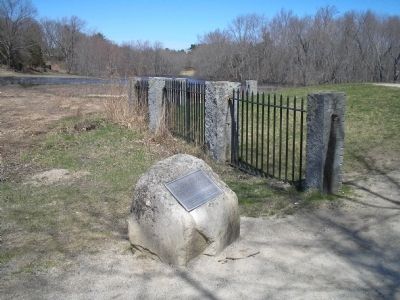 Click or scan to see
this page online
North Bridge. Touch for map. Marker is in this post office area: Concord MA 01742, United States of America. Touch for directions.

2. The Battle of Concord. The American Revolutionary War website. (Submitted on May 7, 2009, by Bill Coughlin of Woodland Park, New Jersey.) 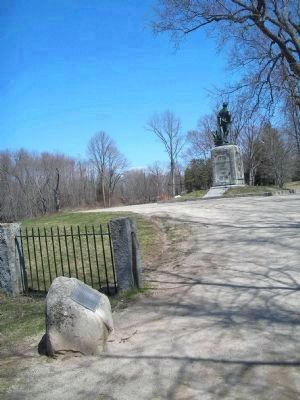