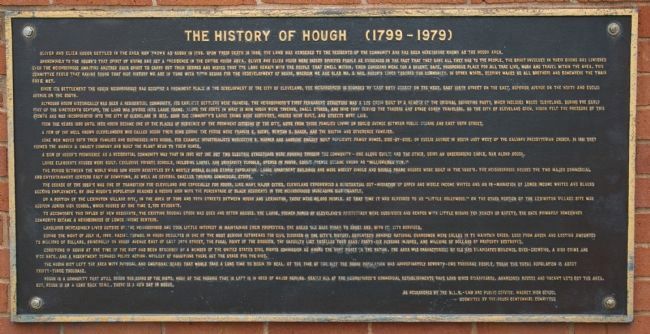 Oliver and Eliza Hough settled in the area now known as Hough in 1799. Upon their death in 1866, the land was rendered to the residents of the community has has been heretofore known as the Hough area.

Unknowingly to the Hough's that spirit of giving has set a precedence in the entire Hough area. Oliver and Eliza Hough were indeed spirited people as evidenced in the fact that they gave all they had to the people. The spirit involved in their giving has lingered over the neighborhood awaiting another such spirit to carry out their desired and wishes that the land remain with the people that dwell within. Their concerns were for a decent, safe, prosperous place for all that live, work and travel within the area. This committee feels that having found that rich history we are in tune with their desire for the redevelopment of Hough, wherein we are glad Mr. & Mrs. Hough's lives touched our community. In other words, destiny makes us all brothers and somewhere the twain have met.

Since its settlement the Hough neighborhood has occupied a prominent place in the development of the city of Cleveland. The neighborhood is bounded by 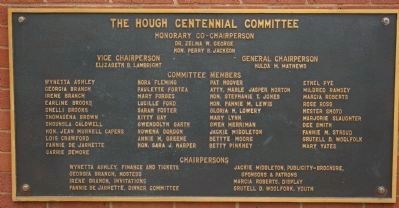 Although Hough historically has been a residential community, its earliest settlers were farmers. The neighborhood's first permanent structure was a log cabin built by a member of the original surveying party, which included Moses Cleveland. During the early part of the nineteenth century, the land was divided into large farms. Along the route in what is now Hough were taverns, small stores, and inns that served the traders and stage coach travelers. As the city of Cleveland grew, Hough felt the pressure of this growth and was into the city of Cleveland in 1873. Soon the community's large farms were subdivided, houses were built, and streets were laid.

From the years 1880 until 1920 Hough became one of the places of residence of the prominent citizens of the city, aside from those families living on Euclid Avenue between Public Square and East 55th Street.

A few of the well known Clevelanders who called Hough their home during the period were Frances E. Duery, Newton D. Baker, and the Bolton and Severance families.

Some of the men moved both their families and businesses into Hough. For example, industrialists Worcester R. Warner and Ambrose Swasey built duplicate family homes, side-by-side, on Euclid Avenue in Hough just 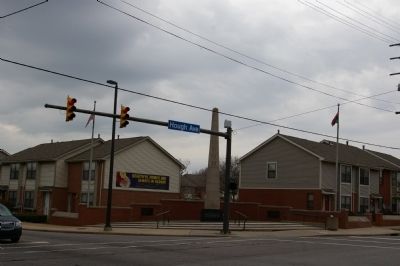 Photographed By Christopher Busta-Peck, April 14, 2009
3. The History of Hough (1799-1979) Marker
west of the Calvary Presbyterian Church. In 1881 they formed the Warner & Swasey Company and built the plant near to their homes.

A sign of Hough's prominence as a residential community was that in 1890 not one but two electric streetcars were running through the community - one along Euclid and the other, using an underground cable, ran along Hough.

The period between the World Wars saw Hough resettled by a mostly middle class ethnic population. Large apartment buildings and more modest single and double frame houses were built in the 1920's. The neighborhood housed the two major commercial and entertainment centers east of downtown, as well as several smaller thriving commercial strips.

The decade of the 1950's was one of transition for Cleveland and especially for Hough. Like many major cities, Cleveland experiences a substantial out-migration of upper and middle income whites and an in-migration of lower income whites and blacks seeking employment. By 1960 Hough's population reached a record high with the percentage of black residents in the neighborhood increasing significantly.

To accommodate this influx of new residents, the existing housing stock was used and often abused. The large, former homes of Cleveland's aristocracy were subdivided and rented with little regard for health or safety. The once primarily homeowner community became a neighborhood of lower income renters.

Landlords increasingly lived outside of the neighborhood and took little interest in maintaining their properties. The areas tax base began to erode and, with it, city services.

During the night of July 18, 1966, racial turmoil in Hough resulted in one of the most serious outbreaks for civil disorder in the city's history. Seventeen hundred National Guardsmen were called in to maintain order. Loss from arson and looting amounted to millions of dollars, principally on Hough Avenue east of East 79th Street, the focal point of the disorder. The casualty list totalled four dead, forty-six persons injured, and millions of dollars of property destroyed.

Conditions in Hough at the time of the riot had been described by a member of the United States Civil Rights Commission as among the very worst in the nation. The area was characterized by old and dilapidated buildings, over-crowding, a high crime and vice rate, and a resentment towards police action. Neglect of conditions there set the state for the riot.

The Hough Riot left the area with physical and emotional scars that would take a long time to begin to heal. At the time of the riot the Hough population was approximately seventy-two thousand people. Today, the total population is about thirty-three thousand.

Hough is a community that still bears the scars of the riots. Much of the housing that is left is in need of major repairs. Nearly all of the neighborhood's commercial establishments have long since disappeared. Abandoned houses and vacant lots dot the area. But, Hough is on a come back trail. There is a new day in Hough.

As researched by the M.L.K. Law and Public Service Magnet High School
Submitted by the Hough Centennial Committee

Topics. This historical marker is listed in this topic list: Notable Places. A significant historical date for this entry is July 18, 1966.