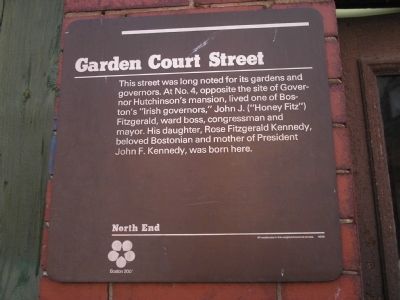 This street was long noted for its gardens and governors. At No. 4, opposite the site of Governor Hutchinson’s mansion, lived one of Boston’s “Irish governors,” John J. (“Honey Fitz”) Fitzgerald, ward boss, congressman and mayor. His daughter, Rose Fitzgerald Kennedy, beloved Bostonian and mother of President John F. Kennedy, was born here.

Topics and series. This historical marker is listed in this topic list: Notable Places. In addition, it is included in the Former U.S. Presidents: #35 John F. Kennedy series list.

Location. 42° 21.852′ N, 71° 3.206′ W. Marker is in Boston, Massachusetts, in Suffolk County. Marker is at the intersection of Garden Court and Prince Street, on the right when traveling north on Garden Court. Touch for map. Marker is in this post office area: Boston MA 02113, United States of America. Touch for directions. 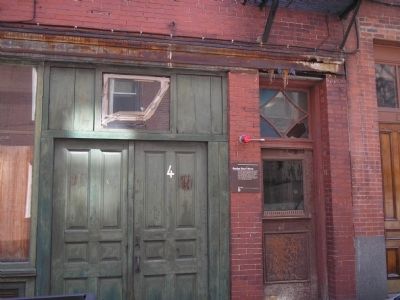