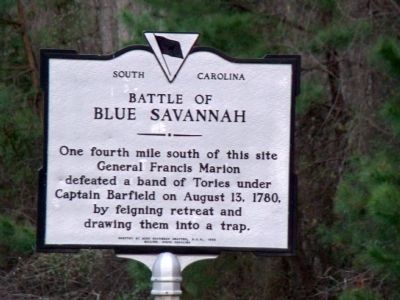 Photographed By J. J. Prats, February 26, 2009
1. Battle of Blue Savannah Marker
Inscription.
Battle of Blue Savannah. . , One fourth mile south of this site General Francis Marion defeated a band of Tories under Captain Barfield on August 13, 1780, by feigning retreat and drawing them into a trap. . This historical marker was erected in 1955 by Blue Savannah Chapter, Daughters of the American Revolution, Mullins, South Carolina. It is Near Rains in Marion County South Carolina

One fourth mile south of this site General Francis Marion defeated a band of Tories under Captain Barfield on August 13, 1780, by feigning retreat and drawing them into a trap.

Topics and series. This historical marker is listed in this topic list: War, US Revolutionary. In addition, it is included in the Daughters of the American Revolution (DAR) series list. A significant historical year for this entry is 1780.

Location. This marker has been replaced by another marker nearby. It was located near 34° 4.394′ N, 79° 17.65′ W. Marker was near Rains, South Carolina, in Marion County. Marker was at the intersection of U.S. 501 and South Carolina Highway 41, on the right when traveling east on U.S. 501. It was east of Marion on the eastbound lanes at the first crossover east of Highway 41. Touch for map. Marker was in this post office area: Mullins SC 29574, United States of America. Touch for directions.

Other nearby markers. At least 8 other markers are within 10 miles of this location, measured as the crow flies 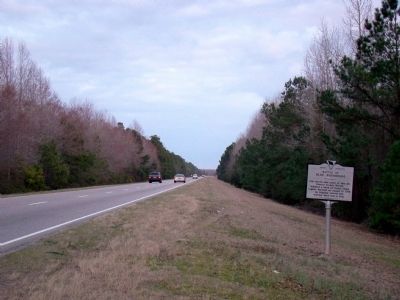 More about this marker. We have a report that this marker was damaged in an auto accident and has been replaced with a marker with the same title but different text. The replacement marker is nearby on SR 41 south of US 501, on the left as you travel south.

Regarding Battle of Blue Savannah. This battle is also known as the Battle of Port’s Ferry.

Also see . . .
1. The Battle of Blue Savannah. American Revolutionary War Website entry:
“Capt. Jesse Barfield with 200 loyalists (and possibly included in this number a small detachment of the 63rd Regiment) attempted to attack Marion, but was himself ambushed in the attempt near Blue Savannah on Britton’s Neck where Marion had retreated after his attack on [Tory Major Micajah] Ganey. Barfield’s men fled into Little Pee Dee Swamp. ... Marion’s success broke the spirit of the local Tories east of the Peedee River. Marion’s victory also encouraged 60 more local volunteers to join his outfit, thus doubling his total number of men.” (Submitted on April 19, 2009.)

2. On this day in history, September 4, 1780: The Swamp Fox wins the Battle of Blue Savannah. Revolutionary 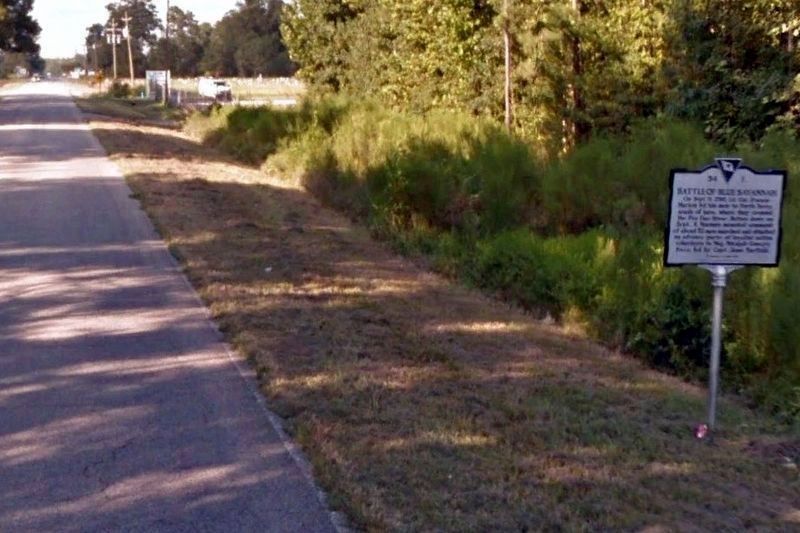 via Google earth, 2019
3. Battle of Blue Savannah - replacement marker with new text at new location
As reported in Additional Commentary. View is on SC41 N, coming up to Collins Feed and Grain .
War and Beyond Website entry (Submitted on March 26, 2021, by Larry Gertner of New York, New York.)

Additional commentary.
1. Marker is missing
I travel this road and this marker is missing. Any information about where it went?
— Submitted February 5, 2018, by Phillip T. Moore of Galivants Ferry, South Carolina.
2. Marker Location
The marker is no longer located along Highway 501. The original marker was damaged by an auto accident, and was replaced. The replaced marker is now nearby, but on SC 41 between Collins Feed & Garden and St. James AME Church.
You can see it on Google Maps streetview, just south of and on the same side as Collins Feed & Garden. It has additional text. Thank you for your report. I have added it to our Want List. —Ed.
— Submitted April 1, 2020, by Frank Barnhill of Aynor, South Carolina.
Credits. This page was last revised on March 26, 2021. It was originally submitted on April 19, 2009, by J. J. Prats of Powell, Ohio. This page has been viewed 4,221 times since then and 97 times this year. Photos:   1, 2. submitted on April 19, 2009, by J. J. Prats of Powell, Ohio.   3. submitted on March 26, 2021, by Larry Gertner of New York, New York.
Share this page.