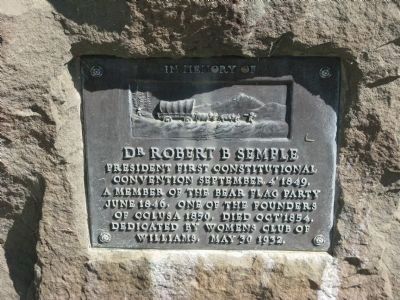 Photographed By Syd Whittle, April 20, 2009
1. Dr. Robert Semple Marker
Inscription.
Dr. Robert Semple. In Memory of.
President First Constitutional Convention September 4, 1849. A member of the Bear Flag Party June, 1846. One of the founders of Colusa 1850. Died Oct. 1854.. . This historical marker was erected in 1932 by The Womens Club of Williams. It is in Williams in Colusa County California

Erected 1932 by The Womens Club of Williams.

Topics. This historical marker is listed in these topic lists: Cemeteries & Burial Sites • Government & Politics • Settlements & Settlers. A significant historical month for this entry is June 1846.

Location. 39° 8.521′ N, 122° 9.076′ W. Marker is in Williams, California, in Colusa County. Marker can be reached from the intersection of Zumwalt Road, and Crawford Road, on the right when traveling west. Marker is located at the Williams Cemetery. Touch for map. Marker is at or near this postal address: 2438 Zumwalt Road, Williams CA 95987, United States of America. Touch for directions. 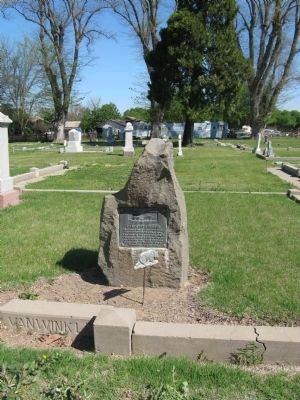 Photographed By Syd Whittle, April 20, 2009
2. Dr. Robert Semple Marker
The small bear in the front has the inscription "NSGW", [Native Sons of the Golden West].

Additional commentary.
1. Obituary Published in the Sacramento Union Nov. 4, 1854
**DEATH of a CALIFORNIA PIONEER -- On the morning of the 25th instant, Dr. Robert SEMPLE died at his home, 14 miles south of Colusa. His death was occasioned by injuries received by a fall from a horse. Dr. SEMPLE was in the 48th year of his age when he died. He was born in Kentucky and came across the plains to California in 1846. Towards the end of the same year, in conjunction with the late Walter Colton, he established the 'Californian' at Monterey, which was the first newspaper published in the State. In the same year he 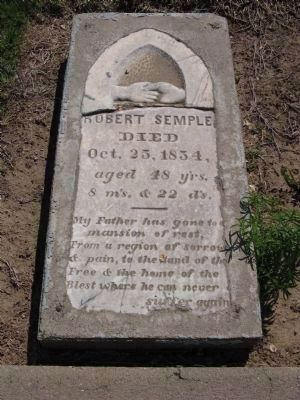 Photographed By Syd Whittle, April 20, 2009
3. Robert Semple Grave Marker
Robert Semple
DIED
Oct. 25, 1854,
aged 48 yrs.
8 m's. & 22 d's.
---------
My Father has gone to a
mansion of rest,
From a region of sorrow
& pain, to the Land of the
Free & the home of the
Blest where he can never
suffer again.
took a leading part in what was called the Bear Flag revolution. He afterwards, in conjunction with Mr. Thomas O. Larkin, founded the city of Benicia, on ground belonging to Gen. Vallejo. Mr. Larkin afterwards disposed of his interest in Benicia, with which place Dr. Semple continued to be more or less connected till his death.
In 1849, Dr. SEMPLE was elected a delegate to the Convention for the formation of a State Constitution, in August of that year. The Convention chose him their President almost unanimously. Though of late it had been little heard of the name of Dr. Semple was familiar to the ears of our citizens for several years after '46. His connection with some of the chief events in the early history of California entitle Dr. Semple to a prominent place in its annals. He was of a confiding nature and possessed of a genial disposition, social habits and urbanity of manner; he was an agreeable companion, a dis-interested friend, a tender father and an affectionate husband. After a life full of interesting incidents and abounding in fruitful merits, not unmixed with the vicissitudes of fate, he reposes where the wild flowers blossom and the mountain winds sigh his requiem."
— Submitted April 20, 2009. 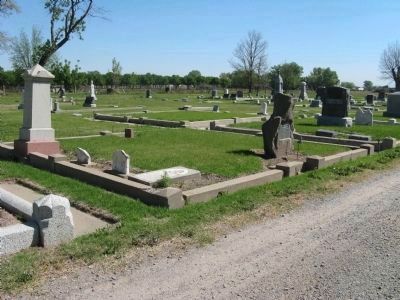 Photographed By Syd Whittle, April 20, 2009
4. Dr. Robert Semple Burial Plot.
Marker is to the right and grave marker is the granite horizontal slab at the center of photo. 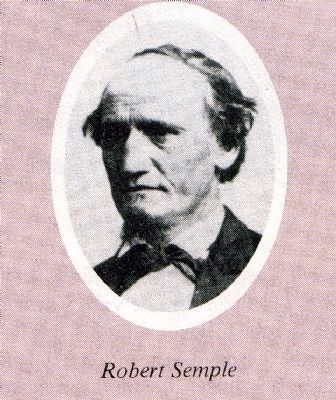