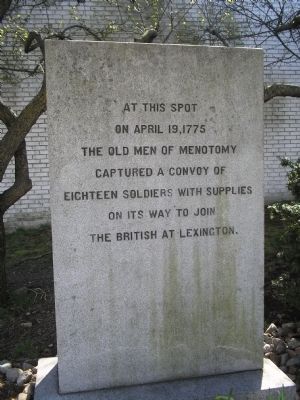 At this spot
on April 19, 1775
the Old Men of Menotomy
captured a convoy of
eighteen soldiers with supplies
on its way to join
the British at Lexington.

Topics. This historical marker is listed in this topic list: War, US Revolutionary. A significant historical month for this entry is April 1857. 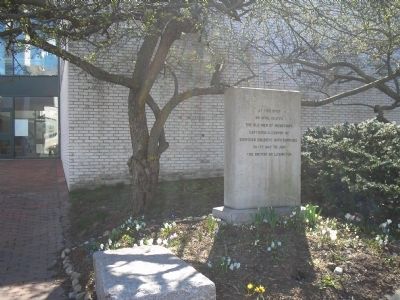 Click or scan to see
this page online
(approx. 1.3 miles away); The Foot of the Rocks (approx. 1.4 miles away). Touch for a list and map of all markers in Arlington.

Also see . . .  Menotomy Minuteman Historical Trail, A Walking Tour of Arlington’s Past. From page 11: "A group – numbering twelve - later known as “the old men of Menotomy” who were up in years and unfit for military duty, met at Cooper’s Tavern to form a plan for capturing the wagons. They chose David Lamson, a courageous man supposedly of African and Indian descent to lead them in their attack on the convoy. The band hid behind a stonewall to wait for the convoy’s arrival. As it passed, Lamson and his men jumped up, leveled their muskets and ordered the British troops (one officer; thirteen soldiers) to surrender." (Submitted on August 4, 2009.)
Credits. This page was last revised on June 21, 2017. It was originally submitted on April 20, 2009, by Bill Coughlin of Woodland Park, New Jersey. This page has been viewed 2,207 times since then and 89 times this year. Photos:   1, 2. submitted on April 20, 2009, by Bill Coughlin of Woodland Park, New Jersey.
Share this page.