Fight for the Weldon Railroad 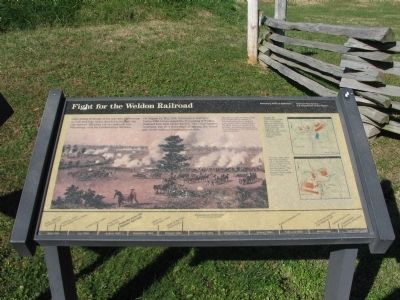 Photographed By Craig Swain, November 22, 2008
1. Fight for the Weldon Railroad Marker
Inscription.
Fight for the Weldon Railroad. . After failing to bludgeon his way into Petersburg in June and July, Grant decided to strangle the city instead. His plan: cut the railroads into Petersburg - cut the Confederate's lifelines. , On August 18, Maj. Gen. Gouverneur Warren's Union Fifth Corps seized the Petersburg and Weldon Railroad here near Globe Tavern. The Confederates retaliated, but after three days of fighting, the Union grip on the railroad remained unshaken. . This historical marker was erected by National Park Service, U.S. Department of the Interior. It is in Petersburg Virginia

After failing to bludgeon his way into Petersburg in June and July, Grant decided to strangle the city instead. His plan: cut the railroads into Petersburg - cut the Confederate's lifelines.

Topics. This historical marker is listed in this topic list: War, US Civil. A significant day of the year for for this entry is August 18.

Other nearby markers. At least 8 other markers are within 2 miles of this marker, measured as the crow flies. Siege of Petersburg—Grant's Fourth Offensive (here, next to this marker); 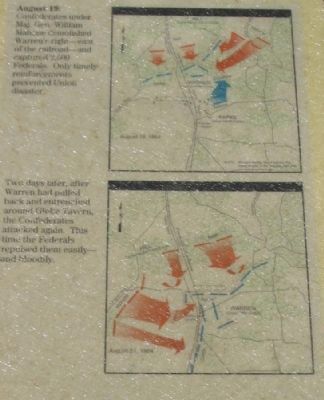 Photographed By Craig Swain, November 22, 2008
2. Close up of the Battle Maps

More about this marker. In the main section of the marker is a painting of the action around Globe Tavern. The Federals (facing north) fought from earthworks on August 21. The works shown here stood just a few yards south of (behind) you. The Buck House, on the left of the painting, was dismantled during the construction of Fort Wadsworth a few weeks later.

Beside two maps is a description of the fighting which took place around Globe Tavern. August 19: Confederates under Maj. Gen. William Mahone demolished Warren's right - east of the railroad - and captured 2,500 Federals. Only timely reinforcements prevented Union disaster.

Two days later, after Warren had pulled back and entrenched around Globe Tavern, the Confederates attacked again. This time the Federals repulsed them easily - and bloodily.

At the bottom of the marker is a time line of the Petersburg siege.

Related marker. Click here for another marker that is related to this marker. Oliva Cayer, Congressional Medal of Honor 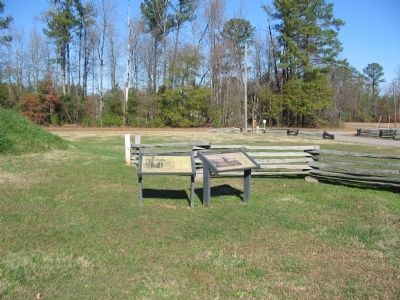 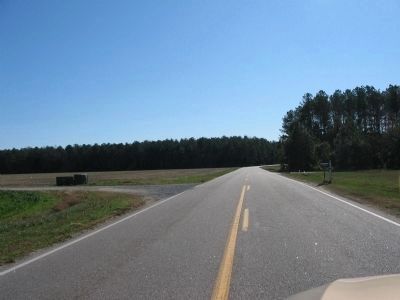 Photographed By Craig Swain, November 22, 2008
4. Globe Tavern Location
Looking south down Halifax Road, about a half mile south of Fort Wadsworth. The tavern was torn down after the war. It stood along the Weldon Railroad at the time, which originally ran parallel to Halifax Road (the railroad has since shifted further to the east). During the August 21 fighting, Griffin's Division of Warren's Corps occupied earthworks on the west (right) side of the road through this sector.
Credits. This page was last revised on September 23, 2021. It was originally submitted on December 24, 2008, by Craig Swain of Leesburg, Virginia. This page has been viewed 2,485 times since then and 32 times this year. Last updated on September 10, 2021, by Bradley Owen of Morgantown, West Virginia. Photos:   1, 2, 3, 4. submitted on December 24, 2008, by Craig Swain of Leesburg, Virginia. • J. Makali Bruton was the editor who published this page.
Share this page.