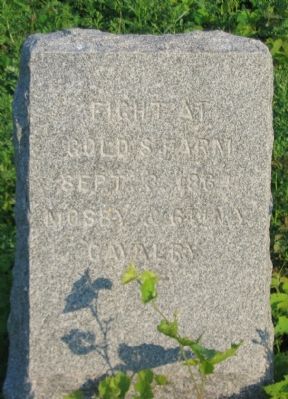 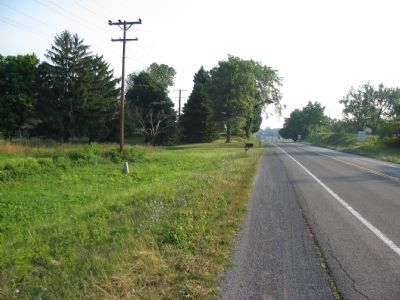 By Craig Swain, July 15, 2007
2. Fight at Gold's Farm Marker
1. Fight at Gold’s Farm
The action here is best described as an ambush. On the same day the Battle of Berryville opened, Union General Alfred Torbert was patrolling south of the town. A detachment of Mosby’s command under Captain Sam Chapman attacked the Federal lead elements, the 6th N.Y. Cavalry, and scattered them. As the main Federal force approached, Chapman withdrew with 40 horses and 30 prisoners.
— Submitted July 22, 2007, by Craig Swain of Leesburg, Virginia.
Credits. This page was last revised on June 16, 2016. It was originally submitted on July 22, 2007, by Craig Swain of Leesburg, Virginia. This page has been viewed 2,230 times since then and 25 times this year. Photos:   1, 2. submitted on July 22, 2007, by Craig Swain of Leesburg, Virginia. • J. J. Prats was the editor who published this page.
Share This Page.