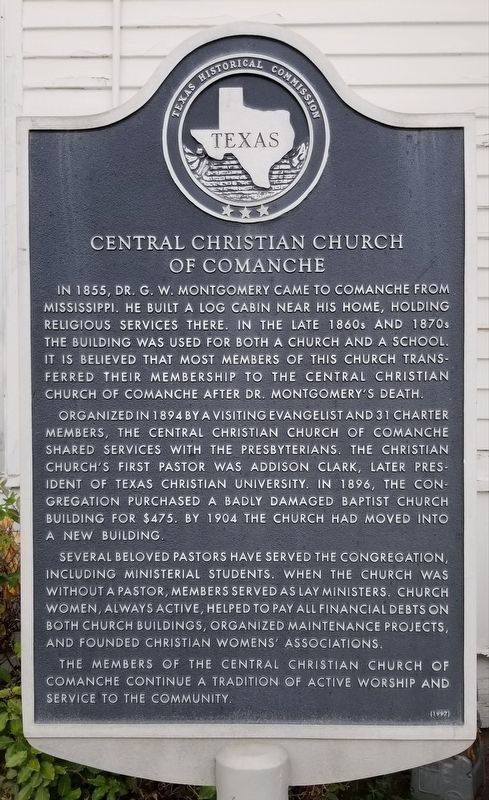 In 1855, Dr. G.W. Montgomery came to Comanche from Mississippi. He built a log cabin near his home, holding religious services there. In the late 1860s and 1870s the building was used for both a church and a school. It is believed that most members of this church transferred their membership to the Central Christian Church of Comanche after Dr. Montgomery's death.

Organized in 1894 by a visiting evangelist and 31 charter members, the Central Christian Church of Comanche shared services with the Presbyterians. The Christian Church's first pastor was Addison Clark, later president of Texas Christian University. In 1896, the congregation purchased a badly damaged Baptist church building for $475. By 1904 the church had moved into a new building.

Several beloved pastors have served the congregation, including ministerial students. When the church was without a pastor, members served as lay ministers. Church women, always active, helped to pay all financial debts on both church buildings, organized maintenance projects, and founded Christian Womens' Associations.

The members of the Central Christian Church

Photographed By James Hulse, September 8, 2021
2. The front of the Central Christian Church of Comanche and Marker

Click or scan to see
this page online
of Comanche continue a tradition of active worship and service to the community.

Topics. This historical marker is listed in these topic lists: Churches & Religion • Education • Women. A significant historical year for this entry is 1855.