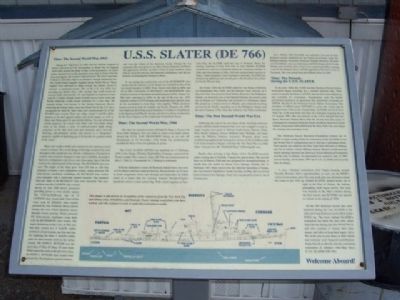 During the “dark days” of 1940, after the German conquest of France and prior to the U.S. involvement in World War II, England stood alone against the threat of Nazi world domination. An island nation, England was totally dependent upon ships to bring here the food and supplies she needed to defend herself. The Nazis used their U-Boats to sink those ships in an attempt to strangle England by sea. The United States supplied England during World War II. Those supplies were delivered by ships crossing the Atlantic Ocean in convoys or protected groups. Part of the U.S. war effort was providing the British Navy with warships that could escort the convoys safely between the U.S. and England. In response to their need for a smaller, cheaper, faster-to-build escort vessel, the British Admiralty sought design proposals for a new ship. The ensuing design was known as the British Destroyer Escort. Following the United States’ entry into World War II, the U.S. Navy recognized the need for these ships and commissioned 44 of the EVARTS-class vessels. These new ships carried 3-inch/50 caliber cannons 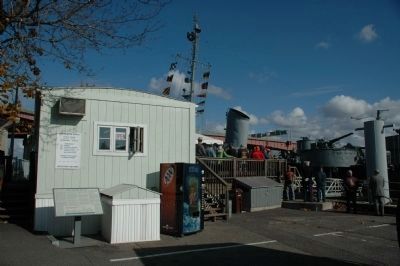 Click or scan to see
this page online
to be used against surface and aerial targets, as well as 40mm and 20mm guns for anti-aircraft defense. For anti-submarine warfare purposes, the vessels were fitted with twin depth charge racks on the fantail, a series of outward-aimed depth charge projectors on the after deck, port and starboard, and a forward-throwing anti-submarine mortar known as a “hedgehog” projector, capable of deploying up to 24 missiles in a pattern ahead of the vessel.

Plans were made to build and commission new destroyer escort vessels in volume. The overall design of the ships remained the same throughout the production run, but the configuration of propulsion systems and armament changed as need and availability demanded. Each new configuration was given a new class name; that of the first vessel to be commissioned of that design. The BUCKLEY-class was next. The length of the ships grew from 289 feet to 306 feet, primarily to house a new propulsion system: steam-powered G[eneral] E[lectric] turbo-electric machinery. Amidships, the BUCKLEY-class vessels were equipped with a triple-tube torpedo launcher. One hundred fifty-four ships of the BUCKLEY-class were launched. The next variation was the GANNON-class vessels, driven by four G[eneral] M[otors] diesel generators providing power to twin electric motors. The USS SLATER is one of 72 GANNON-class vessels built. Next off the ways were 85 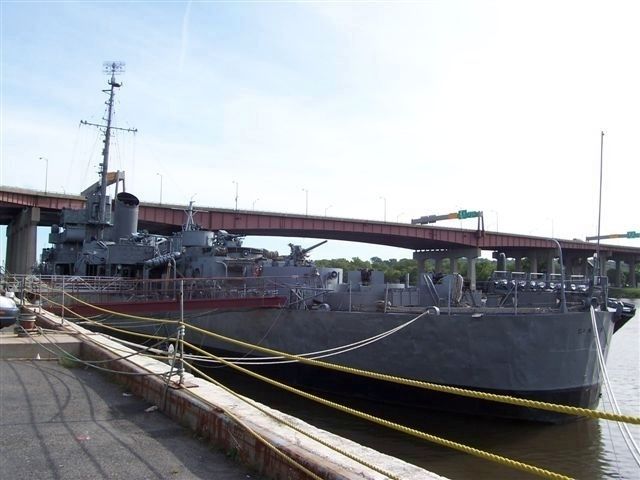 By Richard E. Miller, August 31, 2005
3. The museum ship, U.S.S. SLATER
- on the Hudson River with the Dunn Memorial Bridge in background.
EDSALL-class vessels powered by four Fairbanks-Morse diesels turning the twin 6-foot diameter screws through reverse gearing. Steam powered GE turbo-electric machinery came back with the RUDDEROW-class vessels. The major distinction in this class of “DEs” was that they carried two 5 inch/50 caliber cannons in closed mounts, one fore and one aft, replacing the three 3 inch/50 caliber guns on open mounts used on the earlier vessels. The JOHN C. BUTLER was the next class of DEs. Of these, 85 were built. While much the same as the previous class, the JOHN C. BUTLER-class vessels were powered by Westinghouse geared turbines and were the fastest of the destroyer escorts. During the war, numerous DEs were given to our allies: France, England, and Brazil. The appearance of these vessels in large numbers along with air coverage for convoys and electronic intelligence were the key elements in defeating the German U-Boats.

It was during the construction run of the RUDDEROW-class vessels that the destroyer escort design was modified to that of the fast attack transport, or “APD.” Forty vessels were built as APDs and 22 as DEs. Conversion of BUCKLEY and RUDDEROW-class destroyer escorts to fast attack transports began in 1944. Ninety-five DEs were converted to APDs by the end of the war. An APD typically carried four “LCVP” landing craft amidships and a derrick crane on the quarterdeck 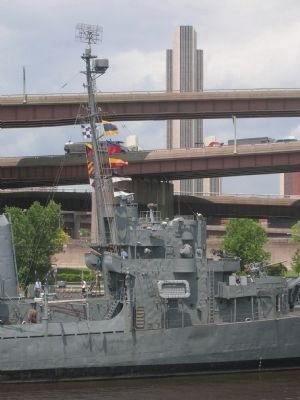 By Howard C. Ohlhous, June 20, 2008
4. U.S.S. Slater in Albany, NY
The USS Slater with Albany's Corning Tower in the background.
to load them with supplies. While destroyer escorts served in both the Atlantic and Pacific Theatres, the APDs were deployed delivering armed battalions of soldiers to beachheads in the Japanese-held Pacific Islands and served as bases of operations for the Navy frogmen of the Underwater Demolition Teams.

This ship was named in honor of Frank O. Slater, a 22 year-old from Fyffe, Alabama, who was killed in action at his battle station aboard the U.S.S. SAN FRANCISCO during an air raid off Guadalcanal on 12 November, 1942. Frank was posthumously awarded the Navy Cross for gallantry in action.

With the shakedown cruise off Bermuda behind them, her crew of 216 officers and men sailed for Boston, Massachusetts on 25 June to await assignment. From July through mid-September, SLATER acted as a target ship for training Torpedo Bomber/Fighter squadrons, and as a sonar school ship. With a brief stopover in New York City, the SLATER made her way to Portland, Maine for training, returning to New York City in early October. SLATER escorted two convoys to England during the remaining 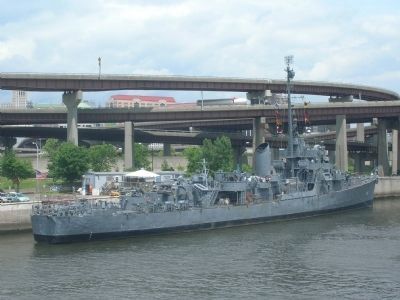 By Howard C. Ohlhous, June 20, 2008
5. U.S.S. Slater - Destoyer Escort
months of 1944; and from January to May 1945, she escorted three convoys to Wales, United Kingdom. Upon Germany’s surrender, SLATER was refitted with additional anti-aircraft guns at the Brooklyn Navy Yard for Pacific Theatre duty.

On 8 June 1945, the SLATER sailed for San Diego, California via Guantanamo Bay, Cuba and the Panama Canal, arriving on 6 July. On 9 July, she set out for Pearl Harbor. Routed to the Philippines Islands via Eniwetok, one of the Marshall Islands, she joined a task unit at Manila on 5 September and escorted it to Yokohama, Japan. She picked up a return convoy to Manila, and continued escorting convoys in the Pacific, operating out of the Philippine Islands until the end of January 1946, when she sailed for San Pedro, California.

Following the end of the war many of the surviving destroyer escorts and fast attack transports that were not scrapped or sunk as target vessels were given to Taiwan, South Korea, Mexico, Chile, Peru, Brazil, Uruguay, Greece, Holland, Italy, Thailand, and Japan under the Military Defense Assistance Program. Some were modified and updated and remained in service in the U.S. Navy and U.S. Coast Guard as frigates well into the Viet Nam War era while others were put into the “Mothball Fleet” following he war.

Shortly after arriving at San Pedro, 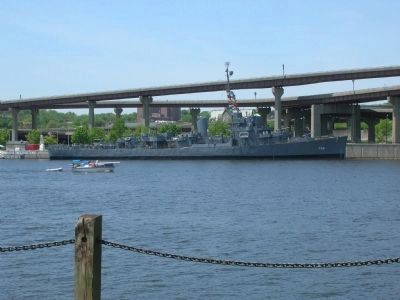 By Howard C. Ohlhous, May 15, 2008
6. U.S.S. Slater on the Hudson
The U.S.S. Slater moored on the west bank of the Hudson River with the I-787/US20/downtown Albany interchange in the background as seen from the Rensselaer side of the river.
U.S.S. SLATER received orders routing her to Norfolk, Virginia for deactivation. She arrived there on 26 March 1946 and was prepared for decommissioning. A month later she sailed for Green Cove Springs, Florida. On 13 February, 1947, three years to the day after her launching at Tampa, she was towed to Charleston, South Carolina. In May she was towed back to Green Cove Springs where she was placed in reserve, out of Commission.

On 1 March 1951, SLATER was selected to be one of four destroyer escorts transferred to the Greek government under the Military Defense Assistance Program (Truman Doctrine). Brought out of mothballs, she was re-christened AETOS (“Eagle”) D-01 by the Greeks, and saw forty years of service as a patrol and officer training vessel in the Hellenic Navy. AETOS appeared in the movie Guns of Navarone. She was retired from the Hellenic Navy in 1991.

Time: The Present–Saving the U.S.S. SLATER

In the early 1980s, the 15,000 member Destroyer Escort Sailors Association [DESA] began searching for a suitable museum ship. Their search eventually led them to AETOS, the last DE in her original rig and available for restoration. Negotiations with the Greek government produced an agreement that transferred ownership of AETOS directly to the Destroyer Escort Sailors Association. The members of DESA raised

By Howard C. Ohlhous, November 10, 2011
7. U.S.S. SLATER Marker Detail
Diagram of a WWII Destroyer Escort, highlighting its weaponry and design components.
$275,000 to secure the vessel and its transport from Crete to the United States. SLATER arrived in New York City at the end of the tow lines of a Ukranian seagoing tug on 27 August, 1993. She was moored at the U.S.S. INTREPID Sea-Air-Space Museum, Hudson River Pier 84 for the next four years. A contingent of volunteers from the Statue of Liberty Destroyer Escort Association (SOLDESA) and the New York City area began the clean-up and restoration work.

The Destroyer Escort Historical Foundation [DEHF] formed out of DESA to begin raising funds for restoration of the SLATER to her late-World War II configuration and to find her a permanent home. Their search was aided by the New York State Division of Military and Naval Affairs, whose Military History Branch coordinated the initial meetings between the Destroyer Escort Historical Foundation and the City of Albany. An agreement was sealed in July of 1997, and on Sunday, 26 October 1997 the U.S.S. SLATER arrived at the Port of Albany.

A new volunteer restoration crew began forming around Timothy Rizzuto, ship’s superintendent, to carry out the DEHF’s vision of restoration, and a five year work plan was devised to return the vessel to her 1945 rig. Aboard SLATER, docked nearly out of sight in the Port of Albany, the tedious, painstaking work began slowly. The work was focused on the ship’s exterior during the first 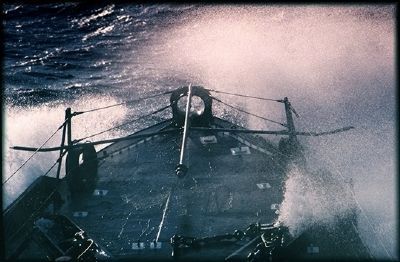 By Vangelis Rassias, August 1992
8. U.S.S. SLATER Marker
season, and SLATER was opened to visitors in the spring of 1998.

Of the 565 destroyer escorts that were launched during the war, SLATER is the only surviving destroyer escort afloat in her WWII rig. The force behind SLATER’s restoration has been the men who sailed ships like her during and after World War II and who continue to donate their time, money and labor to keep their legacy alive. We invite you to join them in their efforts and welcome your financial contributions–funds that all go directly into the continuing restoration of Albany’s One-Ship Navy: U.S.S. SLATER (DE-766).

This plaque is placed here in recognition of the volunteers from New York City and Albany areas, SOLDESA, and Destroyer Escort veterans everywhere who have worked, and who continue to work, to make this restoration a reality.

[Diagram of a WWII destroyer escort, highlighting its weaponry and design components.]

Erected by Destroyer Escort Historical Foundation and the City of Albany.

Topics. This historical marker is listed in these topic lists: War, World II • Waterways & Vessels. A significant historical date for this entry is February 13, 1944.