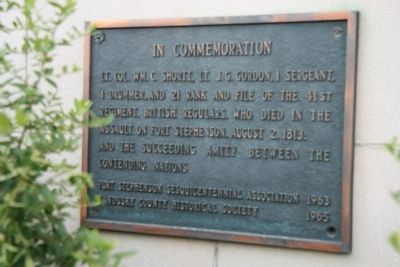 By Dale K. Benington, August 6, 2008
1. In Commemoration Marker
The "In Commemoration" marker is located bolted to the outside of this building, and it is obscured from view by a large bush, growing directly in front of it.
Inscription.
In Commemoration. . Lt. Colonel Wm. C. Shortt, Lt. J.G. Gordon, 1 sergeant, 1 drummer, and 21 rank and file of the 41st Regiment, British regulars, who died in the assault on Fort Stephenson, August 2, 1813, and the succeeding amity between the contending nations. . This historical marker was erected by Fort Stephenson Sesquicentennial Association 1963 and Sandusky County Historical Society 1965. It is in Fremont in Sandusky County Ohio

Lt. Colonel Wm. C. Shortt, Lt. J.G. Gordon, 1 sergeant, 1 drummer, and 21 rank and file of the 41st Regiment, British regulars, who died in the assault on Fort Stephenson, August 2, 1813, and the succeeding amity between the contending nations.

Topics. This memorial is listed in these topic lists: Forts and Castles • War of 1812. A significant historical year for this entry is 1813.

Location. Marker is missing. It was located near 41° 20.717′ N, 83° 6.979′ W. Marker was in Fremont, Ohio, in Sandusky County. Memorial was at the intersection of Garrison St. and High on Garrison St.. This historical marker is located just to the northwest of the intersection of Garrison St. and High St., and it has been secured to the outside wall of what is presently a public school building, but as of the Spring of 2009 the city of Fremont is hoping to sell (and so there is no telling what its future use will be). For whatever the reason, there is currently a large bush 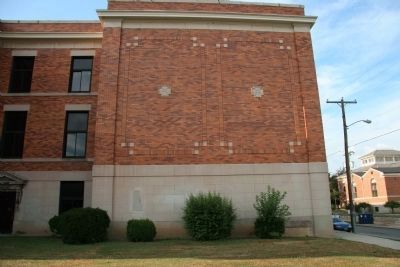 By Dale K. Benington, August 6, 2008
2. In Commemoration Marker
The view of where this historical marker is located, on the north side of Garrison St., on the outside wall of the publc school building, hidden from view by having a large bush growing up in front of it.

Click or scan to see
this page online
growing in front of this marker and it acts to completely obscure this marker from the public's view. Touch for map. Marker was at or near this postal address: 529 Garrison St, Fremont OH 43420, United States of America. Touch for directions.

More about this marker. It is my understanding that while constructing a new wing to the public school building, that was situated just to the west of what had been Fort Stephenson, that workers came across the unmarked buried remains of two, long forgotten, British officers. Research led the community to believe that these were the remains of the two officers that had been killed in the battle for Fort Stephenson, and then their bodies left behind by Gen. Proctor.


It was later decided that a commemorative plaque should be placed upon the outside wall, of this newly constructed wing, along the north side of Garrison St., in order to honor these war dead.

Regarding In Commemoration. When visiting the former site of this historic marker on September 19, 2012, I noted that the building that the marker was affixed to had recently been torn down, and that the historic marker was missing. I was told that it is currently in storage, and that at some future date it will once again be put on display at this site. 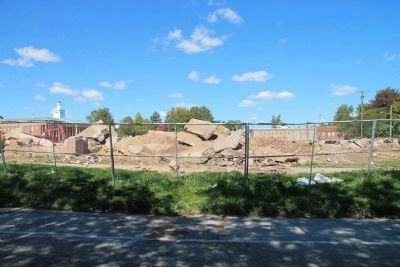