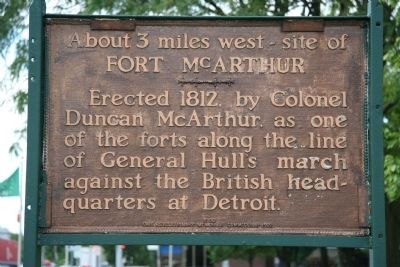 Photographed By Dale K. Benington, June 17, 2008
1. Fort McArthur Marker
Inscription.
Fort McArthur. Ohio Revolutionary Memorial Trail.
About 3 miles west - site of Fort McArthur »»«« Erected 1812, by Colonel Duncan McArthur, as one of the forts along the line of General Hull's march against the British head- quarters at Detroit.. . This historical marker was erected in 1930 by Ohio Revolutionary Memorial Commission. It is in Kenton in Hardin County Ohio

About 3 miles west - site of
Fort McArthur
»»««
Erected 1812, by Colonel
Duncan McArthur, as one
of the forts along the line
of General Hull's march
against the British head-
quarters at Detroit.

Topics and series. This historical marker is listed in these topic lists: Forts and Castles • War of 1812. In addition, it is included in the Ohio Revolutionary Memorial Commission series list. A significant historical year for this entry is 1812. 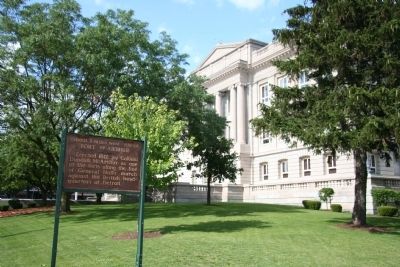 More about this marker. Although this historical marker is located in downtown Kenton, Ohio, on the front lawn of the Hardin County Courthouse, it is not situated at the actual site of Fort McArthur. The actual location of this War of 1812 era fortification is about 3 miles, to the WSW, outside of town, on the banks of the Scioto River.

Regarding Fort McArthur. Shortly before the start of the War of 1812 the American General William Hull, the commander of the American fortification on Michigan's border with Canada (located in Detroit), believed that unless his position was reinforced with additional troops, that his command would be in serious trouble once the war finally got under way. So he took it upon himself to travel down to southern Ohio in order to raise those additional troops.

As soon as General Hull had raised himself an army of soldiers, he began to march northward from Urbana, Ohio. Since much of the territory between Urbana and Detroit was a hostile wilderness through both territory controlled by pro-British Native Americans and an inhospitable region know as the Black Swamp, General Hull built a string of fortifications, along his route, in order to protect his lines of supply and communication. One of those 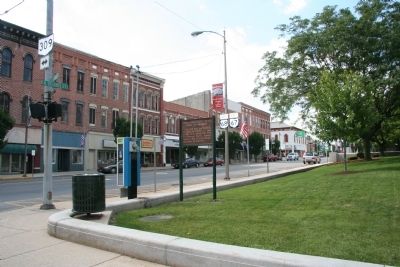 Photographed By Dale K. Benington, June 17, 2008
3. Fort McArthur Marker
View of the historical marker situated near the intersection of US 68 and State Route 309. Much of General Hull's Trail northward, from Urbana, Ohio to Findlay, Ohio, follows modern day US 68.
fortifications, built to protect the crossing of the Scioto River, was Fort McArthur.

Also see . . .
1. Hull's Road. This is a link to information provided by Ohio History Central, an online encyclopedia of Ohio History. (Submitted on August 13, 2010, by Dale K. Benington of Toledo, Ohio.) 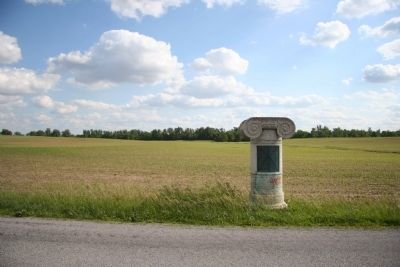 Photographed By Dale K. Benington, June 17, 2008
4. Fort McArthur Marker
View of the historical marker that is located near the actual site of Fort McArthur, 3 some miles from the Hardin County courthouse. The actual site of the fort is along the tree line that is situated along the banks of the Scioto River, which is in the background of the picture. 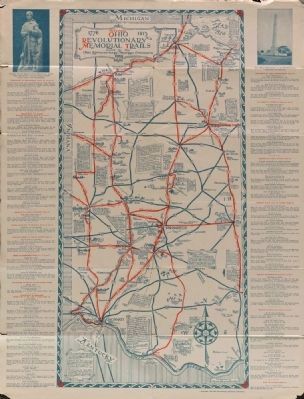