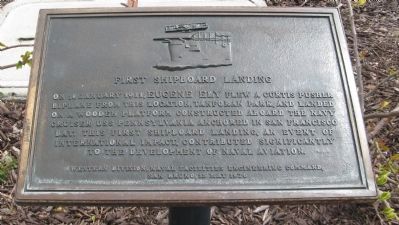 Photographed By Syd Whittle, April 24, 2009
1. First Shipboard Landing Marker
Inscription.
First Shipboard Landing. . On 18 January 1911, Eugene Ely flew a Curtis Pusher biplane from this location, Tanforan Park, and landed on a wooden platform constructed aboard the Navy Cruiser USS Pennsylvania anchored in the San Francisco Bay. The first shipboard landing, an event of international impact, contributed significantly to the development of Naval aviation. . This historical marker was erected in 1976 by Western Division Naval Facilities Engineering Command, San Bruno, 15 May 1976. It is in San Bruno in San Mateo County California

On 18 January 1911, Eugene Ely flew a Curtis Pusher biplane from this location, Tanforan Park, and landed on a wooden platform constructed aboard the Navy Cruiser USS Pennsylvania anchored in the San Francisco Bay. The first shipboard landing, an event of international impact, contributed significantly to the development of Naval aviation.

Topics. This historical marker is listed in these topic lists: Air & Space • Waterways & Vessels. A significant historical date for this entry is January 18, 1911. 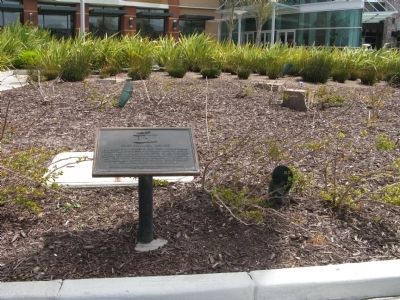 More about this marker. Marker is located at the entrance to the Tanforan Shopping Center.

Also see . . .
1. Eugene Burton Ely. Shortly before 11 AM on the morning of 18 January 1911, after the usual weather-driven delays, Ely took off from Tanforan racetrack. Pennsylvania was anchored off the San Francisco waterfront, in full view of thousands of spectators ashore, on ships at the city piers, and in a flock of small craft gathered around the cruiser. The little Curtiss pusher biplane came into view, flew around ship to check arrangements and set up the landing course, and then came in toward Pennsylvania's stern. Ely was prepared to handle the existing tailwind, but apparently did not expect the updraft that struck his lightly-loaded plane just as it reached the platform. Fortunately, he responded quickly, dove and snagged the arresting gear about halfway up its length. The Curtiss pulled ropes and sandbags to a smooth stop before reaching any of the safety barriers.
Wikipedia replacement for this broken 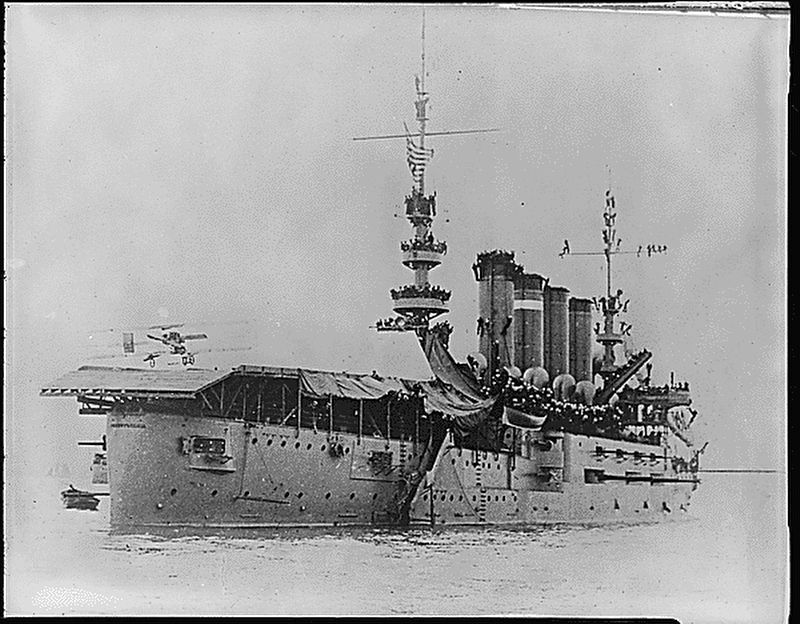 2. California National Guard's First (Naval) Aviator Eugene Burton Ely, by Mark J. Denger. "In February 1910, shortly following America's First International Air Meet in Los Angeles, E. Henry Wemme purchased one of Curtiss' first 4-cylinder Biplanes and took the agency for them in the Northwest. However, having never flown, nor having any actual knowledge of aircraft, Wemme found himself unable to fly it. Eugene Ely offered to try to fly the little 4-cylinder plane, but only wound up crashing instead. Feeling so badly about the mishap, Ely bought the wreck from Wemme. With a plane of his own, he soon made the necessary repairs, then very cautiously proceeded to teach himself to fly. He acquired the feel in the air quickly and by April, 1910, was making short straightaway hops. For the next two months he continued to practice with the new contraption and soon mastered the little flying machine." (Submitted on April 28, 2009.)

3. The First Flight Society. On January 18, 1911, Ely successfully executed the first airplane landing on a ship, again in a Curtiss airplane. He departed Tanforan Field near San Francisco wearing a padded football helmet and a bicycle tube as a survival vest. Haze obscured his view of the cruiser USS Pennsylvania, anchored in San Francisco 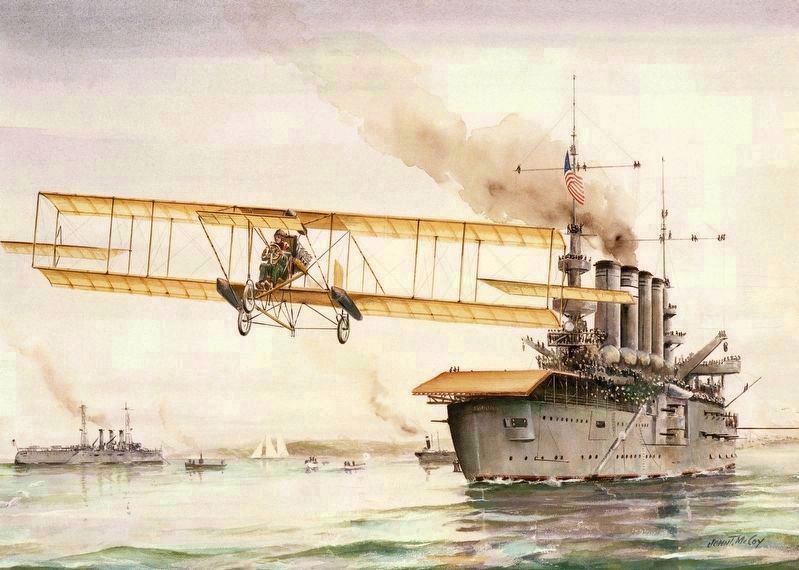 Artwork by John McCoy, 1984
4. World’s Second Nautical Takeoff*
“Eugene Ely Taking Off from the USS Pennsylvania, July 18, 1911.” He had landed earlier that day. From the National Archives Catalog, Records of the Office of the Secretary of Defense. *The first takeoff was also by Ely on November 14, 1910, off the USS Birmingham in Norfolk, Virginia. If you click on the image to expand it you can see the grappling hooks that snagged the arresting wires during landing.
Bay. He landed on a specially designed tilted platform at a speed of 40 miles per hour and was slowed to a gentle stop by grappling hooks fitted underneath the aircraft that caught arresting wires attached to sandbags. After a leisurely lunch on board ship, Ely made the world's second nautical takeoff and returned to shore. (Submitted on April 28, 2009.)
Credits. This page was last revised on September 20, 2020. It was originally submitted on April 28, 2009, by Syd Whittle of Mesa, Arizona. This page has been viewed 6,103 times since then and 115 times this year. It was the Marker of the Week January 13, 2019. Photos:   1, 2. submitted on April 28, 2009, by Syd Whittle of Mesa, Arizona.   3, 4. submitted on January 12, 2019, by J. J. Prats of Powell, Ohio.
Share this page.