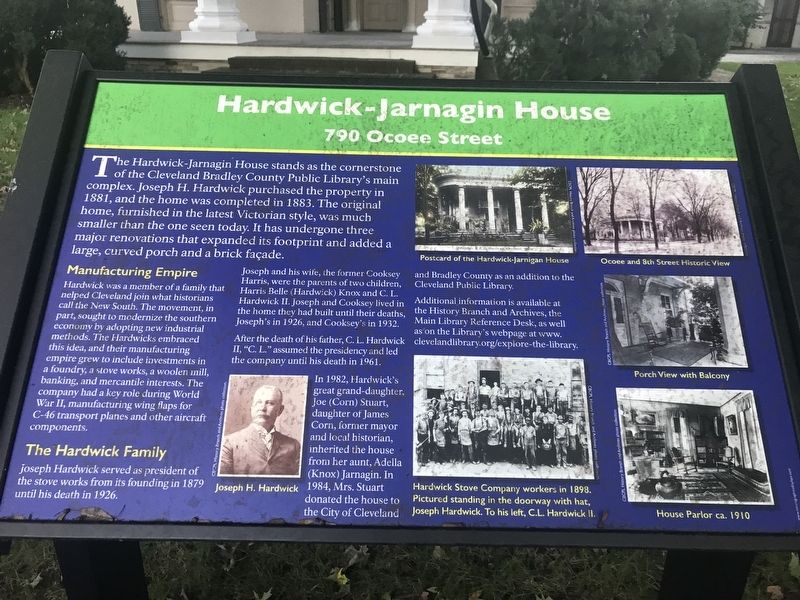 The Hardwick-Jarnagin House stands as the cornerstone of the Cleveland Bradley County Public Library's main complex. Joseph H. Hardwick purchased the property in 1881, and the home was completed in 1883. The original home, furnished in the latest Victorian style, was much smaller than the one seen today. It has undergone three major renovations that expanded its footprint and added a large, curved porch and a brick façade.

Manufacturing Empire
Hardwick was a member of a family that helped Cleveland join what historians call the New South. The movement, in part, sought to modernize the southern economy by adopting new industrial methods. The Hardwicks embraced this idea, and their manufacturing empire grew to include investments in a foundry, a stove works, a woolen mill, banking, and mercantile interests. The company had a key role during World War II, manufacturing wing flaps for C-46 transport planes and other aircraft components.

The Hardwick Family
Joseph Hardwick served as president of the stove works from its founding in 1879 until his death in 1926. Joseph and his wife, the former Cooksey Harris, 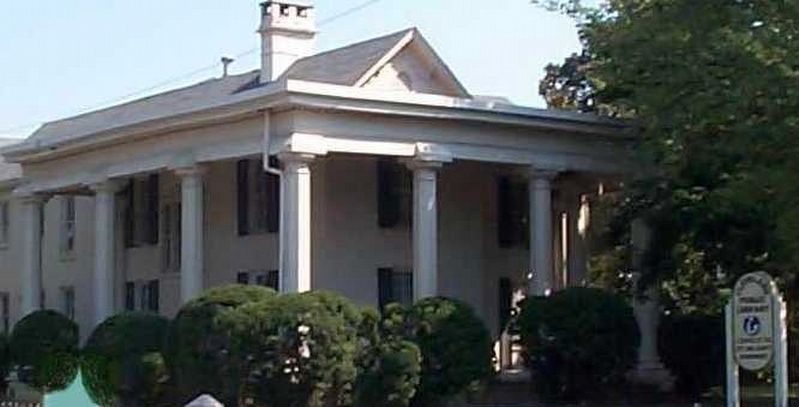 Click or scan to see
this page online
were the parents of two children, Harris Belle (Hardwick) Knox and C. L. Hardwick II. Joseph and Cooksey lived in the home they had built until their deaths, Joseph's in 1926, and Cooksey's in 1932.

After the death of his father, C. L. Hardwick II, “C. L.” assumed the presidency and led the company until his death in 1961.

In 1982, Hardwick's great grand-daughter, Joe (Corn) Stuart, daughter of James Corn, former mayor and local historian, inherited the house from her aunt, Adella (Knox) Jarnagin. In 1984, Mrs. Stuart donated the house to the City of Cleveland and Bradley County as an addition to the Cleveland Public Library.

Additional information is available at the History Branch and Archives, the Main Library Reference Desk, as well as on the Library's webpage at www.clevelandlibrary.org/explore-the-library.

Topics. This historical marker is listed in these topic lists: Architecture • Industry & Commerce. A significant historical year for this entry is 1883.

Editor’s want-list for this marker. Wide shot of marker and surrounding area in context. • Can you help?
Share this page.