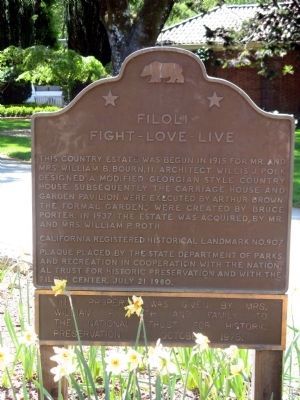 Photographed By Syd Whittle, April 24, 2009
1. Filoli Marker
Lower Plaque reads:
This property was given by Mrs. William P. Roth and Family to the National Trust for Historic Preservation in October 1975.
Inscription.
Filoli. Fight – Love – Live. This country estate was begun in 1915 for Mr. and Mrs. William B. Bourn, II. Architect Willis J. Polk designed a modified Georgian Style country house. Subsequently the carriage house and garden pavilion were executed by Arthur Brown. The formal gardens were created by Bruce Porter. In 1937 the estate was acquired by Mr. and Mrs. William P. Roth. . This historical marker was erected in 1980 by State Dept. of Parks and Recreation, National Trust for Historic Preservation and Filoli Center.. It is in Woodside in San Mateo County California

This country estate was begun in 1915 for Mr. and Mrs. William B. Bourn, II. Architect Willis J. Polk designed a modified Georgian Style country house. Subsequently the carriage house and garden pavilion were executed by Arthur Brown. The formal gardens were created by Bruce Porter. In 1937 the estate was acquired by Mr. and Mrs. William P. Roth.

Topics and series. This historical marker is listed in these topic lists: Architecture • Industry & Commerce • Settlements & Settlers. In addition, it is included in the California Historical Landmarks series list. A significant historical date for this entry is July 21, 1980.

Location. 37° 28.23′ N, 122° 18.59′ W. Marker is in Woodside, California, in San Mateo County. Marker can be reached from Canada Road. Marker is located on the grounds of the Filoli Estate. Touch for map. Marker is at or near this postal address: 86 Canada Road, Redwood City CA 94062, United States of America. Touch for directions.

Other nearby markers. At least 8 other markers are within 4 miles of this marker, measured as the 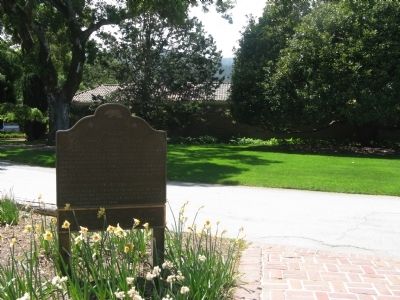 More about this marker. This site is a fee area, open for self-guided tours from Mid-February to late October.

This site was designated as California Registered Historical Landmark No. 907 on February 8, 1977.

Regarding Filoli. The Mansion at Filoli was used as the “Carrington Mansion” in the opening scene of the popular TV show - Dynasty

Also see . . .  Filoli. Located 30 miles south of San Francisco, Filoli is an historic site of the National Trust for Historic Preservation and one of the finest remaining country estates of the early 20th century. (Submitted on April 29, 2009, by Syd Whittle of Mesa, Arizona.)

Additional commentary.
1. Filoli
Filoli was built for Mr. & Mrs. Bourne, whose chief source of wealth came from the Empire Mine, a hard-rock gold mine in Grass Valley, California. Mr. Bourne was also the owner and president of the Spring Valley Water Company. He chose the southern end of Crystal Springs 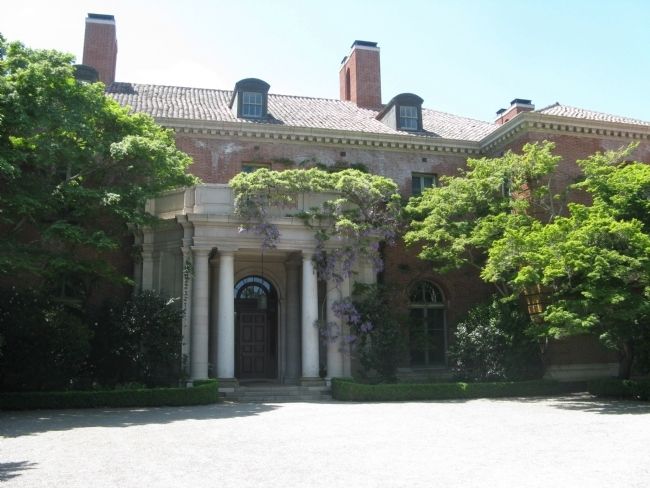 Photographed By Syd Whittle, April 24, 2009
3. Main Entrance
Lake as the site for his estate. He arrived at the name of Filoli by combining the words “Fight for just cause; Love your fellow man; Live a good life”

Construction began in 1915 and the Bournes moved into the house in 1917. Both Mr. & Mrs. Bourne died in 1936 and the estate was sold to Mr. & Mrs. William P. Roth, who owned the Matson Navigation Company. Mrs. Roth lived in this house until 1975 when she donated 125 acres, along with the house and gardens to the National Trust for Historic Places. The remaining acreage was given to the Filoli Center.
— Submitted April 29, 2009, by Syd Whittle of Mesa, Arizona. 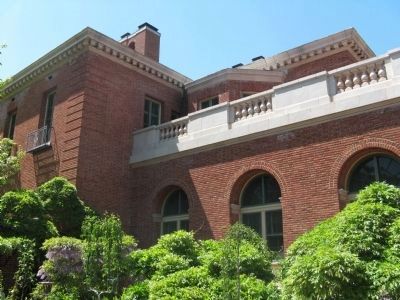 Photographed By Syd Whittle, April 24, 2009
4. View of Mansion from Side Garden 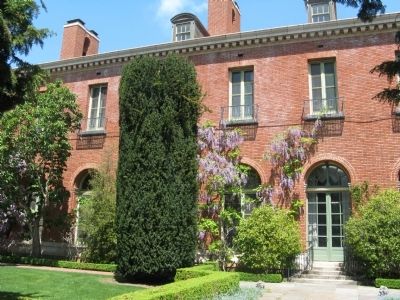 Photographed By Syd Whittle, April 24, 2009
5. One of Several Side Entrances 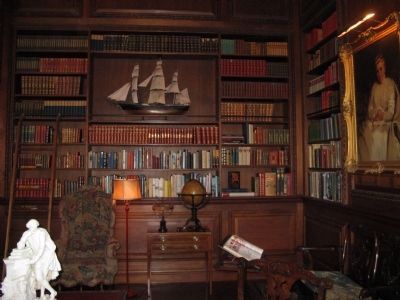 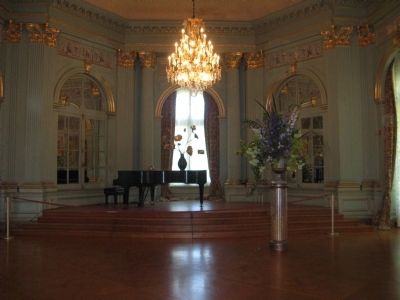 Photographed By Syd Whittle, April 24, 2009
7. Ballroom
This room is thirty-two feet wide and seventy feet long, with a ceiling of twenty-two-and-a-half feet. The flooring is oak parquet. The walls are the original "watergreen" paint trimmed with gold leaf. 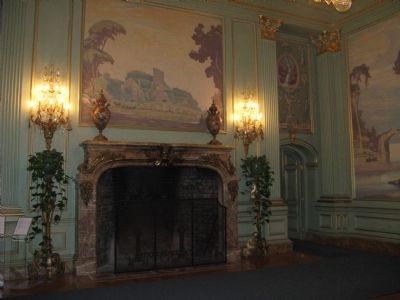 Photographed By Syd Whittle, April 24, 2009
8. Ballroom Fireplace
The massive baroque fireplace is made of Machiavelli marble and decorated with ormolu depictions of Hercules and the Nemean Lions. 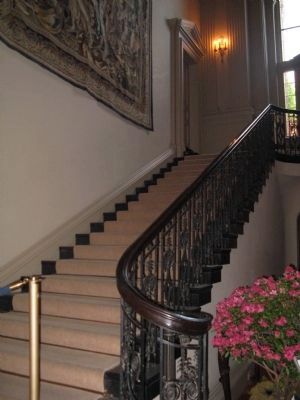 Photographed By Syd Whittle, April 24, 2009
9. The Stairwell and North Hall
The grand staircase is the most important architectural element at the north end of the transverse hall. Its impact is stronger because it is unseen from the main entrance and must be discovered. The forty risers leading up to the second floor are of black Belgian marble with a balustrade of filigree-style wrought iron, topped by a dark brown wooden rail. Each of the first four steps is carved from solid Belgian marble with the remaining steps composed of two-inch thick marble treads and risers. 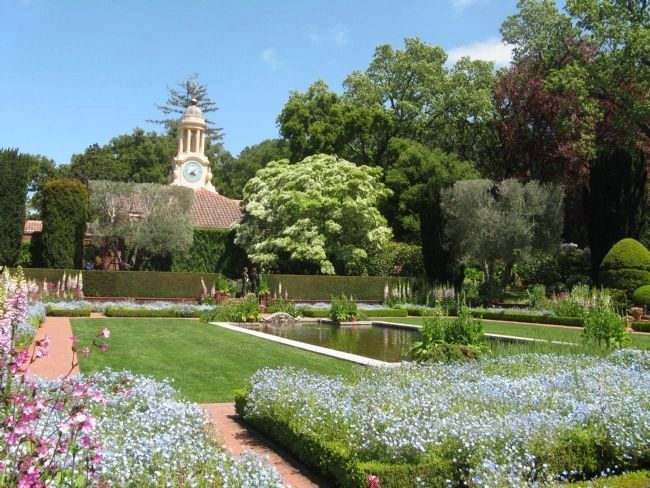 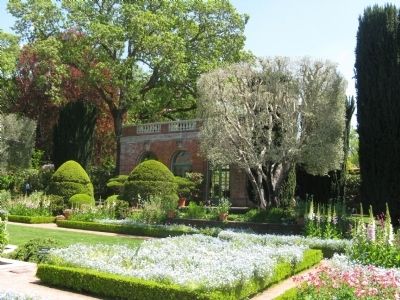