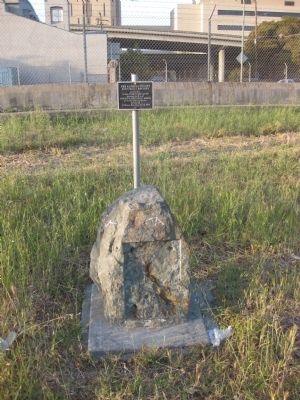 Location. Marker has been reported missing. It was located near 37° 47.91′ N, 122° 16.675′ W. Marker was in Oakland, California, in Alameda County. Marker was at the intersection of Fourth Street and Clay Street, on the left when traveling east on Fourth Street. Touch for map. Marker was in this post office area: Oakland CA 94607, United States of America. Touch for directions.

More about this marker. The marker is missing. Its former location is easy to find, however, as there is a large rock upon which the marker was mounted, along with a 3 feet high steel pole with a small sign on it directly behind the rock. 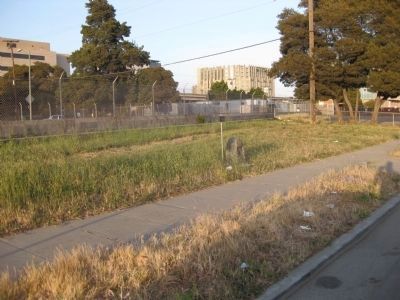 Click or scan to see
this page online
first school, built in July, 1853, and described as "substantial, elegant and commodious", opened with Miss Hannah Jayne as the first teacher. The building was subsequently relocated to the corner of West and Seventh Streets, and eventually became a church.

Also see . . .  Alameda County Landmarks. The Alameda County Historical Society's listing of historical landmarks within the county, as well a list of the plaques they have placed and their locations. (Submitted on May 2, 2009.) 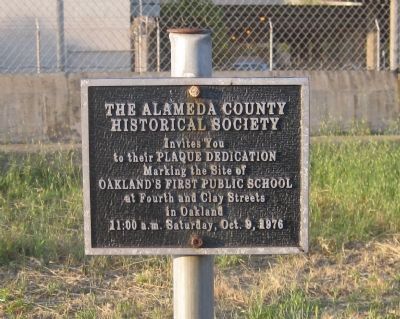 Photographed By Andrew Ruppenstein, April 26, 2009
3. Oakland's First Public School Marker - Invitiation to the Dedication
Although the marker itself is missing, directly behind the rock upon which the marker was mounted is a steel pole upon which is fastened a sign reading, "The Alameda County Historical Society ivites you to their PLAQUE DEDICATION marking the site of Oakland's first public school at Fourth and Clay Streets in Oakland 11:00 a.m. Saturday, Oct. 9, 1976"
Credits. This page was last revised on June 16, 2016. It was originally submitted on May 2, 2009, by Andrew Ruppenstein of Sacramento, California. This page has been viewed 1,315 times since then and 8 times this year. Photos:   1, 2, 3. submitted on May 2, 2009, by Andrew Ruppenstein of Sacramento, California. • Syd Whittle was the editor who published this page.

Editor’s want-list for this marker. Picture and inscription of the missing marker. • Can you help?
Share this page.