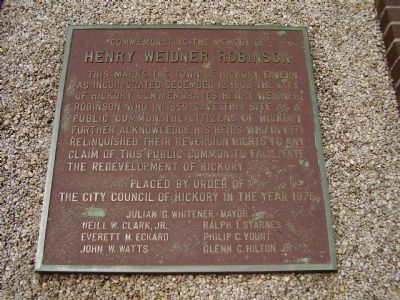 Commemorating the memory of Henry Weidner Robinson This marks the town of Hickory Tavern as incorporated December 12, 1863. The city of Hickory Commemorates Henry Weidner Robinson who in 1859 gave this site as a public common. The citizens of Hickory Further acknowledge his heirs who in 1971 relinquished their reversion rights to any claim of this public common to facilitate the redevelopment of Hickory.
Placed by order of The city Council of Hickory in the Year 1976
Julian G. Whitener, Mayor
Neill W. Clark Jr. • Ralph L. Starnes • Everett M. Eckard • Philip C. Yount • John W. Watts • Glenn C. Hilton Jr.

Topics. This historical marker is listed in this topic list: Settlements & Settlers. A significant historical date for this entry is December 12, 1935. Click or scan to see
this page online
(about 300 feet away, measured in a direct line); Frame Church (about 800 feet away); Claremont College (approx. 0.4 miles away); Piedmont Wagon Company (approx. ¾ mile away); Lenoir Rhyne (approx. 0.9 miles away); "Miracle of Hickory" (approx. 2.3 miles away). Touch for a list and map of all markers in Hickory. 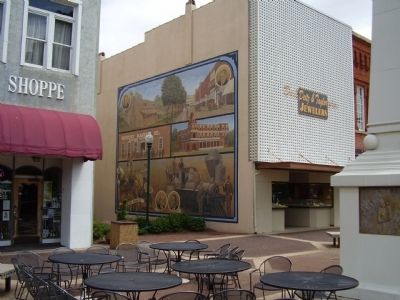 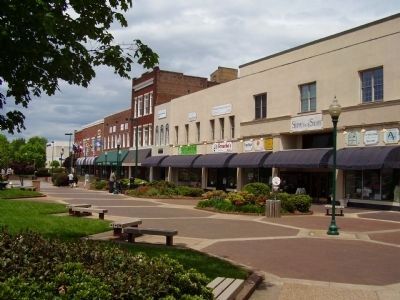 Photographed By Stanley and Terrie Howard, May 2, 2009
4. Hickory 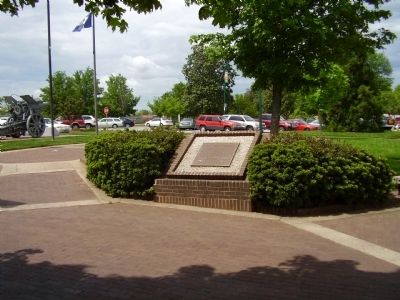