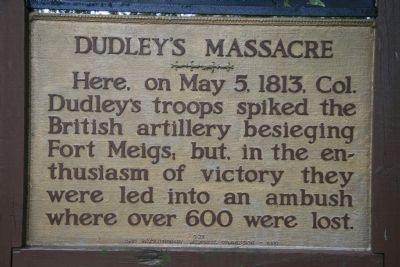 Dudley's Massacre
»»««
Here, on May 5, 1813, Colonel
Dudley's troops spiked the
British artillery besieging
Fort Meigs; but, in the en-
thusiasm of victory they
were led into an ambush
where over 600 were lost.

Topics and series. This historical marker is listed in these topic lists: Military • Native Americans • War of 1812. In addition, it is included in the Ohio Revolutionary Memorial Commission series list. A significant historical month for this entry is May 1870.

Location. 41° 34.013′ N, 83° 38.735′ W. Marker is in Maumee, Ohio, in Lucas County. Marker is on River Road, 0.1 miles north of East John Street, on the right when traveling south. This historical marker is located in front of the Maumee branch of the Toledo-Lucas County Public Library, on the River Road side of the library. Touch for map. Marker is in this post office area: Maumee OH 43537, United States of America. Touch for directions.

Other nearby markers. At least 8 other markers are within walking distance of this marker. The Old Plantation (approx. 0.2 miles away); House of Four Pillars 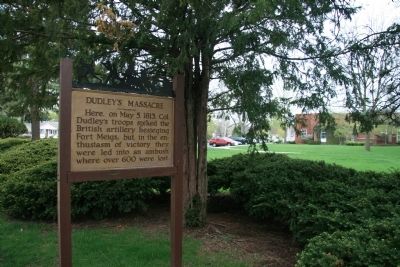 Photographed By Dale K. Benington, April 28, 2009
2. Dudley's Massacre Marker
View of the historical marker in foreground with the public library in the right background.

More about this marker. The events described on this marker, that took place at this location, on May 5, 1813, are part of a series of events that are described in a series of related markers. The pre-massacre events would involve information described on historical markers to the south, at Maumee's First Presbyterian Church and at Perrysburg's Fort Meigs. The post-massacre events would involve information described on the historical marker located to the north, at Maumee's Fort Miamis Park.

Regarding Dudley's Massacre. In his book "History of the Maumee River Basin" (copyright 1905), Charles E. Slocum writes the following concerning Dudley's Massacre: "That night about eleven o'clock General Harrison's anxiety regarding reinforcements was largely relieved by the return of Captain Oliver accompanied by Major David Trimble and fifteen soldiers who had evaded the savages, to report that General Green Clay's command, eleven hundred in number in eighteen large flatboats with high sides to protect the soldiers from the bullets of the savages they might meet, were tied on the left bank of the Maumee at the head of the Grand Rapids, the river being so high that the pilot declined to run the rapids in such a dark night unless commanded 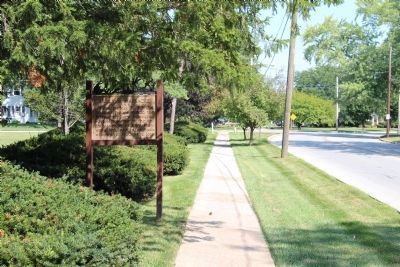 Photographed By Dale K. Benington, September 5, 2014
3. Dudley's Massacre Marker
View of the historical marker looking north along River Road.
so to do. Captain Hamilton with a subaltern and canoe was dispatched to meet General Clay and say to him as the command of General Harrison: 'You must detach about eight hundred men from your brigade, who will land at a point I [Hamilton] will show, about one or one and a half miles above Fort Meigs and I will conduct them to the British batteries on the left bank of the river. They must take possession of the enemy's cannon, spike them, cut down the carriages, then return to their boats and cross over to the Fort. The balance of your men must land on the Fort side of the River, opposite the first landing, and fight their way to the Fort through the savages. The route they must take will be pointed out by a subaltern officer now with me, who will land the canoe on the right bank of the river to point out the landing for the boats.'"

"It was some time after daylight before the oncoming boats arrived at Hamilton's station about five miles above the Fort. Colonel William Dudley was in the first boat and General Clay in the thirteenth from the front. When the orders were delivered to him General Clay ordered Colonel Dudley as the senior Colonel to assail the batteries as directed by General Harrison, with the men in the first twelve boats; while he, with the others, would go forward to the Fort."

"Colonel Dudley executed his prescribed task most gallantly and successfully 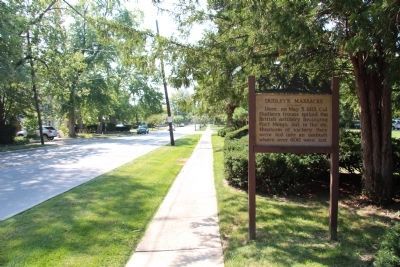 Photographed By Dale K. Benington, September 5, 2014
4. Dudley's Massacre Marker
View of the historical marker looking south along River Road.
up to the capture of the batteries. His command arrived near the batteries (which were in full action) unobserved, the right led by Dudley the left led by Major Shelby and the center as a reserve by Acting Major Morrison. Captain Combs with thirty riflemen, including seven friendly Aborigines, were in front and on the left flank a hundred yards distant. The columns marched so as to present a semicircular front to the enemy, Major Shelby's command passing around between the batteries and the British camp. The orders were to move quietly, but savages fired on Dudley's troops when near the batteries and, with a shout, they charged. The gunners fled, the Americans rushed forward to the guns, spiked eleven of the largest (unfortunately, the spikeing of the cannon could then be done only with ramrods, instead of with the usual files or other short, hard pieces of metal that could be broken at level with guns, which were readily removed by the British after their recapture, and the guns were again used against the Americans) and hauled down the enemy''s flag, which action caused loud applause at the Fort. Not one American had been killed in this successful charge - but dire results awaited the exulting soldiers from their non-compliance with the orders of General Harrison to start for the Fort as soon as the batteries were disabled. Some savages fired at Captain Combs' riflemen, the fire 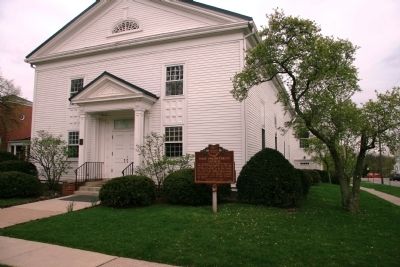 Photographed By Dale K. Benington, April 28, 2009
5. First Presbyterian Church
View of First Presbyterian Church, in Maumee, Ohio, the site of one of the British gun batteries attacked by Colonel Dudley and his men.
was returned, and others on both sides rushed to the support of their friends. The Americans were anxious for a combat and, notwithstanding their short thirty days presence in the army and want of discipline, they impetuously drove their opposers back into the woods, pursuing them promiscuously until the pursuers were confused, and surrounded by superior numbers of Aborigines and British who rallied, particularly between them and the river, preventing their escape. Major Shelby remained at the captured batteries until a rallying force of British drove his soldiers toward their boats, regaining their batteries; he rallied a few of his men and endeavored to follow after Colonel Dudley, but they, like the main force, were soon involved in disorder and captured."

"Colonel Dudley landed with eight hundred and sixty-six men - his regiment numbering seven hundred and sixty-one and, in addition there were sixty of Colonel William E. Boswell's regiment and forty-five United States troops. Only one hundred and seventy escaped to Fort Meigs. Many were killed, including Colonel Dudley, in the fierce contest that continued about three hours. Many others were wounded, scalped and stripped of clothing by the savages. Those who could walk were taken prisoners by the British and were started for the ruins of Fort Miami near their encampment. Some were slain by the savages while on this 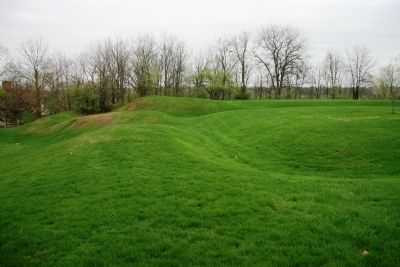 Photographed By Dale K. Benington, April 28, 2009
6. Fort Miamis
View of the site of Fort Miamis, where the American prisoners were taken and made to run the gauntlet.
march; and the stripping of Americans dead and alive of their clothing and possessions was freely indulged in. At Fort Miami the prisoners were compelled to run the gauntlet where many more were killed by the savages with war clubs, scalping knives, tomahawks and pistols."

In order to accomplish this, in 1929 the state of Ohio created the Ohio Revolutionary Memorial Commission, and then in 1930 this commission created 22 military trails, throughout western Ohio, between Cincinnati, Ohio on the state's southern border and Toledo, Ohio on the state's northern border. Each of these military trails represented the routes, or trails, used by military leaders during either the Revolutionary War, the Indian Wars of 1790 to 1795, or 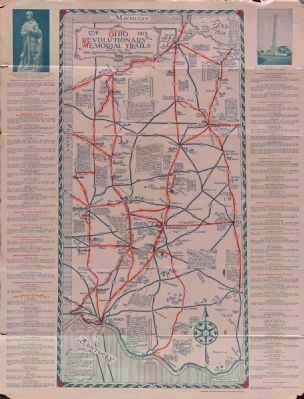 Originally, back in 1930, there were erected 70 some of these Ohio Revolutionary Memorial Commission, type C, markers. To date, there are only 20 some of them that have been located and posted on the Historical Marker database. A number of them are presently missing.

Of the 20 some original markers that have been included in the historical marker database only a small number of them have the original art work, sometimes referred to as silhouettes, across the top of the historical marker. This is a feature that makes these markers quite unique from most other historical markers. This "Dudley's Massacre" marker is one of those very few markers.
— Submitted September 7, 2014, by Dale K. Benington of Toledo, Ohio. 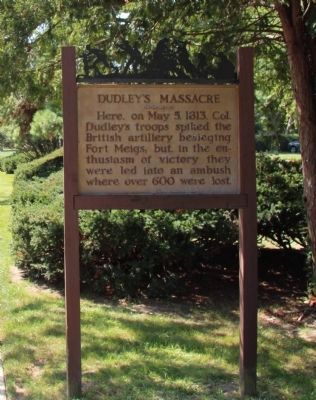 Photographed By Dale K. Benington, September 5, 2014
9. Dudley's Massacre Marker
View of the historical marker showing the unique art work, sometimes referred to as a silhouette, across the top of the marker.