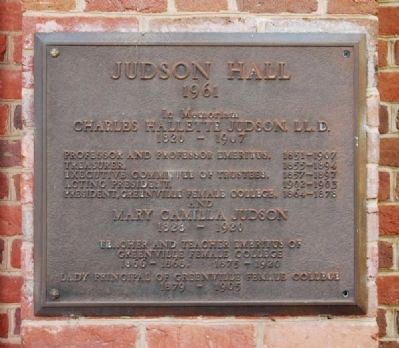 Topics. This historical marker is listed in these topic lists: Education • Women.

Other nearby markers. At least 10 other markers are within walking distance of this marker. Clark Murphy Housing Complex (a few steps from this marker); The Earle Infirmary (about 400 feet away, measured in a direct line); John E. Johns Hall 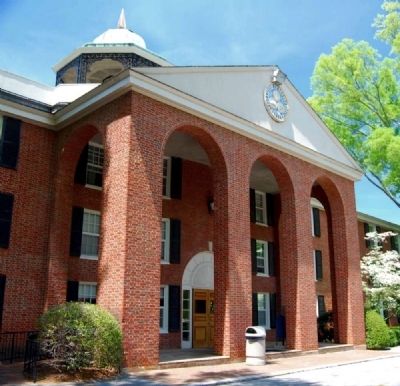 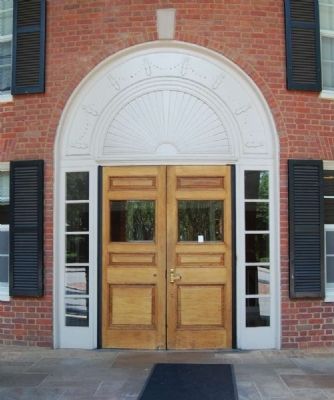 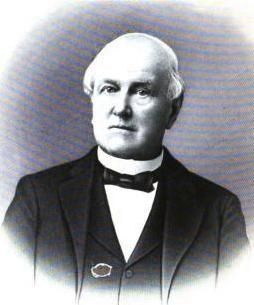 Photographed By Brian Scott
4. Charles Hallette Judson, LL.D
(1820-1901)
in 1851 Charles became associated with Furman University, an association that would last the remainder of his life. He was appointed the first member of its faculty and continued to serve the University until his death in 1907. During his life he contributed more than $50,000 to the support of the university and was credited with saving the university during its time of need. He was professor and professor emeritus of math, 1851-1907, treasurer, 1855-94, member of the executive committee of the board of trustees, 1857-97, and acting president of the university, 1902-3. (Source: http://www.anniebees.com/Drewry/Drewrys%20In%20Education.htm.)
— Submitted May 10, 2009, by Brian Scott of Anderson, South Carolina.
3. More About Charles Hallette Judson
JUDSON, CHARLES HALLETTE, LL. D., professor of mathematics and astronomy in Furman university, Greenville, South Carolina, was born in Monroe, Connecticut, April 20, 1820. His parents were both of pure English stock. His father, Charles Judson, was a man of sterling qualities and became one of the most prominent men in his community in business and social circles. He was noted for a high sense of honor, a strict adherence to principle and rare good judgment. While not having a collegiate education, he was by nature gifted with a fine 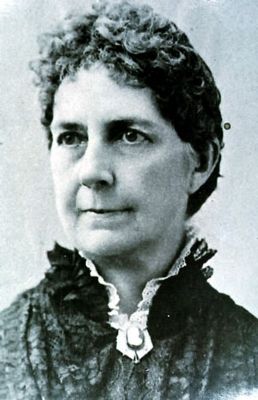 Photographed By Brian Scott
5. Mary Camille Judson
(1828-1920)
mind, which was cultivated by reading, by keen observation and by association with men of education and culture. His grandfather, James Judson, lived and died in Connecticut, and was distinguished for his sterling worth, business habits and correct principles. The mother of Dr. Charles H. Judson, wife of Charles Judson, was Miss Abi Sherman, and a relative of the distinguished Roger Sherman.

Professor Judson's earliest education was obtained at the public school in his own town. From this he was sent to a high school near his home, taught by a graduate of Yale. He was afterwards sent to New Haven to prepare himself for business. Not long after going to that city he became interested in meetings in one of the Baptist churches of the place. He professed faith and joined the Baptist church. At about the same time, Locke's "Essay on the Human Understanding" fell into his hands. These two circumstances combined to change the current of his life. As a result, he resolved upon leaving business and continuing studies. He entered Hamilton Literary and Theological institute, located at Hamilton, New York. He remained there two years and was then compelled to teach for awhile to obtain means with which to prosecute his studies. Ever since that day he has been able to sympathize with the poor boy struggling for an education. He went from Hamilton to Virginia, where he taught several 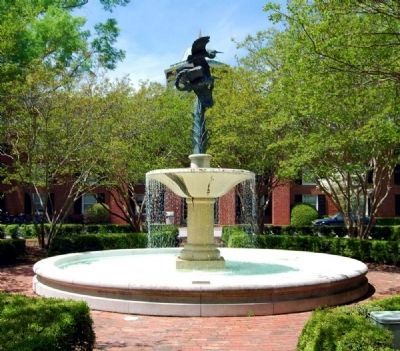 Photographed By Brian Scott, April 25, 2009
6. The Great Egrets by Lee Harold Letts
From the Judson Hall (in background) entrance, looking south.
years, and then entered the University of Virginia, where he remained two years. This course helped him to shape his work as a teacher for life. There he formed high ideals as to what a college ought to be, and these high ideals he has had before him for fifty years and more, and this has largely made Furman university what it is.

1847 he married Miss Emily Bosher, of Richmond, Virginia. Together they walked life's journey, till May, 1903, when she entered her heavenly rest. Soon after their marriage he began teaching a boys' school in Loudon, Virginia. After two years here he went to Warrenton, Virginia, where he remained teaching one year. While at Warrenton he heard of a vacancy in an institution of learning at Ansonville, North Carolina, and without friends there, or special influence, or even acquaintance in the college or community, he journeyed thither and made application for the position. In 1851, while seeking pupils for this school, he heard of the proposed opening of Furman university, at Greenville, South Carolina, and that a faculty would soon be elected. He applied for the chair of mathematics and physics and was elected. That was a good day for Furman university, Greenville, and for South Carolina. He has filled the chair of mathematics ever since, and even now, in his eighty-sixth year, he still meets with his classes in astronomy, and is in close touch 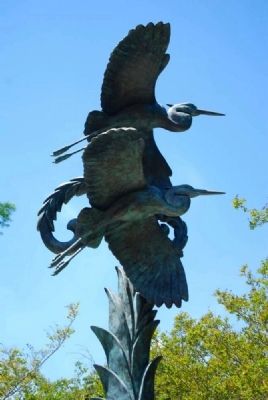 Photographed By Brian Scott, April 25, 2009
7. The Great Egrets Detail
with the classes in mathematics, though the daily routine of that work is thrown upon the shoulders of another. When he became connected with Furman there was no building, no equipment, and only a small endowment. He selected the plans and superintended the erection of the first college building; he purchased the apparatus and equipments, and has led every movement since then for the growth, improvement, enlargement of the buildings, grounds and endowment, and has largely directed in fixing the course of study and the standard of the institution. Until recently he was the treasurer and managed the funds and property, and it was very largely due to his prudence, foresight, personal sacrifices, unremitting watchfulness, and faithfulness, that the college property, funds and equipment were not lost entirely during the War between the States and in the dark days of financial stringency since. The institution has grown up around two men, Doctor Judson and Doctor James C. Furman, the first president. Doctor Judson has for many years been the dean of the faculty, and was for a year or more acting president, and he refused the presidency of the institution.

During the War between the States, Doctor Judson was president of the Greenville Female college, and for several years after the war. In this position he was instrumental in saving that institution also. He managed its affairs with great ability, saved its property, and contributed to its support during seasons of great depression and stringency. In the recent effort to increase the endowment of Furman university he contributed over twenty-six thousand dollars. He is not a rich man, but by frugality, economy and good management he accumulated some means, and he has always been generous, and a liberal contributor to benevolent, charitable and religious purposes. He is a Baptist, not a minister, but has been deacon in the First Baptist church, Greenville, for many years. He is devout, consistent in life, broad in his sympathies, and his fellow-men have the utmost confidence in his exalted character.

Doctor Judson made Greenville his home in 1851, and the upbuilding of Furman university his life work, and nothing has changed his purpose. He has given his life and his property to that institution. He has had the opportunity, time and again, of changing his home and going elsewhere. Twice he was offered the presidency of the Judson institute, Marion, Alabama, and twice that of the Richmond Female institute, Richmond, Virginia, and twice he was offered a professorship in Richmond college. After settling at Greenville he was never a place-seeker, his one aim and ambition being to make Furman university worthy of the people of the state- As a scholar and teacher he is preeminent. He is well known in the realm of letters and science. His papers have been copied into the leading scientific journals of the day. One of these, "An Investigation of the Mathematical Relations between Zero and Infinity," is noticed in full in the "Analyst" for 1881. He assisted in compiling Wentworth's Geometry, 1879, and published and assisted in revising many other text books on geometry and algebra. As a mathematician he has probably no superior in the South, and few superiors anywhere. More than that, no student ever sat under Professor Judson to learn mathematics and went away, either with or without a diploma in this school, in just the same ethical mood that he came. He was taught mathematics, he imbibed great moral ideas. His idea of life, of duty, of obligation, and manhood, underwent a change as inevitable as that brought about by the science of mathematics in the domain of the pure intellect.

Since the above sketch was written, and was revised by the editor, Professor Judson has been called away. He died at his home in Greenville on January 12,1907. It is interesting to note that about two weeks before his death the Carnegie Foundation of New York city granted him an annuity of twelve hundred dollars because of his eminence as a mathematician and in recognition of his long term of service as a teacher in one institution. (Source: Men of mark in South Carolina by James Calvin Hemphill, pg 233-236.)
— Submitted May 10, 2009, by Brian Scott of Anderson, South Carolina.
4. About Mary Camilla Judson
Charles Judson's greatest gift to the struggling college was to secure the services of his sister, Mary Camilla Judson. Born in 1828, she was educated in private schools. When the family moved to New Haven, Mary Judson was allowed to study in the Yale College Library, though it was a men's college and she could not attend classes. Committed to women's education, she moved to South Carolina and taught in several female academies and for a brief period at the Female College. After returning to the North in 1868, she came back to Greenville in 1874 and remained for the rest of her life. In 1876 Mary Judson was appointed lady principal of the Female College. Two years later Charles Judson returned to Furman and was succeeded as president by Alexander S. Townes. The son of George Townes and the grandson of William Bullein Johnson, the first principal of the Greenville Female Academy, Townes served until 1894. At his suggestion Miss Judson formed a literary society, but it was criticized both by Furman students and Baptist leaders who did not believe that women should be encouraged to speak in public. Miss Judson ignored them and informed the Thursday Afternoon Club in 1897 that she hoped the members of the society would return home after graduation and establish similar groups. The Greenville Female College, as it has come to be known, awarded the first Bachelor of Arts degree in 1893. (Source: Greenville by Archie Vernon Huff, pg 202.)
— Submitted May 10, 2009, by Brian Scott of Anderson, South Carolina.
Credits. This page was last revised on November 16, 2020. It was originally submitted on May 10, 2009, by Brian Scott of Anderson, South Carolina. This page has been viewed 1,659 times since then and 36 times this year. Photos:   1, 2, 3, 4, 5, 6, 7. submitted on May 10, 2009, by Brian Scott of Anderson, South Carolina.
Share this page.