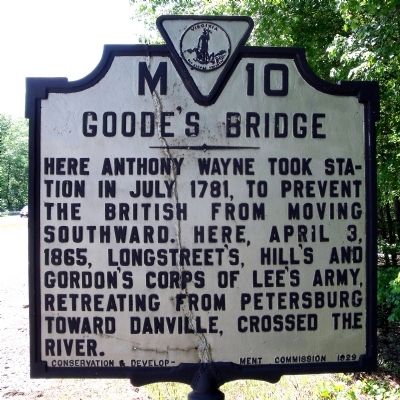 Photographed By Bernard Fisher, May 10, 2009
1. Goode's Bridge Marker
Inscription.
Goode's Bridge. . Here Anthony Wayne took station in July, 1781, to prevent the British from moving southward. Here, April 3, 1865, Longstreet's, Hill's and Gordon's corps of Lee's army, retreating from Petersburg toward Danville, crossed the river. . This historical marker was erected in 1929 by Conservation and Development Commission. It is Near Skinquarter in Chesterfield County Virginia

Topics and series. This historical marker is listed in these topic lists: Bridges & Viaducts • War, US Civil • War, US Revolutionary. In addition, it is included in the Virginia Department of Historic Resources series list. A significant historical month for this entry is April 1865.

Other nearby markers. At least 8 other markers are within 8 miles of this marker, measured as the crow flies. Amelia County / Chesterfield County (a few steps from this marker); Skinquarter Baptist Church (approx. 4.9 miles away); William Ransom Johnson 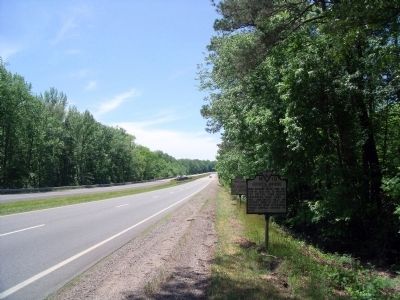