In Recognition of the
Extraordinary Leadership of

As Chair of the Board
of Trustees from 1990-1992.
Her courage and grace
enabled Furman University
to forge its own destiny.

Topics. This historical marker is listed in these topic lists: Education • Women.

She was predeceased by Buck Mickel, her husband of fifty-two years. Born in Elberton, Georgia, she was the daughter of the late Mary Helen Smith Herndon and Fred Herndon. Mrs. Mickel attended Wesleyan College in Macon, Georgia, and graduated from the University of Georgia.

Mrs. Mickel was active for many years in the Greenville community, serving as a board member and treasurer of the Junior League of Greenville, 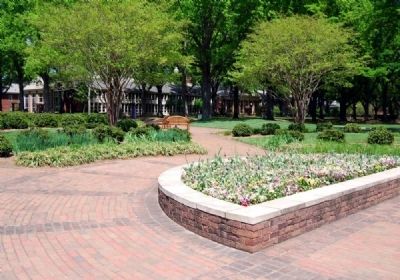 Photographed By Brian Scott, April 25, 2009
3. Minor Herndon Mickel Square
and on the boards of the Phillis Wheatley Association, the Rose Ball, the United Way, the Peace Center, the Community Foundation of Greater Greenville and the Greenville Hospital Foundation. She was a member of the First Baptist Church of Greenville.

Mrs. Mickel was a member of the Shebas Investment Club, The Debutante Club of Greenville, the McKissick Book Club and the Carolina Foothills Garden Club.

She was currently Chairman of Micco Corporation and Vice-Chairman of the Daniel-Mickel Foundation. 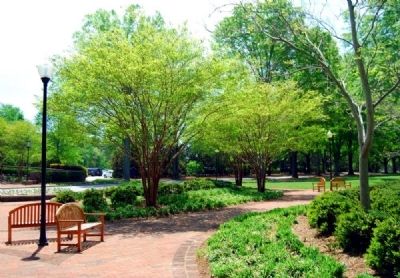 Funeral services will be conducted Sunday, Feb. 20, 2005, at 3 p.m. at First Baptist Church in Greenville. Entombment will be at Springwood Cemetery at the Mickel Mausoleum immediately following the service. The family is at 415 Crescent Avenue, and will receive friends from 3 to 7 p.m. today, Feb. 19, 2005.

In lieu of flowers, memorials may be made to the Minor Herndon Mickel Presidential Scholarship at Furman University, Office of the President, 3300 Poinsett Highway, Greenville, SC 29613; the South Carolina Governor's School for the Arts and Humanities Foundation, 15 University Street, Greenville, SC 29601, for the Minor and Buck Mickel Fund; or to the charity of one's choice. 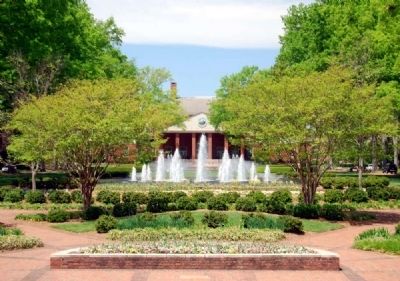