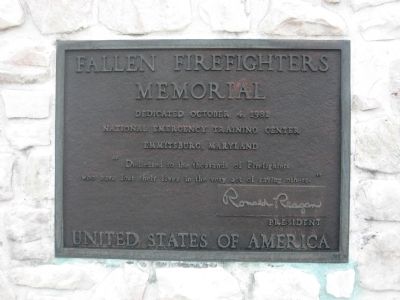 "Dedicated to the thousands of Firefighters who have lost their lives in the very act of saving others."

Topics and series. This historical marker and memorial is listed in this topic list: Charity & Public Work. In addition, it is included in the Former U.S. Presidents: #40 Ronald Reagan series list. A significant historical date for this entry is October 4, 1981.

Location. 39° 41.699′ N, 77° 19.554′ W. Marker is in Emmitsburg, Maryland, in Frederick County. Marker can be reached from Seton Avenue (Business U.S. 15) 0.6 miles south of Main Street (U.S. 140), on the left when traveling south. Monument is located on the grounds of FEMA's National Emergency Training Center. Touch for map. Marker is in this post office area: Emmitsburg MD 21727, United States of America. Touch for directions. 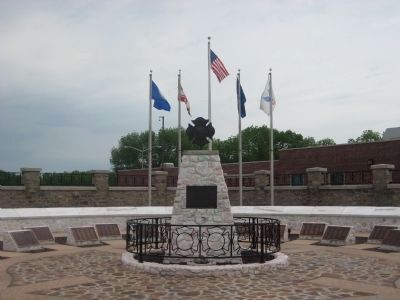 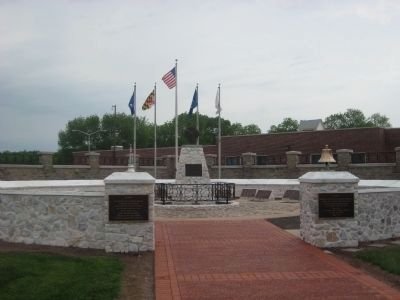 Photographed By F. Robby, May 11, 2009
3. Fallen Firefighters Memorial
The plaque on the left reads: "The National Fallen Firefighters Memorial is dedicated to the memory of all career and volunteer firefighters who have died in the line of duty and is a tribute to the current and future firefighters who carry on the noble tradition of unselfish service to their communities." The play on the right reads: "Dedicated on the 13th Day of October 1990, to the Memory of the Members of the Fire Service who have made the ultimate sacrifice and responded to their last alarm. Designated as The National Fallen Firefighters Memorial by Public Law 101-347, August 1990."
Credits. This page was last revised on January 12, 2020. It was originally submitted on May 16, 2009, by F. Robby of Baltimore, Maryland. This page has been viewed 1,508 times since then and 24 times this year. Photos:   1, 2, 3. submitted on May 16, 2009, by F. Robby of Baltimore, Maryland.
Share this page.