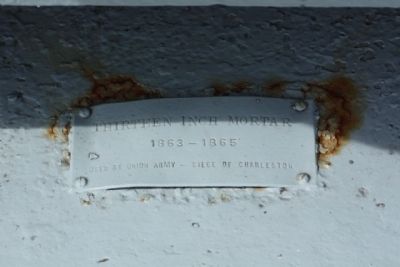 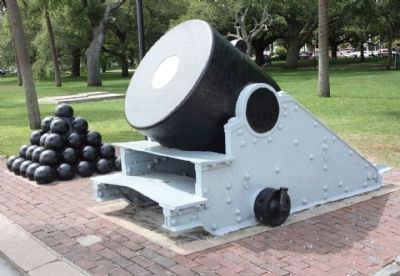 Click or scan to see
this page online
(about 300 feet away); Seven - Inch Banded Brooks Rifle (about 400 feet away). Touch for a list and map of all markers in Charleston.

Additional commentary.
1. Use of the Mortars
According to historian/reporter Warren Ripley, in his collected articles The Battery: Charlestown, South Carolina, the mortars in the battery cannot be accurately traced to wartime service around the city. The Federals did use a battery of 13-inch mortars to bombard Fort Sumter and several others on navy ships. But the registry numbers were not recorded at the time. The mortars on display arrived around 1874, and were used in the coastal defenses around Charleston until 1901. At that time, the mortars were placed on display at the battery.
— Submitted May 18, 2009, by Craig Swain of Leesburg, Virginia.
Credits. This page was last revised on January 25, 2021. It was originally submitted on May 17, 2009, by Mike Stroud of Bluffton, South Carolina. This page has been viewed 954 times since then and 24 times this year. Photos:   1, 2. submitted on May 17, 2009, by Mike Stroud of Bluffton, South Carolina. • Craig Swain was the editor who published this page.
Share this page.