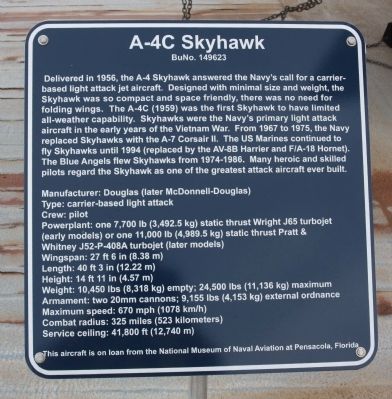 Delivered in 1956, the A-4 Skyhawk answered the Navy's call for a carrier-based light attack jet aircraft. Designed with minimal size and weight, the Skyhawk was so compact and space friendly, there was no need for folding wings. The A-4C (1959) was the first Skyhawk to have limited all-weather capability. Skyhawks were the Navy's primary light attack aircraft in the early years of the Vietnam War. From 1967 to 1975, the Navy replaced Skyhawks with the A-7 Corsair II. The US Marines continued to fly Skyhawks until 1994 (replaced by the AV-8B Harrier and F/A-18 Hornet). The Blue Angels flew Skyhawks from 1974-1986. Many heroic and skilled pilots regard the Skyhawk as one of the greatest attack aircraft ever built. 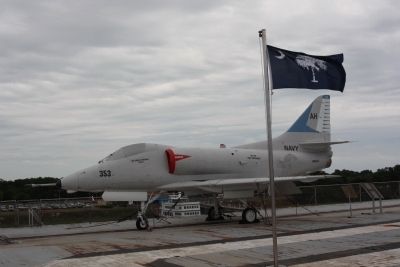 Topics. This historical marker is listed in these topic lists: Air & Space • War, Vietnam. A significant historical year for this entry is 1956. 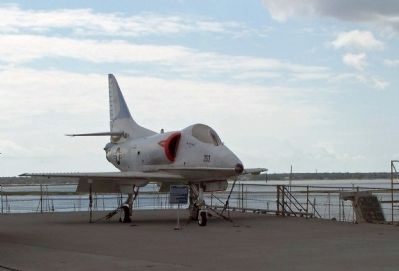 Photographed By Mike Stroud, 2013
3. A4C Skyhawk Marker
The Skyhawk remained in production until 1979, with a total of 2,960 aircraft built, including 555 two-seat trainers (Submitted on May 18, 2009, by Mike Stroud of Bluffton, South Carolina.)