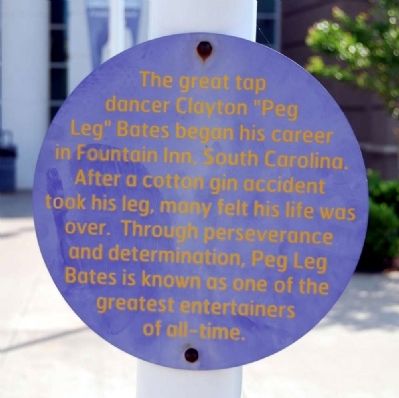 The great tap dancer Clayton "Peg Leg" Bates began his career in Fountain Inn, South Carolina. After a cotton gin accident took his leg, many felt his life was over. Through perseverance and determination, Peg Leg Bates is known as one of the greatest entertainers of all time. 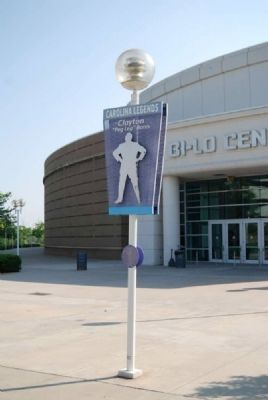 Click or scan to see
this page online
of this marker); Church Street (about 700 feet away, measured in a direct line); Here Lieth the Body of Sarah M. Crittenden (about 700 feet away); Christ Church (Episcopal) (approx. 0.2 miles away); In 1825 (approx. 0.2 miles away); Brockman Park (approx. ¼ mile away). Touch for a list and map of all markers in Greenville.

2. Performer Clayton `Peg Leg' Bates Dies At 91 In South Carolina. Clayton "Peg Leg" Bates, the world renowned performer who tap danced his way into the hearts of millions with his famous wooden peg leg, recently died at his cousin's house in Fountain Inn, SC. (Submitted on May 20, 2009, by Brian Scott of Anderson, South Carolina.)