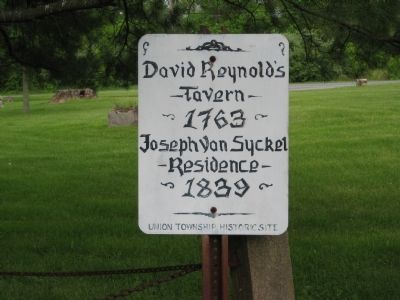 Topics. This historical marker is listed in these topic lists: Colonial Era • Industry & Commerce • Settlements & Settlers. A significant historical year for this entry is 1763.

Location. 40° 39.037′ N, 74° 58.24′ W. Marker is in Perryville, New Jersey, in Hunterdon County. Marker is on Charlestown Road (County Route 635) near Van Sickel Road, on the right when traveling north. Touch for map. Marker is in this post office area: Willingboro NJ 08046, United States of America. Touch for directions. 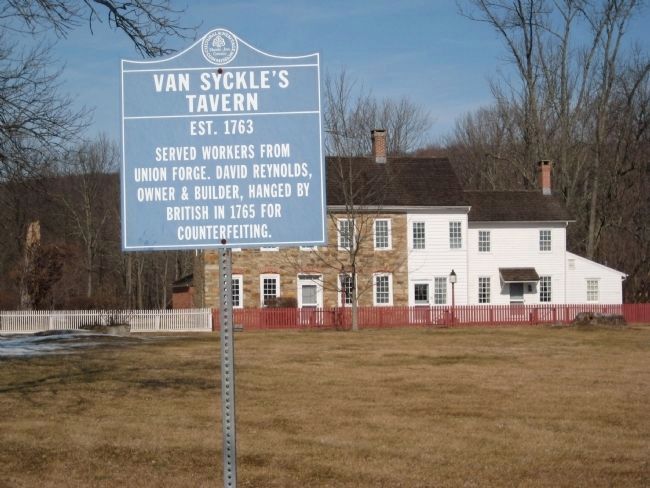 After the British Parliament passed the Stamp Act of 1765, which meant that the colonists would have to pay more taxes, the farmers in Bethlehem Township formed the "Sons of Liberty." Meetings were held at David Reynolds’ tavern. Citizens were angry and plans were made to do away with the dreaded Stamp Act.

David Reynolds was angrier than most. He came to America because he couldn’t find work in England. Now he could see that England was planning on taxing the American colonists even more.

He was so angry that he started to counterfeit money. His counterfeit press was on the third floor of his tavern, hidden in the side of the chimney where no one could see it. He had windows facing the road so that he could see anyone coming up the road.
Even with his secrecy he was found out. One day he was printing money, when he turned around to see British soldiers standing there. They had put burlap on their horses' hooves and sneaked up the back way. Reynolds never even heard them coming.
The soldiers took him off and hanged him that very day. In those days counterfeiting meant death!