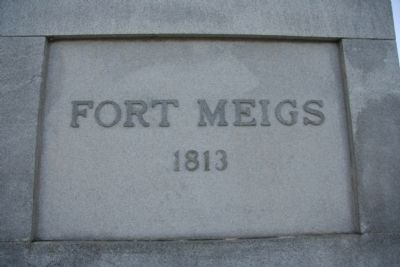 By Dale K. Benington, May 21, 2009
1. Fort Meigs Marker
Inscription.
Fort Meigs. [Marker Front]:
Fort Meigs 1813. [Marker Reverse]: In recognition of the services of the gallant men who defended their country on this spot. . This historical marker was erected in 1908 by the State of Ohio. It is in Perrysburg in Wood County Ohio

Fort Meigs
1813
[Marker Reverse]:
In recognition of the services of the gallant men who defended their country on this spot.

Topics. This historical marker is listed in these topic lists: Forts and Castles • Military • Native Americans • War of 1812. A significant historical year for this entry is 1813.

Location. 41° 33.165′ N, 83° 39.099′ W. Marker is in Perrysburg, Ohio, in Wood County. Marker is at the intersection of West Indiana Avenue (State Road 65) and Fort Meigs Road, on the right when traveling south on West Indiana Avenue. This historical marker is located inside of a reconstructed War of 1812 fort, on the high ground over looking the Maumee River, on the Perrysburg side of the river, within easy view of the Maumee-Perrysburg Bridge. Touch for map. Marker is in this post office area: Perrysburg OH 43551, United States of America. Touch for directions.

Other nearby markers. At least 8 other markers are within walking distance of this marker. General William Henry Harrison (here, next to this marker); Lieut. John McCullough & Lieut. Robert Walker (within 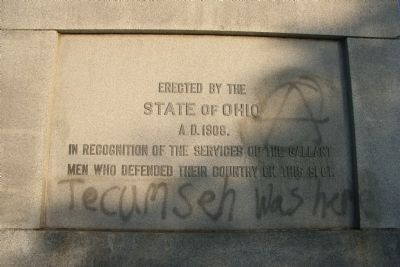 More about this marker. This historical marker is actually a very visible obelisk situated in the middle of the reconstructed Fort Meigs, on property owned and maintained by the Ohio Historical Society. In addition to this historical marker and the reconstructed fort the Ohio Historical Society also maintains a staffed museum, numerous outdoor display/interpretation panels, and frequently utilize historical interactors at this facility.

Regarding Fort Meigs. Concerning the military action that took place here at Fort Meigs during the War of 1812, Henry Howe writes in the Wood County chapter of his book entitled, Historical Collections of Ohio (copyright 1888) the following: "Gen. Harrison having repaired the fort from the damage occasioned by the siege, left for the interior of the State to organize new levies, and entrusted the command to Gen. Green Clay. The enemy returned to Malden, where the Canadian militia were disbanded. Shortly after commenced the second siege of Fort Meigs."

"On the 20th of July the boats of the enemey were discovered ascending the Miami to Fort Meigs, and the following morning a party of ten men were surprised by the Indians, and only 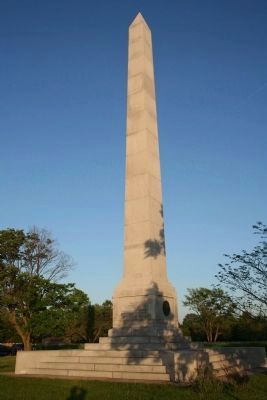 By Dale K. Benington, May 21, 2009
3. Fort Meigs Historical Memorial
three escaped death or capture. The force which the enemy had now before the post was 5,000 men under Proctor and Tecumseh, and the number of Indians was greater than any ever before assembled on any occasion during the war, while the defenders of the fort amounted to but a few hundred."

"The night of their arrival Gen. Green Clay despatched Capt. McCune, of the Ohio militia, to Gen. Harrison, at Lower Sandusky, to notify him of the presenceof the enemy. Capt. M'Cune was ordered to return and inform Gen. Clay to be particularly cautious against surprise, and that every effort would be made to relieve the Fort."

"It was Gen. Harrison's intention, should the enemy lay regular siege to the fort , to select 400 men and by an unfrequented route reach there in the night, and at any hazard break through the lines of the enemy."

"Capt. M'Cune was sent out a second time with the intelligence to Harrison that about 800 Indians had been seen from the fort, passing up the Miami, designing, it was supposed, to attack Fort Winchester at Defiance. The general, however, believed it was a ruse of the enemy to cover their design upon Upper or Lower Sandusky, or Cleveland, and kept out a reconnoitring party to watch."

"On the afternoon of the 25th Capt. M'Cune was ordered by Harrison to return to the fort, and inform Gen. Clay of his situation and intentions. He 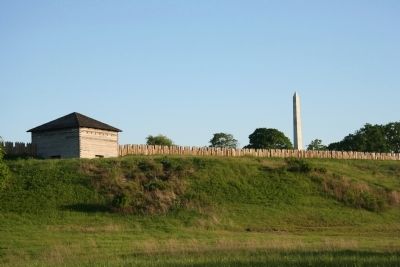 By Dale K. Benington, May 21, 2009
4. Fort Meigs
View of Fort Meigs with historical memorial marker, as seen from the Maumee River flood plain.
arrived near the fort and inform Gen. Clay of his situation and intentions. He arrived near the fort about daybreak on the following morning, having lost his way in the night, accompanied by James Doolan, a Fench Canadian...."

"The opportune arrival of M'Cune no doubt saved the fort, as the intelligence he brought was the means of preserving them from an ingeniously devised stratagem of Tecumseh, which was put into execution that day, and which we here relate."

Towards evening the British infantry were secreted in the ravine below the fort, and the cavalry in the woods above, while the Indians were stationed in the forest, on the Sandusky road, not far from the fort. About an hour before dark they commenced a sham battle among themselves, to deceive the Americans into the belief that a battle was going on between them and a reinforcement for the fort, in the hopes of enticing the garrison to the aid of their comrades. It was managed with so much skill that the garrison instantly flew to arms, impressed by the Indian yells, intermingled with the roar of musketry, that a severe battle was being fought. The officers even of the highest grades were of that opinion, and some of them insisted upon being suffered to march out to the rescue. Gen. Clay, although unable to account for the firing, could not believe that the general had so soon altered his intention, as expressed 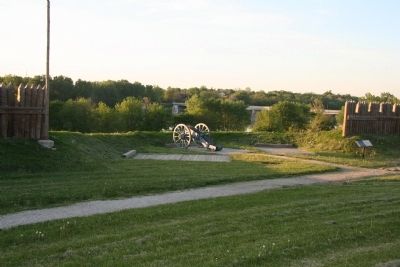 By Dale K. Benington, May 21, 2009
5. Fort Meigs
View of portion of Fort Meigs fortifications that are facing the river side of the fort.
to Capt. M'Cune, not to send or come with any troops to Fort Meigs, until there should appear further necessity for it. This intelligence in a great measure satisfied the officers, but not the men, who were extremely indignant at being prevented from going to share the dangers of their commander-in-chief and brother soldiers, and perhaps had it not been for the interposition of a shower of rain, which soon put an end to the battle, the general might have been persuaded to march out, when a terrible massacre of the troops would have ensued."

"The enemy remained around the fort but one day after this, and on the 28th embarked with their stores and proceeded down the lake, and a few days after met with a severe repulse in their attempt to storm Fort Stephenson."

"We are informed by a volunteer aid of Gen. Clay, who was in the fort at the second siege, that preparations were made to fire the magazine in case the enemy succeeded in an attempt to storm the fort, and thus involve all, friend and foe, in one common fate. This terrible alternative was deemed better than to perish under the tomahawks and scalping knives of the savages."

Also see . . .
1. Visiting Fort Meigs . At the web site sponsored by "Touring Ohio" is a web-page that provides information on visiting Ohio's reconstructed Fort Meigs (Submitted on May 23, 2009, by Dale K. Benington of Toledo, Ohio.)