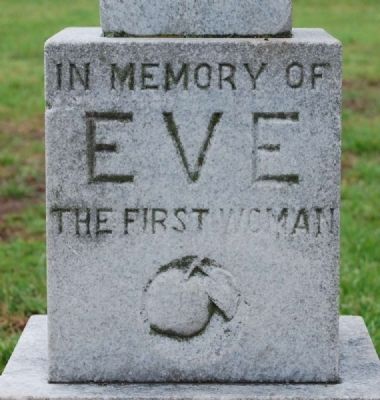 Photographed By Brian Scott, May 17, 2009
1. Eve Marker
Inscription.
Eve. .
In Memory of Eve The First Woman. . This historical marker was erected in 1925 by Robert Quillen. It is in Fountain Inn in Greenville County South Carolina

In Memory of
Eve
The First Woman

Topics. This historical marker is listed in these topic lists: Churches & Religion • Women. 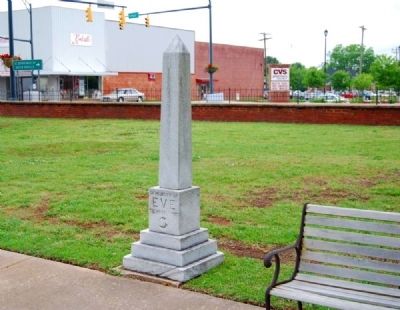 More about this marker. The small obelisk was erected by noted humorist and cartoonist Robert Quillen. The grounds shown were once Quillen's garden. Fountain Inn City Hall (not shown) sits on the site of Quillen's home. In 2009, Quillen was inducted into the South Carolina Press Association Hall of Fame.

Also see . . .  Robert Quillen. Verni Robert Quillen (March 25, 1887 - December 9, 1948) was an American journalist and humorist who for more than a quarter century was "one of the leading purveyors of village nostalgia" from his home in Fountain Inn, South Carolina. (Submitted on May 24, 2009, by Brian Scott of Anderson, South Carolina.)

Additional commentary.
1. Quotes from Robert Quillen
"Acting is not being emotional, but being able to express emotion."

"As we grow older, our bodies get shorter and our anecdotes longer."

"Great art is never produced for its own sake. It is too difficult to be worth the effort."

"If there be anything that can be called genius, it consists chiefly in ability to give that attention to a subject which keeps it steadily in the 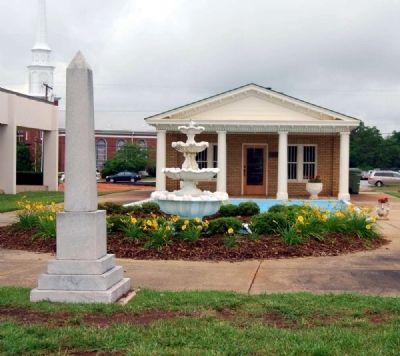 Photographed By Brian Scott, May 17, 2009
3. Eve Marker -
Robert Quillen Museum in Background
mind, till we have surveyed it accurately on all sides."

"If we wish to make a new world we have the material ready. The first one, too, was made out of chaos."

"There are glimpses of heaven to us in every act, or thought, or word, that raises us above ourselves." (Source: http://www.brainyquote.com/quotes/authors/r/robert_quillen.html.)
— Submitted May 24, 2009, by Brian Scott of Anderson, South Carolina.
2. More Quotes from Robert Quillen
"Sunday is still a day of rest, if you don't count the coroner."

"Another objection to murder is that it shows such poor discrimination."

"If he no longer yearns to go back and impress the old home town, he has arrived."

"The police dog isn't the only one that came from Germany to America. There's the hot dog."

"One difference between modern dances and wrestling is that wrestlers use a mat." (Source: The Voice of Small-Town America: The Selected Writings of Robert Quillen, 1920-948 by Robert Quillen, edited by John Hammond Moore (2007) pg 8.)
— Submitted May 24, 2009, by Brian Scott of Anderson, South Carolina. 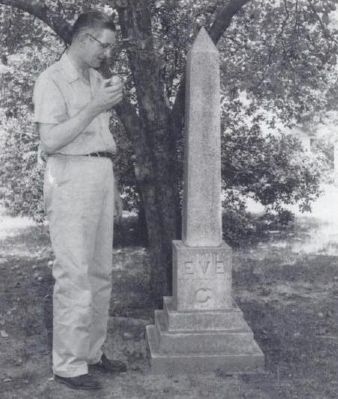 South Carolinian Library, University of South Carolina, circa 1925
4. Robert Quillen and the Eve Marker
3. "Concerning Eve" by Robert Quillen, December 17, 1925
I never get to have any fun. All my little jokes go awry. Good intentions serve only to get me into trouble.

There's the matter of Eve. Eve was a distant relative of mine, on my mother's side. The family has always been proud of her. She was the first lady of the land, and the reigning beauty of her time.

So far as I know, the family never has done anything to honor her. A few weeks ago I determined to make amends for this unpardonable neglect, and commissioned Mr. Gillespie of Greenville to fashion a monument of marble and to carve upon it this legend:


In Memory of
Eve
The First Woman
Beneath the inscription is a nicely carved apple, with a twig and one leaf.

The marble is a delicate shaft or obelisk, similar in design to Cleopatra's Needle, and I am sure its simple dignity would appeal to Eve's taste, for she was not addicted to useless ornamentation.

Last week the obelisk was erected in my yard, and I had the complacency feeling of one who has done his duty well.

But one never knows. My neighbors stated at the marble with incredulous horror; they prophesied plagues upon me; they accused me of an unbecoming levity toward things that are sacred; they glared at the marble by day and scurried by with many a backward glance at night.