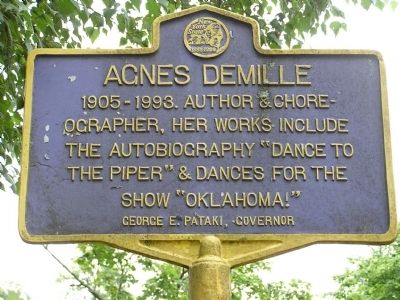 Photographed By Tara Buckstad-Russo, July 20, 2012
1. Agnes DeMille Marker
Inscription.
Agnes DeMille. Author and Choreographer. Her works include the autobiography "Dance to the Piper" and dances for the show "Oklahoma!" . This historical marker was erected by New York State-Governor George E. Pataki. It is in Forestburgh in Sullivan County New York

Author & Choreographer. Her works include the autobiography "Dance to the Piper" & dances for the show "Oklahoma!"

Other nearby markers. At least 8 other markers are within 4 miles of this marker, measured as the crow flies. Saint Thomas Aquinas Roman Catholic Church (here, next to this marker); Site of Methodist Church (a few steps from this marker); Here Stood one of the Stage Coach Stations (about 700 feet away, measured in a direct line); Log Cabin (approx. 0.7 miles away); Town Hall Site (approx. 1.6 miles away); Ruddick Pond (approx. 2.3 miles away); Moore's Turning Mill and Saw Mill (approx. 3 miles away); Saint Josephs (approx. 3.4 miles away). Touch for a list and map of all markers in Forestburgh.
Credits. This page was last revised on March 17, 2022. It was originally submitted on July 24, 2012, by Tara Buckstad-Russo of Forestburgh, New York. This page has been viewed 408 times since then and 22 times this year. Last updated on March 14, 2022, by Carl Gordon Moore Jr. of North East, Maryland. Photo   1. submitted on July 24, 2012, by Tara Buckstad-Russo of Forestburgh, New York. • J. Makali Bruton was the editor who published this page.
Share this page.