Heritage Travelers over the Years 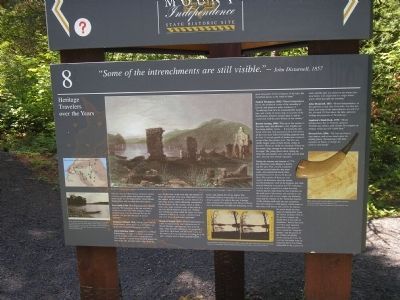 “Some of the intrenchments are still visible.” – John Disturnell, 1857

After the American Revolution, numerous visitors curious to see the places that figured so prominently in the war for independence visited Mount Independence and recorded their observations.

Peter Sally, 1784: “Fort Independence is directly opposite. The Americans in the late war built a bridge across the lake which separates Mount Independence from Ticonderoga. We saw its remains. We also saw the ruins of several batteries.”

Benjamin Silliman, 1819: “On the right is Mount Independence, where there was a formidable fort at the time of General Burgoyne’s invasion . . . ”

Alden Partridge, 1820: “ . . . crossed over to Mount Independence, in order to examine its position, and the remains of the works which had been there erected . . . A breast-work extended around the base of the hill, near the water’s edge from the east, on the north, to the west side, the remains of which are distinctly seen. About half way to the summit, on the north side, are the remains of 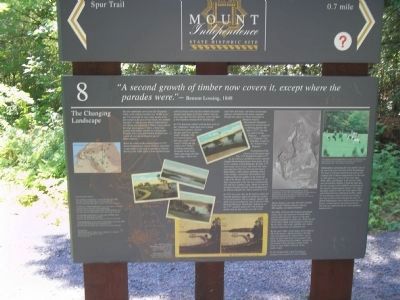 Click or scan to see
this page online
a half-moon battery, which effectually commanded the lines below. On the summit, which is table land, was a large stockade work, in the form of a star fort, which enclosed a large area. Nothing now remains to denote either the figure or former existence of this work, except a shallow trench and a few decayed and broken palisades.”

Theodore Dwight, 1831: “Mount Independence is a hill of comparatively small elevation east of Mount Defiance, and separated from it by the lake, which has here reduced its size to that of a small river. On a bank, just above the water, are the remains of a zig-zag battery for about 40 or 50 guns, running across a little cornfield behind a house, and making six angles. The Horseshoe Battery is traceable on an elevation about a quarter of a mile in the rear. A bridge once connected Ticonderoga with Mount Defiance (sic), the buttresses of which are remaining, to the great annoyance of the navigators of the lake; the steamboat passes to the south of them.”

Zadock Thompson, 1842: “Mount Independence lies in the northwest corner of the township of Orwell, and about two miles southeast of Ticonderoga Fort. It is an inconsiderable mountain, and worthy of notice only on account of the fortifications formerly erected upon it, and its connection with the early history of our country.” 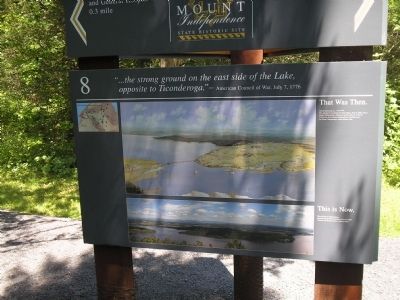 Photographed By Bill Coughlin, July 12, 2008
3. That Was Then, This is Now Marker (Marker 3)
1848: “The top of the summit is flat table-land, and afforded a very eligible site for strong military works . . . It was heavily timbered when they took possession of it, but almost all the trees were felled for building purposes and for fuel. A second growth of timber now covers it, except where the parades were. The trees are chiefly maple, some of them twenty inches in diameter. There are about two hundred of them on the mount, large enough for the extraction of sap for sugar. The young shoots never sprang up where the old parades were, and they present bald spots, bearing only stinted vegetation.

During the summer and autumn of 1776 the Americans were diligent in fortifying this spot. They erected a picketed fort and several batteries, dug many wells, and constructed nearly three hundred houses for the use of the soldiers. The remains of these are scattered in all directions upon the mount; and the fortification walls of the hospital, just commenced when the evacuation in 1777 took place, are now nearly as perfect as when first laid. Narrow ditches, indicating the line of pickets on the north part of the mount, and running in various directions and at every angle, are distinctly seen; and the remains of the “horseshoe battery,” on the extreme north end, are very prominent. Near this battery is a flint quarry, which seems to have been well known 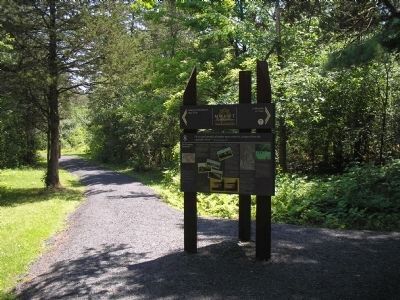 Photographed By Bill Coughlin, July 12, 2008
4. Marker on Mount Independence
The marker is found along the 1.6 mile Baldwin Trail in Mount Independence State Historic Site. This is a three sided marker at a junction on the trail.
and used by the Indians for arrow-heads in every stage of manufacture, from the almost unshapen flint to the perfect weapon, are found there, I was told in abundance. Toward the close of 1776 a fatal epidemic prevailed in the garrison there called the “camp distemper,” and the graves of the victims are thickly strewn among the trees. At one time the deaths were so numerous that it was found impossible to dig a grave for each, and the spot was shown to me where fourteen bodies were deposited in a single broad grave, about daylight one morning.”

John Disturnell, 1857: “Mount Independence, on the opposite or east side of the lake, was also fortified, and some of the intrenchments are still visible, elevated 110 feet above the lake, and overlooking the peninsula of Ticonderoga.”

Appleton’s Hand-Book, 1870: “Mount Independence lies in Vermont, opposite Ticonderoga, about a mile distant. The remains of military works are still visible here.”

Howard Pyle, 1896: “The lake just here is very narrow, and as one stands upon the sloping glacis [Ticonderoga] (the feeding-place of flocks of sheep) the scene is very lovely.”

“A second growth of timber now covers it, except where the parades were.” – Benson 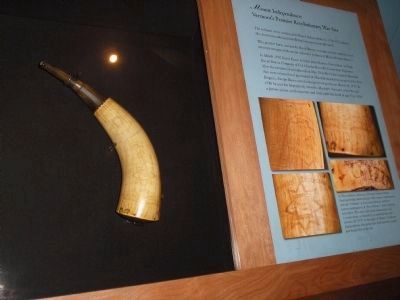 Photographed By Bill Coughlin, July 12, 2008
5. Powder Horn of David Rusco
This is the powder horn pictured on marker 1, which contains images of the Star Fort, Shore battery and Horseshoe battery (or citadel) on Mount Independence. It is on display in the museum.
Lossing, 1848

The first inhabitants entered into the Champlain Valley as the glaciers receded over 10,000 years ago. For thousands of years they lived and worked in the area of East Creek, the northern boundary of what became Mount Independence. The Mount was important to Native Americans for the large outcroppings of chert, a black fine-grained stone highly adaptable for making tools. Roughly hewn tools and finished products were traded all over the northern part of North America.

When the American Revolution began in 1775, Mount Independence looked relatively undisturbed to inhabitants of the area. A painting by Thomas Harris in the 1700s shows a dense hardwood and forest with only the northern end partly cleared, most likely by French soldiers who cut down trees here for their defenses across the lake at Fort Carillon (renamed Fort Ticonderoga).

In 1776 American soldiers arrived here in the “wilderness” where they were to build fortifications against a British advance and to set up their camps. Atop this 350-acre bedrock peninsula was a layer of underbrush and old hardwood trees. Snakes, including rattlesnakes, were found on the rocky slopes and among the stone ledges. There were many deer and ducks, and flocks of passenger pigeons, a bountiful food source, migrated through the region. . .

Construction of the extensive fortifications from July 1776 through September 1777 by the American and British armies radically changed Mount Independence from nearly all forested to a cleared, altered landscape. By June 1777 only twenty acres of trees still stood. The older trees had been felled for firewood and used to build shelters, other military buildings, breastworks, bridges, and fascines. Wood parties also sought firewood supplies in the north and south of the Mount. The feet of thousands of soldiers concentrated in this one site, compacted the dirt and led to standing water, which was ripe for mosquito breeding grounds. Otter disappeared as this flatland changed and the soldiers hunted for food.

In 1789, ten years after the Revolution ended, the Vermont legislature approved setting the remains of east side of Mount Independence. . .

View of Mount Independence from the top of Mount Defiance, Summer 2006. Courtesy of Christopher Elebert, photographer.

Topics. This historical marker is listed in these topic lists: Colonial Era • War, US Revolutionary. A significant historical month for this entry is June 1777.