at The Shrine of Saint Joseph 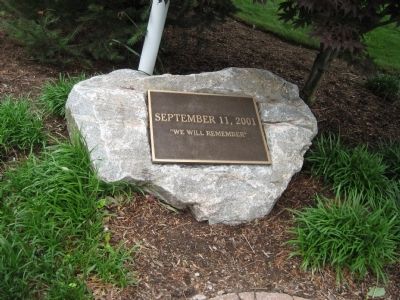 By Alan Edelson, June 3, 2009
1. Tower of Remembrance Marker
Inscription.
Tower of Remembrance. at The Shrine of Saint Joseph.
September 11, 2001 "We Will Remember". . This historical marker was erected by Missionary Servants of the Most Holy Trinity. It is Near Stirling in Morris County New Jersey

Erected by Missionary Servants of the Most Holy Trinity.

Topics. This historical marker is listed in these topic lists: 9/11 Attacks • Heroes. A significant historical date for this entry is September 11, 2001.

Location. 40° 40.913′ N, 74° 29.397′ W. Marker is near Stirling, New Jersey, in Morris County. Marker can be reached from Long Hill Road near Central Avenue, on the right when traveling west. The bell tower is located on the grounds of the Shrine of Saint Joseph. Touch for map. Marker is at or near this postal address: 1050 Long Hill Road, Stirling NJ 07980, United States of America. Touch for directions.

Regarding Tower of Remembrance. 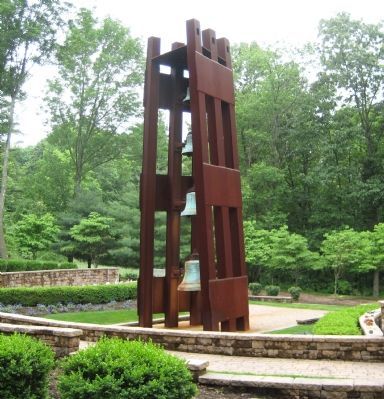 Click or scan to see
this page online
From leaflet available at the site:

"Welcome to this most sacred site! A place of healing, prayer, and peace honoring the innocent victims who died on September 11, 2001. This memorial combines steel from the North Tower Building of the World Trade Center and bells from the Missionary Servants of the Most Holy Trinity's Seminary in Monroe, Virginia. The structure is an extension of God's magnificent natural beauty, a place of great reverence and sacredness.

The bells were originally blessed and installed in 1960 at the Seminary and rang there until 1973. They have been silent since then. Bells have always been significant in calling people. These bells will ring out calling all people to pray - and work faithfully - for world peace, so that these victims will not have died in vain. This Tower of Remembrance - emerging from the rubble of violence - will remind us that in God there is hope; that as we remember, we heal. The name of each innocent victim who died at the World Trade Center, the Pentagon, and in the field in Pennsylvania is inscribed on the memorial walls.

The Tower of Remembrance is a place where everyone can reflect on the sacredness of lives remembered. A bell tolls forty-six minutes after each hour starting at 8:46 am and ending 8:46 pm. It tolls four times in remembrance of the lives lost at the North tower, at the South tower, at the 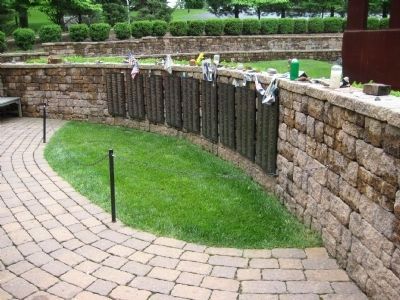 By Alan Edelson, June 3, 2009
3. First group of plaques with victim's names
Pentagon, and in the field in Pennsylvania." 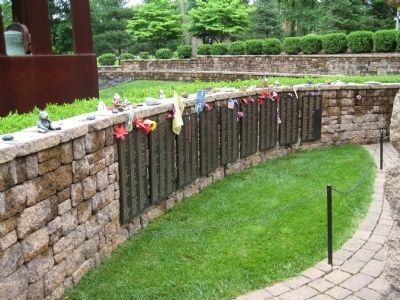 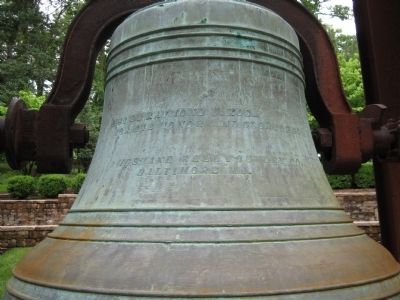 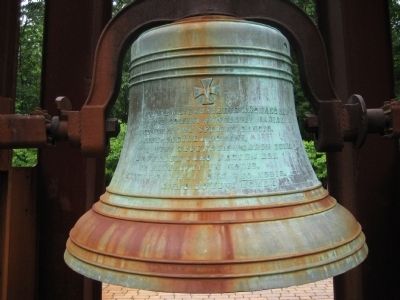 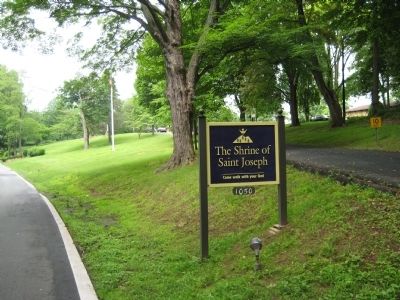