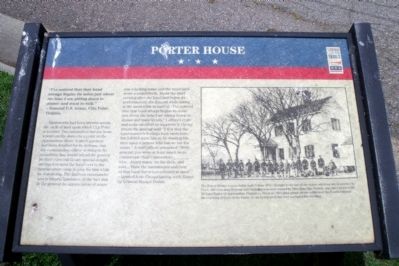 “I’ve noticed that that band always begins its noise just about the time I am sitting down to dinner and want to talk.” – General U.S. Grant, City Point, Virginia

Earthworks had been thrown across the neck of land upon which City Point is located. This intrenched line ran from a point on the James River to a point on the Appomattox River. A small garrison had been detailed for its defense, and the commanding officer wishing to do something that would afford the general-in-chief (General Grant) special delight, arranged to send the band over to headquarters camp to play for him while he was dining. The garrison commander was in blissful ignorance of the fact that to the general the appreciation of music was a lacking sense and the musician’s score a sealed book. About the third evening after the band had begun its performances, the general while sitting at the mess-table remarked, “I’ve noticed that that band always begins its noise just about the time I am sitting down to dinner and want to talk.” I offered to go and make an effort to suppress it. On my return the general said: “I fear 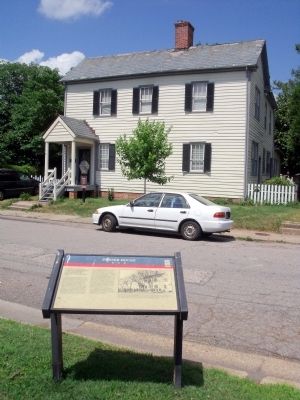 Click or scan to see
this page online
that the band-master’s feelings have been hurt, but I didn’t want him to be wasting his time upon a person who has no ear for music.” A staff-officer remarked: “Well, general, you were at least much more considerate than Commodore_________, who…heard music on the deck, and said…”Have the instruments and men of that band thrown overboard at once!” – Quoted from Campaigning with Grant by General Horace Porter.

Topics and series. This historical marker is listed in this topic list: War, US Civil. In addition, it is included in the Former U.S. Presidents: #18 Ulysses S. Grant, and the Virginia Civil War Trails series lists. 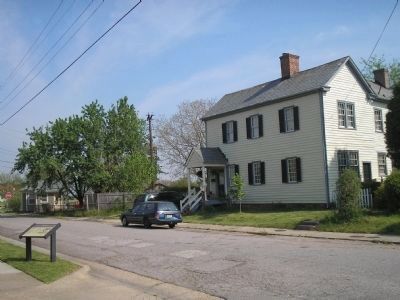 Photographed By Bill Coughlin, April 25, 2007
3. Marker at the Porter House
(within shouting distance of this marker); General Grant's Headquarters (within shouting distance of this marker); City Point's Rails And Waterways (about 300 feet away, measured in a direct line); General Grant's Headquarters at City Point (about 400 feet away). Touch for a list and map of all markers in Hopewell.

More about this marker. On the right is a photo of the Porter House with the caption, "The Porter House was probably built before 1811. Thought to be one of the oldest surviving structures in City Point, the two-story Federal style building was once owned by Miss Mary Van Duesen, who later married Mr. Richard Eppes of Appomattox Plantation. Since an 1864 photograph shows soldiers of the Fourth Infantry Band posing in front of the house, it can be inferred that they occupied the dwelling."
Credits. This page was last revised on August 2, 2020. It was originally submitted on June 4, 2009, by Bernard Fisher of Richmond, Virginia. This page has been viewed 1,140 times since then and 32 times this year. Photos:   1, 2. submitted on June 4, 2009, by Bernard Fisher of Richmond, Virginia.   3. submitted on June 4, 2009, by Bill Coughlin of Woodland Park, New Jersey.
Share this page.