The Battle of the Bulge 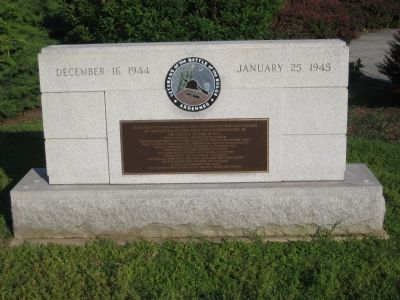 Veterans of the Battle of the Bulge, Ardennes

This enormous and intensive battle, the greatest battle ever engaged in by the United States Army, was fought in Belgium and Luxembourg during World War II from 16 December 1944 through 25 January 1945, under most adverse winter weather. The Maryland/District of Columbia Chapter, Veterans of the Battle of the Bulge, assembled here on 30 May 1999, dedicate this monument to remember the triumph of courage, honor our fallen comrades and commemorate this ever famous American victory.

Topics. This historical marker is listed in this topic list: War, World II. A significant historical month for this entry is January 1992.

Location. 39° 5.945′ N, 76° 44.615′ W. Marker is in Fort Meade, Maryland, in Anne Arundel County. Marker can be reached from Leonard Wood Avenue, 0 miles south of Bundy Street, on the left when traveling south. Marker is on the grounds of the Fort George G. Meade Museum. 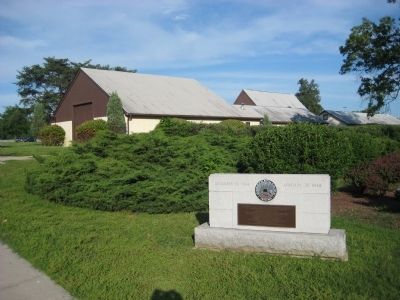 Photographed By F. Robby, June 7, 2008
2. The Battle of the Bulge Marker
Museum building is in the background.

Click or scan to see
this page online
Touch for map. Marker is in this post office area: Fort George G Meade MD 20755, United States of America. Touch for directions.