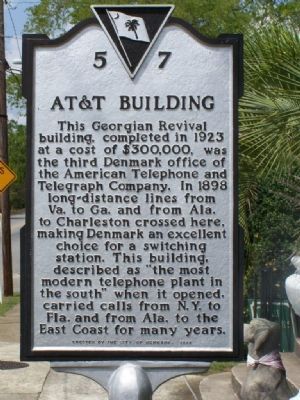 Photographed By Michael Stroud, circa July 2007
1. AT&T Building Marker
Inscription.
AT&T Building. . This Georgian Revival building, completed in 1923, at the cost of $300,000, was the third Denmark office of the American Telephone and Telegraph Company. In 1898, long-distance lines from Virginia to Georgia, and from Alabama to Charleston crossed here, making Denmark an excellent choice for a switching station. This building, described as “the most modern telephone plant in the south” when it opened, carried calls from New York to Florida, and Alabama to the East Coast, for many years. . This historical marker was erected in 1999 by City of Denmark. It is in Denmark in Bamberg County South Carolina

This Georgian Revival building, completed in 1923, at the cost of $300,000, was the third Denmark office of the American Telephone and Telegraph Company. In 1898, long-distance lines from Virginia to Georgia, and from Alabama to Charleston crossed here, making Denmark an excellent choice for a switching station. This building, described as “the most modern telephone plant in the south” when it opened, carried calls from New York to Florida, and Alabama to the East Coast, for many years.

Topics and series. This historical marker is listed in these topic lists: Architecture • Communications • Industry & Commerce. In addition, it is included in the National Historic Landmarks series list. A significant historical year for this entry is 1923. 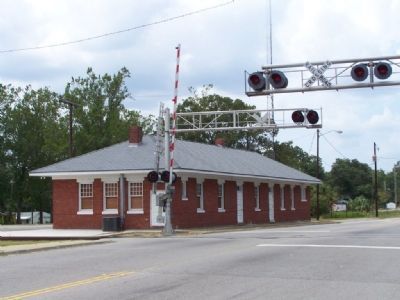 Regarding AT&T Building. During WWII, the AT&T building, and nearby train depot were guarded by soldiers from Fort Stewart, Georgia. This building was an important link in the nation’s communications, and was considered a prime target for sabotage. This historic building is now a home to an antiques store on Carolina Highway, US 321. Kind of fitting for the times. 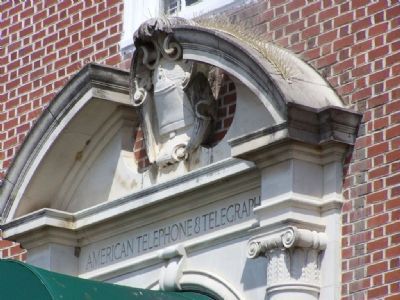 Also see . . .
1. History of Network Switching. “For many years, all long distance calls began with a call to an operator sitting at a toll (long-distance) switchboard. Until the 1920s, that operator wrote down the calling information provided by the customer, and then told the customer that he or she would be called back once the party was on the line. The operator then passed the information to another operator, who would look up the route that the call should take, and then build up the circuit one link at a time by connecting to operators at switchboards along the route. A typical call took seven minutes to set up. Once operators established a circuit, it was dedicated to that conversation until the end of the call.” This building was built when AT&T began improving the handling of long distance calls. (Submitted on December 18, 2007, by J. J. Prats of Powell, Ohio.) 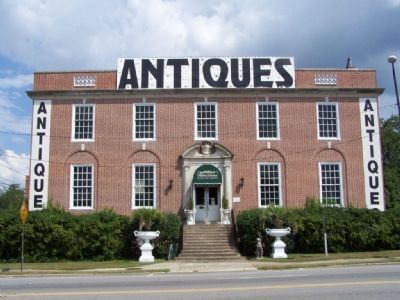 Photographed By Michael Stroud, July 2007
4. The current look
architecture in the Georgian Revival style, but also for the role the American Telephone & Telegraph Company played in the development of the telephone and communications industry in early twentieth century lowcountry South Carolina. (Submitted on September 18, 2008, by Brian Scott of Anderson, South Carolina.)

Additional commentary.
1. Long Distance Calls Were Expensive in 1927
The cost of long distance calls that were switched through this building in the 1920s and ’30s varied by distance and could be as high as $20 or more for the first three minutes. Back then the U.S. average monthly salary was just a little over $100. The common man did not make many long distance calls.
— Submitted December 18, 2007, by J. J. Prats of Powell, Ohio.
2. Radio and then Television Broadcasts were Transmitted Through This Building
A few years after this building was first built, the National Broadcasting Company (NBC) had just been formed and used AT&T Long Lines to transmit its programs to local radio stations, creating one of the first radio networks. Columbia Broadcasting System (CBS) followed in 1928. Begining in the 1950s, network television programs also used AT&T Long Lines to reach local broadcast stations until satellite distribution took over late in the 20th century.
— Submitted December 18, 2007, by J. J. Prats of Powell, Ohio.
3. This Building Was Once Full of Western Electric Equipment
AT&T and the Bell System used its leasing arrangements for telephones and telephone equipment made by its subsidiary, Western Electric to increase its control over telephone manufacturing in the United States and Canada. Western Electric-made phones were owned not by individual customers, but by local Bell System telephone companies — all of which were in turn owned by AT&T, which also owned Western Electric itself. Instead, each phone was leased from AT&T on a monthly basis by customers, who generally paid for their phone and its connection many times over in cumulative lease fees. This monopoly made millions of extra dollars for AT&T and Western Electric, which had the secondary effect of greatly limiting phone choices and styles. Many phones made by Western Electric carried the following disclaimer permanently molded into their housings: “BELL SYSTEM PROPERTY—NOT FOR SALE.” Telephones also labeled with a sticker marking the Bell Operating Company that owned the telephone. To increase revenues, the Bell System sometimes remodelled older-design returned phones with new housings, then leased them for use in new installations. The longevity of Western Electric phone models and the limited number of new designs was a direct result of AT&T and Bell System control of new phone sales in a monopolistic system.