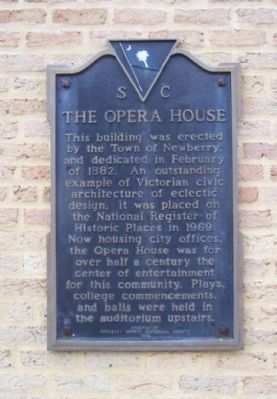 Photographed By Mike Stroud, September 2008
1. The Opera House Marker
Inscription.
The Opera House. . , This building was erected by the Town of Newberry, and dedicated in February of 1882. An outstanding example of Victorian civic architecture of eclectic design, it was placed on the National Register of Historic Places in 1969. Now housing city offices, the Opera House was for over half a century the center of entertainment for this community. Plays, college commencements, and balls were held in the auditorium upstairs. . This historical marker was erected in 1970 by Newberry Historical Society. It is in Newberry in Newberry County South Carolina

This building was erected by the Town of Newberry, and dedicated in February of 1882. An outstanding example of Victorian civic architecture of eclectic design, it was placed on the National Register of Historic Places in 1969. Now housing city offices, the Opera House was for over half a century the center of entertainment for this community. Plays, college commencements, and balls were held in the auditorium upstairs.

Topics. This historical marker is listed in these topic lists: Entertainment • Notable Buildings. A significant historical month for this entry is February 1882. 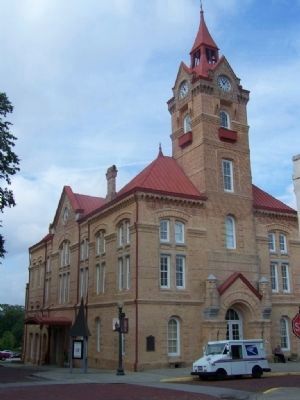 Photographed By Mike Stroud, 2008
2. The Opera House and Marker

More about this marker. The Newberry Opera House, located in Newberry, South Carolina is located on I-26 about midway between Spartanburg and Columbia. In addition to popular artists, the theatre is the location for performances by the South Carolina Opera Company and the Asheville Lyric Opera.

Regarding The Opera House. Newberry Opera House was added to the National Register of Historical Places in 1969 (Building - #69000171). It was designed by Gottfried L. Normann. 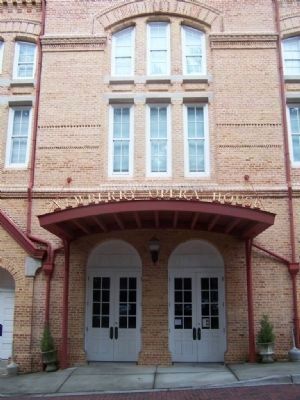 Additional commentary.
1. Newberry Opera House
The Opera House building is Gothic in design, with a tall steeple and a wide gable on the front side. The parcade is sloping; the balcony wide and also sloping.

After examining the building for the Newberry County Historical Society, Dr. Harold N. Cooledge, alumni professor of architecture at Clemson University, thinks that the community building 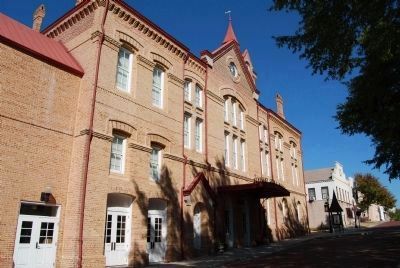 Photographed By Brian Scott, November 1, 2008
4. Newberry Opera House
Boyce (South) Street Elevation
was “in all likelihood, ‘designed’ out of a pattern book, and shows the influence of the Philadelphia architect, Frank Furness.” “This is unusual,” says Dr. Cooledge, “as Furness was popular during later years of the reconstruction when little monumental architecture was undertaken in the South.” The entrance, shape and construction of window openings, and the rich, heavy, brick ornamentation is very reminiscent of his style.

“The original arrangement of interior spaces and the accumulation of such a wide range of municipal functions under one roof is not surprising (examples of this tendency can be found from 1840-1900): what is surprising is the find condition of the building and the degree to which its original form and functions have been preserved. The condition of the ‘Opera House’ proper is most unusual; I know of only one or two (and those had to be heavily restored) which can compare with it.”

Located on Newberry’s central square, the old building was the hub of cultural and civic activities for many years. Its bricks were handmade in Newberry.

Restoration is scheduled to begin immediately under the auspices of the Newberry County Historical Society. The project has strong local support.

Significance
Located on a lot where John Leavell, among others, operated a tavern in the town’s 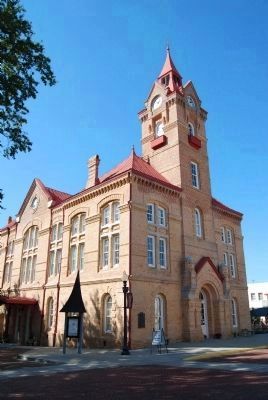 Photographed By Brian Scott, November 1, 2008
5. Newberry Opera House
Front (East) Elevation
earlier years, the Newberry Opera House became a popular cultural center from the time of its dedicated in 1882. The lot was purchased from Mr. Leavell in 1871.

Here were presented the stage dramas, operas and operettas, minstrel shows, musical comedies and similar attractions which toured the country in this era and are remembered as major features of the town’s cultural and social life. Prior to the erection of the Opera House, the local Thespian Club had presented shows (1876-1881) in second-story rooms of a building nearby. With the advent of movies, and the building of larger auditoriums in the city, the Newberry Opera House was used exclusively as a movie theater. The building currently houses city government, the development board and the local Civil Defense group.

According to Dr. Cooledge, the building “is a very good example of eclectic design from the last quarter of the 19th century…I consider Newberry most fortunate to possess sich a building in such a location. Proper conservation and restoration would give the city a facility of great value and usefulness, while preserving a significant example of Newberry’s material history.” (Source: National Register nomination form.)
— Submitted August 9, 2009, by Brian Scott of Anderson, South Carolina. 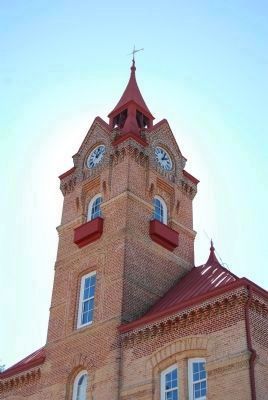 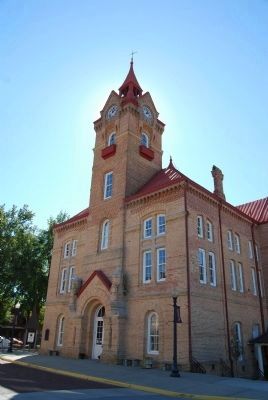