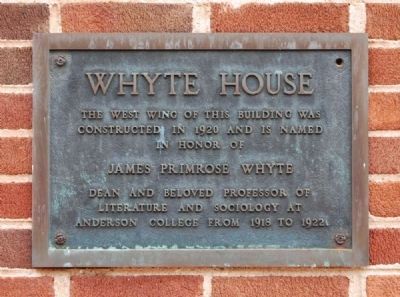 By Brian Scott, May 26, 2009
1. Whyte House Marker
Inscription.
Vandiver Hall. Whyte House, also, White Building.
Whyte House The west wing of this building was constructed in 1920 and is named in honor of James Primrose Whyte Dean and beloved Professor of Literature and Sociology at Anderson College from 1918 to 1922. John E. White Building Constructed in 1960 This building is named in honor of Dr. John Ellington White Orator, Scholar and Dynamic President of Anderson College from 1916 to 1927.. . This historical marker is in Anderson in Anderson County South Carolina

Whyte House
The west wing of this building was
constructed in 1920 and is named
in honor of
James Primrose Whyte
Dean and beloved Professor of
Literature and Sociology at
Anderson College from 1918 to 1922.

John E. White Building
Constructed in 1960
This building is named in honor of
Dr. John Ellington White
Orator, Scholar and Dynamic President of
Anderson College from 1916 to 1927.

Location. 34° 30.8′ N, 82° 38.267′ W. Marker is in Anderson, South Carolina, in Anderson County. Marker can be reached from Boulevard. Marker is located on the south side of the building, on the campus of Anderson University. Touch for map. Marker is at or near this postal address: 316 Boulevard, Greenville SC 29601, United States of America. Touch for directions. 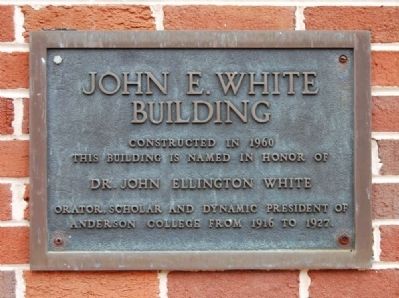 3. Anderson College Historic District. In the spring of 1910 the Anderson Chamber of Commerce inaugurated a subscription campaign to raise money to build a college for young women in Anderson. (Submitted on June 8, 2009, by Brian Scott of Anderson, South Carolina.) 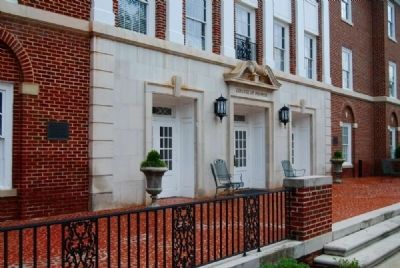 By Brian Scott, May 26, 2009
3. Vandiver Hall and Markers
has been pastor of the First Baptist Church of Anderson and president of Anderson College since 1916, is a Southerner by birth and training, and his work as a religious leader and educator has made him. an honored figure in the Southern states.

Dr. White was born at Clayton, near the City of Raleigh, North Carolina, December 19, 1868, son of James McDaniel and Martha (Ellington) White. His father was also a Baptist minister, and his mother was a daughter of Rev. John Ellington, a Baptist clergyman. Rev. James McDaniel White was also an officer in Hampton's Legion and the Confederate army.

John Ellington White was educated in the schools of North Carolina and in 1890 graduated with honors and the degree of Bachelor of Arts from Wake Forest College in North Carolina. Up to that time he had contemplated the profession of law. While teaching in Mars Hill College in Western North Carolina in 1891 he realized a definite calling to the ministry. He was ordained a Baptist minister in 1892 and served as pastor of the church at Edenton, North Carolina, from 1893 to 1895. In 1915 Wake Forest College gave him the degree Doctor of Divinity. He was unanimously elected, and from 1896 to 1901 served as mission secretary of North Carolina for the State Baptist Convention. Under his leadership the mission work was more than doubled. In 1900 he was called to the pastorate of the By Brian Scott, May 26, 2009
4. Whyte House Marker
Second Baptist Church of Atlanta, Georgia, and was engaged in the duties of that position from January 1, 1901, until 1916. During this period of fifteen years the Second Baptist Church of Atlanta became one of the very largest and most important aggregations of that denomination in the South. He resigned to become pastor of the First Baptist Church at Anderson, this being the largest Baptist Church in South Carolina. In connection with his pastorate Doctor White is president of Anderson Woman's College. Under his direction this college has won a Southwide influence in Christian education.

Doctor White has been distinguished not only for fearless leadership but by a breadth of vision and clearness of thinking which make leadership worthy of the name. An eloquent preacher, he has been concerned primarily with inspiring the cultured audiences in his own churches with his own sense of responsibility for the education and enlightenment of the masses of people. He has long been identified with educational movements that have brought him to the remoter sections of the South, and is one of the recognized leaders of the South in the work of adjustment which seeks to improve and harmonize the relations between the white and black races.

While in Atlanta Doctor White served as head of the Law and Order Committee of the Atlanta Ministry Association, and was the first vice 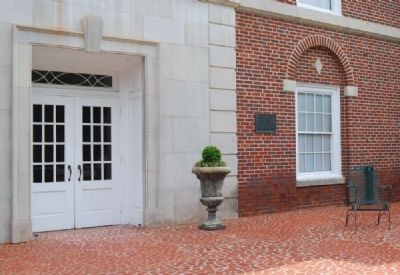 By Brian Scott, May 26, 2009
5. White Building Marker
president of the Southern Sociological Congress. He has served as a trustee of Wake Forest College, of Meredith College of North Carolina, of Mercer University of Georgia, of the Southern Baptist Theological Seminary of Louisville, and in 1914-15-16 was university preacher of the University of Chicago. He was president in 1009 of the Georgia Baptist Board of Education and served on the Boards of Control for the Georgia Baptist Orphans Home, the Home Missionary Board and the Georgia State Sanitarium and the Southern Baptist Convention. He is an independent democrat in politics and a member of the Kappa Alpha college fraternity.

October 12, 1892, Doctor White married Erne I. Guess, of Cary, North Carolina. They are the parents of two sons and one daughter. (Source: History of South Carolina by Yates Snowden, pgs 143-144.)
— Submitted June 8, 2009, by Brian Scott of Anderson, South Carolina. 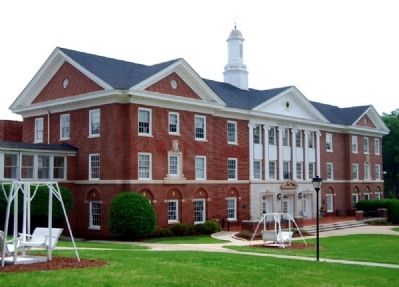 By Brian Scott, May 26, 2009
6. Vandiver Hall
2. Vandiver Hall (Whyte House / John E. White Building)
Known originally as the Whyte House, in honor of Dean James P. Whyte, this three-story brick building over brick basement is constructed with cast stone and wood accents. Its lateral linear masses differentiates it from the other main buildings on the front campus, not only in its orientation but also in that it is organized with a central core featuring a five-bay wide, full height, pilastered and pedimented pavilion, projecting end pavilions, a ground level with cast stone water table separating it from the piano nobile, and finally a classical entablature and roof-level ornamentation such as symmetrical, pedimented cross gables and a central cupola. The first or main entry level is characterized by a three-bay cast stone central entrance, the middle one of which features a scrolled pediment, and eight-over-eight-light, double-hung sash windows within semicircular blind brick arches. These windows contain cast stone imposts, brick voussoirs, and a central cast stone lozenge motif. The central pavilion's second and third stories are dominated by six cast stone Ionic order pilasters. All windows on the upper levels are eight-over-eight-light sash except for the second floor central windows of each and pavilion, where there are six-over-six and surrounded by cast stone moulding, brackets, 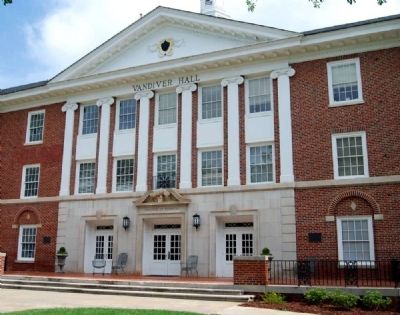 By Brian Scott, May 26, 2009
7. Vandiver Hall
and cartouche. At roof level the building is surrounded by a crenelated frieze and modilioned cornice, a central pediment with an escutcheon, and end pavilion pediments with louvered roundels. The building is capped by a central four-part, hexagonal wooden cupola. When the building was expanded in 1960 to accommodate a student center and gymnasium, a two-story box-like rear addition with metal hopper windows, it became known as the John E. White Building, in honor of the former president of the college from 1916-1927, the period when the older portion of the building was conceived and built. Only in 1995 did it receive the name Vandiver Hall, in honor of a prominent local family. (Source: Anderson College Historic District National Register nomination form.)
— Submitted June 8, 2009, by Brian Scott of Anderson, South Carolina.