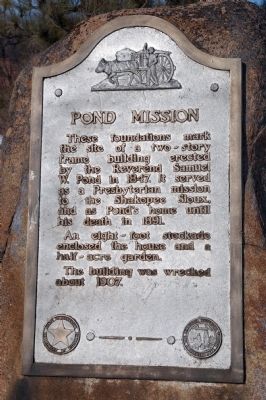 Photographed By Martha Decker, February 4, 2009
1. Pond Mission Marker
Inscription.
Pond Mission. . These foundations mark the site of a two-story frame building erected by the Reverend Samuel W. Pond in 1847. It served as a Presbyterian mission to the Shakopee Sioux, and as Pond's home until his death in 1891., An eight-foot stockade enclosed the house and a half-acre garden., The building was wrecked about 1907. . This historical marker was erected in 1954 by Minn Dept of Highways (MHD). It is in Shakopee in Scott County Minnesota

These foundations mark the site of a two-story frame building erected by the Reverend Samuel W. Pond in 1847. It served as a Presbyterian mission to the Shakopee Sioux, and as Pond's home until his death in 1891.

An eight-foot stockade enclosed the house and a half-acre garden.

The building was wrecked about 1907.

Topics and series. This historical marker is listed in these topic lists: Charity & Public Work • Churches & Religion • Native Americans • Settlements & Settlers. In addition, it is included in the Minnesota Historical Society series list. A significant historical year for this entry is 1847.

Other nearby markers. At least 8 other markers are within 7 miles of this 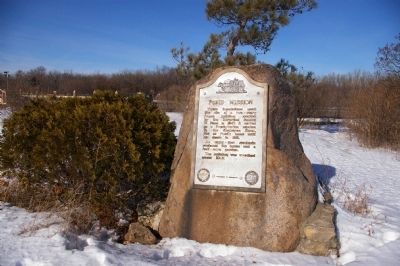 More about this marker. The site is accessed via Cavanaugh Drive, an east-west asphalt paved city street that runs parallel to Highway 101 (there is no longer access directly from 101.)

A sign for the marker in Shakopee will send you to the wrong side of the highway. Follow 101 east out of Shakopee, turn right on Viking Steel Drive, and take another quick right onto Cavanaugh Drive.

The site includes the foundation of the Pond Mission House which was built in 1847 by Rev. Samuel W. Pond and a marker about the mission mounted on a large boulder. The approximately 6' high boulder is mounted on end in a horseshoe-shaped, tan, limestone rubble base that measures about 4' by 5'. There is an aluminum plaque (rectangular with a curvilinear top) mounted on the southern side of the boulder (facing away from Highway 101). The seals of the Minnesota Historical Society and the Minnesota Department of Highways are cast at the bottom of the plaque. The text addresses the Pond Mission.

The site was originally an extensive roadside parking area built by the NYA (National Youth Administration) in 1941 that stretched for over 600' on both sides of Highway 101. Visitors could cross back and forth via a culvert that went under the highway. There were trails, picnic areas, a mill pond, and parking areas. The boulder marker was originally placed north of the mission foundation and faced Highway 101 to the north. It stood just east of an asphalt-paved entrance drive that led from Highway 101 south to a small rectangular parking area west of the foundation that was lined with timber posts. A timber hanging-arm sign of the type commonly used by the Highway Department's Roadside Development Division stood just east of the entrance drive. The sign read "Mill Pond Roadside Parking Area."

All that remains of the site are the mission foundation and the marker. The northern part of the site is gone. The stone-veneered concrete culvert has been replaced by a modern highway bridge. The southern parking area, picnic area, trails, and plantings have been removed. The entrance drive, parking area, and sign constructed circa 1954 were removed at an unknown date. The boulder marker was subsequently moved to the southern side of the Mission foundation and turned to face south.

Regarding Pond Mission. Samuel Pond and his brother Gideon (who "set up shop" across the Minnesota river in Bloomington, Minnesota) were laymen from Connecticut who had been converted in a New England revival and came to Minnesota in 1834 seeking a field for missionary work among the Sioux or Dakota Indians of the Northwest. Among many other accomplishments, the Pond brothers were important for being recorders of both the Dakota language and Sioux life and customs. 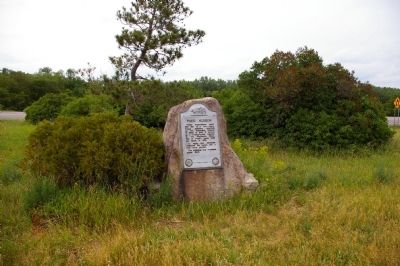 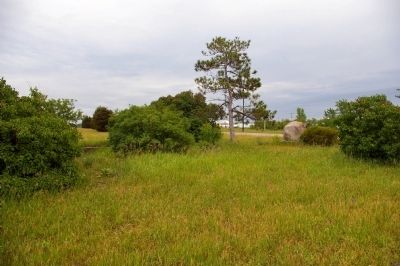 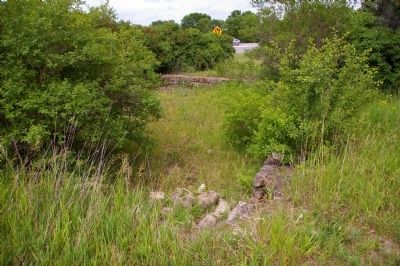 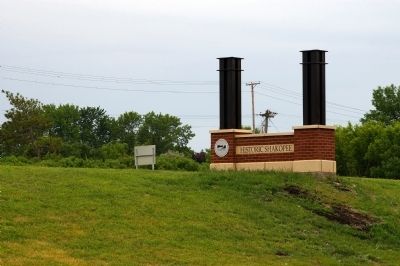 Photographed By Martha Decker, June 9, 2009
6. Pond Mission Site from Across the Highway
Ironic that this brand new "Historic Shakopee" sign is situated right across the highway from the overgrown and neglected Pond Mission marker. It also sits right on the site where they obliterated the entire north side of the old NYA-built roadside parking area. 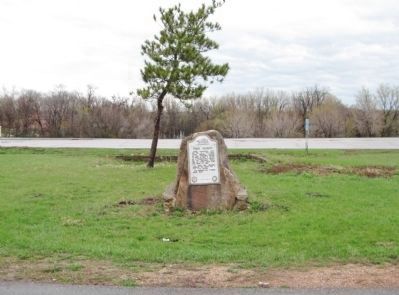 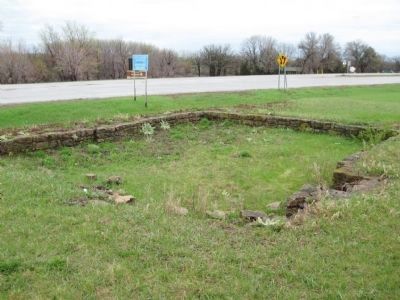 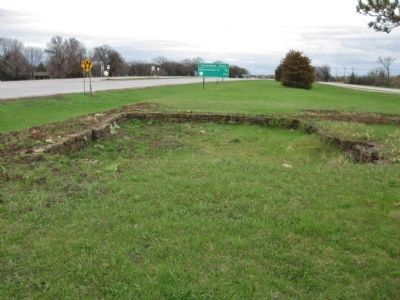