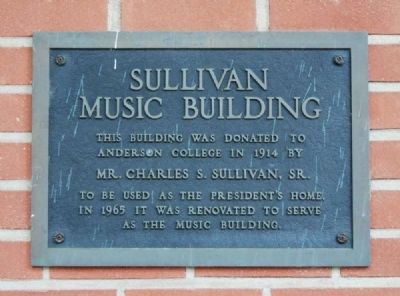 This building was donated to
Anderson College in 1914 by
Mr. Charles S. Sullivan, Sr.
to be used as the President's Home.
In 1965 it was renovated to serve
as the music building.

Topics. This historical marker is listed in these topic lists: Arts, Letters, Music • Education. A significant historical year for this entry is 1914.

Location. 34° 30.767′ N, 82° 38.217′ W. Marker is in Anderson, South Carolina, in Anderson County. Marker can be reached from the intersection of Boulevard (U.S. 29) and Calhoun Drive. Marker is located on the south side of the building, on the campus of Anderson University. Touch for map. Marker is at or near this postal address: 316 Boulevard, Greenville SC 29601, United States of America. Touch for directions. 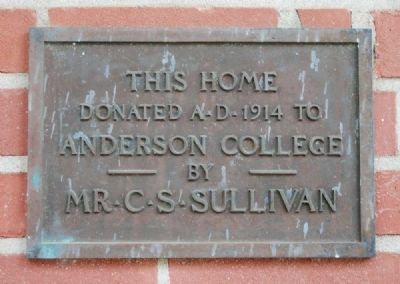 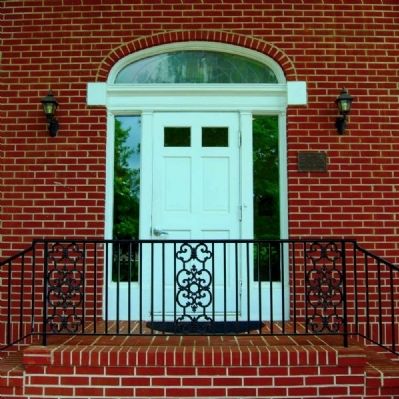 Photographed By Brian Scott, May 26, 2009
3. Sullivan Music Building Entrance and Marker
Anna, the spirit thought to roam the Sullivan Building on the Anderson College campus, goes something like this:

Anna, the 16-year-old daughter of a former Anderson College president, fell in love with a Catholic boy named Francis, whom her father didn?t approve of. So distraught was she that she threatened suicide if her father didn't permit the marriage. Unfortunately, her feigned suicide attempt was successful and she accidentally hanged herself.

In the early '80s, stories of ghostly sightings in the upstairs room of the Sullivan Building began to surface. Most people reported hearing someone playing the piano or singing. Others would hear footsteps on the wooden stairs or someone walking around above them. Some actually said they saw the ghostly figure of a girl pining away for her lost love.

These days, the story of Anna is rife with "supposedly," "maybe," and plenty of doubt.

Physical Plant Director Dennis McKee, who has worked at Anderson College for 28 years, said he thinks it's an old wives' tale.

"You know how yarns get started and the story starts mushrooming and mushrooming," he said. "I've never experienced anything, and neither has anyone who works for me. It's just a building like all the other buildings."

Greg Allgood is the director of campus ministries, which is now located in the Sullivan Building. He said 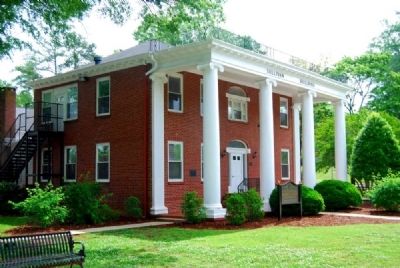 Photographed By Brian Scott, May 26, 2009
4. Sullivan Music Building
he has worked in his office as late as three in the morning and has yet to have a ghostly encounter.

Once you start that kind of ball rolling, people have a tendency to feel that way, he said.

"It still has its old, creepy feelings sometimes. I think it's just a lot of enhanced imagination," Mr. Allgood said. Lawrence Webb, a retired journalism professor at Anderson College, claims the story was invented to enhance a haunted house fund-raiser in the early '80s that was held in the Sullivan Building.

"The ghost story, as far as I'm concerned, was cooked up by the choir, which made a nice little story as you were taken through the haunted house. You paid admission and went through the haunted house and the choir members told you this story," he said. "If there's any more to that, I don't know. Supposedly on dark nights you could hear a piano playing and supposedly it was a girl that was heartbroken."

He said a couple of people once got permission to stay at the Sullivan Building overnight to investigate but came away disappointed.

"They saw nothing other than looking down 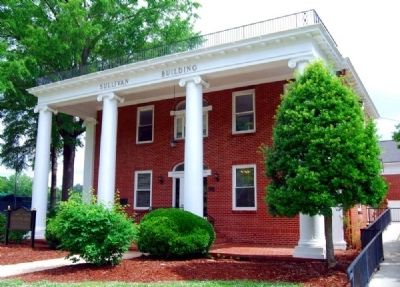 As for whether or not the spirit of Anna actually exists, those who should know doubt it. But it's certainly very easy to sense a spirit when peering down the original stairs into the basement.

"From my perspective, it's an old building. It makes noises," Mr. Allgood said. "I worked at a radio station that was an old funeral home at one time so this is nothing compared to that."
— Submitted June 9, 2009, by Brian Scott of Anderson, South Carolina.
2. Strange Happenings at the Sullivan Building
The story of the haunting at the Sullivan Building at Anderson College is one of the most often told of the Upstate's ghost stories. However, the college denies that any of its buildings are haunted. The haunting has been reported in many different places, including a book by Nancy Roberts and an article in the Anderson Independent-Mail newspaper. Oddly enough, though the college denies that the haunting ever happened or has any basis in fact, an article even appeared in the college newspaper, Echoes.

The Sullivan Building on the campus of Anderson College has a long history. It was built between 1911 and 1924 and added to the National Register of Historic Places with the rest of the campus in 1998. It has served as the school president's house and the music building and is currently the home to the Baptist Campus Ministries and other college offices.

The best-known version of the haunting if found in Nancy Robert's book South Carolina Ghosts: From the Coast to the Mountains, which incorporates the 1982 article from the Anderson Independent-Mail. Roberts describes a male student's encounter in the then Sullivan Music Center with a gently glowing, semi-transparent figure of the young lady seated at a piano. She identifies herself as Anna and as the daughter of the college president. The young man has the presence of mine to quiz the ghost further as to why she remains and how he can help her find peace. The ghost needs his (or someone's) help in encouraging her parents to accept her fiance, despite their feeling that she is too young to marry and their disapproval of his being Catholic. The interview ends with a threat from the young woman to misbehave unless the man helps her in her quest. The fact that everyone involved is more than likely deceased, not to mention the fact that the entire conversation occurs via telepathy, does not seem to throw the young man off in the least. The next day, the student and his roommate encountered two maintenance men fleeing the Sullivan Center in a high state of distress. The men claimed to have heard a woman singing and playing a piano after hours, in a locked and (supposedly) empty room. Inside Sullivan, the two students encountered a third janitor who described hearing footsteps and finding faucets running in a deserted building. According to Roberts, one of the students claimed that his father was the rejected suitor. In the end, the college provided an official denial that anything tragic has ever happened either on campus or in the music building.

Some other accounts, including one told by an Anderson College alumnus on one website, points out that the Sullivan Building was the college president's house up to the 1940s and confirms that his daughter was unlucky in love. This former student also adds the rumor that the daughter planned to fake her own suicide by hanging herself off the staircase in the foyer of the building, but that the attempted trick failed. This version also adds that the ghost has been sighted on the lawn in front of the building as well.

The version found in the November 19, 1987 issue of Echoes, the Anderson College newsletter, gives no background, just that a girl plays the piano softly and that the lights have been known to go on and off, despite the building being empty.

Of course, I had to try to verify the existence of this lovely phantom. I called Brenda Dubose, a reference librarian at the Olin D. Johnston Memorial Library at Anderson College, and asked her of the Sullivan Building as haunted and if the ghost was still active. She told e that there have been some stories over the years, but that she had not seen or heard anything and that, to her knowledge, there were no ghosts on campus. I asked if that was still the college's official opinion and she said yes.

So sadly, I could not verify the existence of the lonely lady waiting for her father's blessing, but I have a hunch that on quiet nights, beautiful melancholy music rises from an old piano tucked away in the Sullivan Building followed by the flicker of lights in an empty office. (Source: Ghosts of the South Carolina Upcountry by Talmadge Johnson (2005), pgs 12-14).
— Submitted June 9, 2009, by Brian Scott of Anderson, South Carolina.
3. About Charles S. Sullivan, Sr.
Charles Stark Sullivan. One of the notable group of business men, and long associated with his brothers in the preeminent business known as the Sullivan Hardware Company of Anderson, Charles Stark Sullivan was not only a successful business man but cheerfully accepted and carried forward many responsibilities connected with church, education and civic affairs.

He was born in Anderson County May 26, 1868, son of Captain Nimrod K. and Emily K. (Mattison) Sullivan. His father was a captain in the Confederate army. In the Sullivan family were four daughters and seven sons. One of the sons died in infancy and O.S. Sullivan at the age of twenty-one. The five sons who reached maturity were J.M., H.K., C.S., N.B. and William W. Sullivan. All at one time or another were factors in the growth and development of the present Sullivan Hardware Company. The business was established thirty-five years ago by J.M. and H.K. Sullivan.

Charles S. Sullivan grew up at Anderson and acquired a good education in the private school of Professor W.J. Ligon. In early manhood he moved to Elberton, Georgia, where for two years he was manager of a branch house of the Sullivan Hardware Company. On returning to Anderson he took an active part in the affairs of the business, and succeeded his brother H.K. Sullivan as president of the company. All his business associates felt complete confidence in his ability and in the probity of his character. He was a friend of church and education, for many years an active member of the First Baptist Church of Anderson, and at the time of his death had been a deacon of the church for five years. Just before his death he was elected president of the adult class in the Sunday school.

He was a trustee of Anderson College. While on business at Columbia in connection with the college he died suddenly of heart failure October 12, 1915. His death was the greater loss because he was at the time a comparatively young man, only forty-seven. He was a Knight Templar Mason and Shriner. In 1890 he married Miss Luta Bewley, a daughter of William Carter and Catherine Douglas (Hale) Bewley. Her parents were born, reared and married in East Tennessee and for a number of years lived at Anderson, where her father was a well known merchant. Mrs. Sullivan and children reside in a fine home on South Main Street in Anderson. Her five children are named Charles Stark, Catherine, Emily, Dorothy and Luta Barbara. (Source: History of South Carolina by Yates Snowden, pg 143.)
— Submitted June 9, 2009, by Brian Scott of Anderson, South Carolina.
Credits. This page was last revised on June 16, 2016. It was originally submitted on June 9, 2009, by Brian Scott of Anderson, South Carolina. This page has been viewed 2,047 times since then and 13 times this year. Photos:   1, 2, 3, 4, 5. submitted on June 9, 2009, by Brian Scott of Anderson, South Carolina.
Share this page.