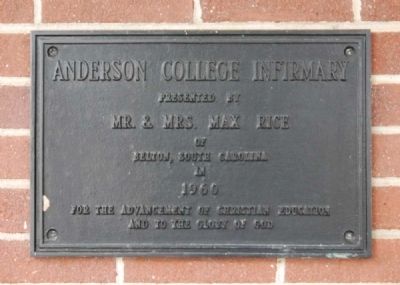 Presented by
Mr. & Mrs. Rex Rice
of
Belton, South Carolina
in
1960
for the Advancement of Christian Education and to the Glory of God.

Topics. This historical marker is listed in this topic list: Science & Medicine. A significant historical year for this entry is 1960.

Location. 34° 30.867′ N, 82° 38.367′ W. Marker is in Anderson, South Carolina, in Anderson County. Marker is on Kingsley Road, on the right when traveling north. Marker is located on the west side of the building, on the campus of Anderson University. Touch for map. Marker is at or near this postal address: 316 Boulevard, Greenville SC 29601, United States of America. Touch for directions. 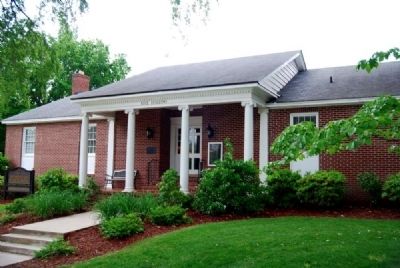 Click or scan to see
this page online
Sullivan Music Building (approx. 0.2 miles away); Abney Athletic Center (approx. ¼ mile away); Virginia "Jennie" Gilmer (approx. half a mile away); McGee Harness Shop (approx. 0.6 miles away). Touch for a list and map of all markers in Anderson.

Regarding Anderson College Infirmary. The Infirmary is also known as the Rice Building.