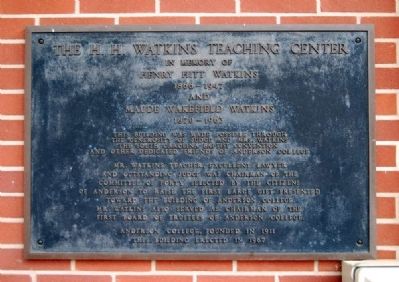 In Memory of
Henry Hitt Watkins
1866-1947
and
Maude Wakefield Watkins
1870-1963
This building was made possible through the generosity of Judge and Mrs. Watkins, the South Carolina Baptist Convention, and other dedicated friends of Anderson College.

Anderson College, Founded in 1911
This Building Erected in 1967

Topics. This historical marker is listed in this topic list: Education. A significant historical year for this entry is 1911.

Location. 34° 30.9′ N, 82° 38.35′ W. Marker is in Anderson, South Carolina, in Anderson County. Marker is on Kingsley Road, on the right when traveling north. Marker is located on the west side of the building, on the campus of Anderson University. Touch for map. Marker is at or near this postal address: 316 Boulevard, Greenville SC 29601, United States of America. Touch for directions.

Other nearby markers. At least 10 other markers 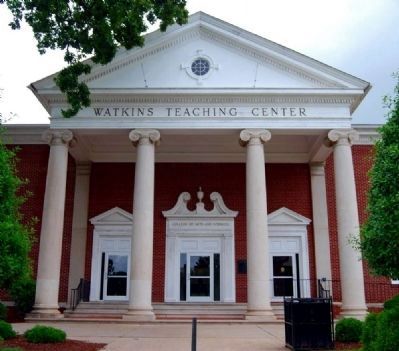 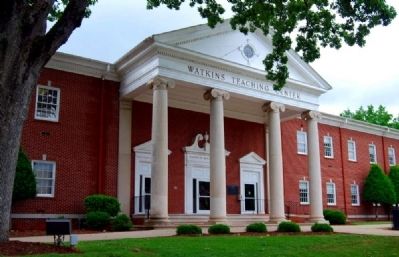 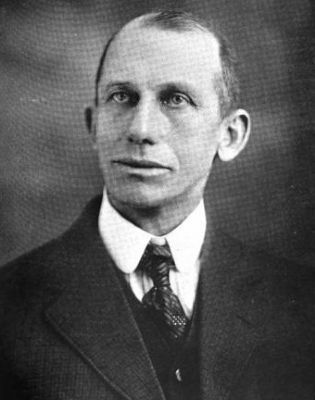 Photographed By Brian Scott
4. Henry Hitt Watkins
1866–1947
2. Henry Hitt Watkins
Henry Hitt Watkins, lawyer, was born in Waterloo township, Laurens county, South Carolina, June 24, 1866. His parents were Henry H. and Hannah Elizabeth (Culbertson) Watkins. His father was a farmer who was noted for his liberality, hospitality, his enjoyment of argumentative discussions, and his pride in and self-sacrifice for his children. He was a man of powerful physique and great strength of character. He never held or sought a public office, but served as captain of a militia company before the war and was a lieutenant in the Confederate States army during the conflict between the states. The earliest known paternal ancestor of the family in this country came from Wales and settled in Virginia sometime prior to the Revolution. His descendants, with a company of Scotch-Irish settlers from that region, removed to Laurens county, South Carolina. On the maternal side, the first ancestor in America was Robert Culbertson, who came from Ireland and settled in Pennsylvania several years before the Revolution. His son, James Culbertson, removed to Caswell county, North Carolina, and thence to Laurens county, South Carolina, where he remained until his death. Neither these immigrants nor the majority of their descendants were specially prominent in public affairs, but they were well represented in the Revolution and in the War between the States.

In childhood and youth Henry Watkins lived in the country. His health was fairly good. While he was fond of athletic sports and of youthful companionship, he was also deeply interested in reading and study. He did his share of the farm "chores," but was neither required nor allowed to perform any work that would interfere with his studies. From 1873 to 1879 he attended the "old field" school at Centerville, Laurens county, South Carolina. In October of the year last named he entered Furman university, from which institution he was graduated with the degree of A.M. in June, 1883. He was then only seventeen years of age. His love of books led him to take the four-years' course of study marked out by the Chautauqua Literary and Scientific circle, which he completed in due time and from which he derived considerable benefit. In 1890 he took the summer law course in the University of Virginia, under Dr. John B. Minor. Long before he completed his public educational course Mr. Watkins entered upon the active work of life. At the early age of fifteen he took the county school teachers' examination and received a first grade certificate. For two summers prior to his graduation he was assistant teacher in a country school and afterward taught for several sessions as principal of such schools. In 1887 he was elected principal of the preparatory school of Furman university, which position he held for four sessions. He was admitted to the bar in May, 1892, and in June of the same year he began active practice at Anderson, South Carolina, where he had formed a law partnership with Major E.B. Murray. This partnership continued until the death of Major Murray, in July, 1894. In the following month Mr. Watkins formed a partnership with Gen. M.L. Bonham, under the firm name of Bonham & Watkins, which has continued until the present time and which is one of the leading law firms in the state. Mr. Watkins has always maintained his interest in education and has served as trustee of several institutions of learning, including Furman university, 1894-98; Greenville Female college, 1893-98; Anderson graded schools, 1895-98; and he was a trustee of the Connie Maxwell orphanage, 1897-98. When in 1898 there was a call for troops to serve in the Spanish-American war, Mr. Watkins promptly enlisted in a company raised at Anderson, and was elected its captain. This company formed a part of the First Regiment, South Carolina Volunteer Infantry. Its services were not required and it was mustered out in the November following its organization. In politics Mr. Watkins has always been a Democrat. He was chairman of the Anderson county executive committee of his party from 1902 to 1906, and is now (1907) a member of the state executive committee. He was presidential elector in 1904, and from 1903 to 1907 was quartermaster-general on the staff of Governor Heyward. He is one of the directors and vice-presidents of the chamber of commerce of Anderson, and is a member of the board of directors of several business and financial institutions.