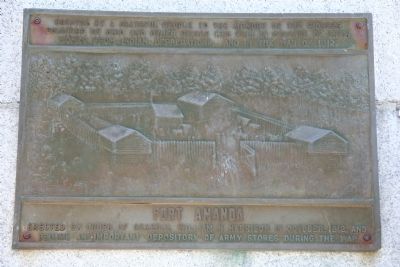 Photographed By Dale K. Benington, June 5, 2009
1. Fort Amanda Marker
Inscription.
Fort Amanda. . Erected by order of General William H. Harrison in October 1812 and became an important depository of army stores during the war. . This historical marker was erected by A grateful people to the people to the memory of the pioneer soldiers of Ohio and other states who fell in defense of their homes from Indian depredations, and in the War of 18 12.. It is in Spencerville in Allen County Ohio

Erected by order of General William H. Harrison in October 1812 and became an important depository of army stores during the war.

Erected by A grateful people to the people to the memory of the pioneer soldiers of Ohio and other states who fell in defense of their homes from Indian depredations, and in the War of 1812.

Topics. This historical marker is listed in these topic lists: Forts and Castles • Native Americans • War of 1812. A significant historical month for this entry is October 1812.

Location. 40° 40.83′ N, 84° 16.072′ W. Marker is in Spencerville, Ohio, in Allen County. Marker can be reached from Ohio Route 198, 0.2 miles south of Deep Cut Road. This historical marker is located deep inside the Fort Amanda State Memorial park, affixed to the Fort Amanda Memorial Monument. To view this historical marker one must walk about 0.2 mile from the parking lot to the memorial. Touch for map. Marker is in this post office area: Spencerville OH 45887, United States of America. Touch for directions.

Other nearby markers. At least 8 other markers are within walking distance of this marker. Fort Amanda Monument (here, next to this marker); Sketch of a Soldier (a few 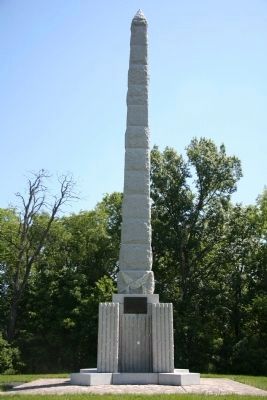 "Fort Amanda, the only military post in Ohio to be named for an eleven-year-old girl, was built by a Kentucky militia regiment under Colonel Robert Poague. In October of 1812, these troops were ordered by General Harrison to build a road between Forts Jennings and Winchester and then return south via some villages of the Ottawa tribe that were in the area. After completing this mission, they were to build a stockade on the Auglaize River, approximately twelve miles from Fort Barbee. The spot they built on is today located on State Route 198, about nine miles north of Wapakoneta in Auglaize County." 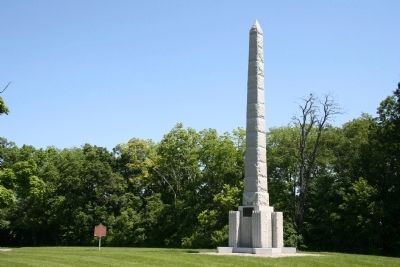 Photographed By Dale K. Benington, June 5, 2009
3. Fort Amanda Marker
Distant view of Fort Amanda Memorial Monument, with the treeline in the background marking the ridge overlooking the Auglaize River.
on the new fort went quickly and uneventfully except for the scalping of Captain Enoch Dawson, who was killed while picking grapes. The completed post was 160 feet square with four blockhouses with protruding second stories. The main gate was on the northwest wall facing the river, while another fifteen-foot-wide gate was on the southeast curtain. The stockade walls were eleven feet high with the pickets set four feet in the ground. Colonel Poague departed from Kentucky colonel tradition and declined to make his fort eponymous, and instead named the fort after his eleven-year-old daughter. Fort Amanda was then left in the hands of 64 Kentucky militia under the leadership of Captain Thomas Ward."

"In February 1813, these troops were replaced by Ohio militia under Captain Daniel Hasbrook. A member of the replacement garrison wrote of the joy of the Kentuckians at being able to return home: 'All in high glee and black and dirty as Indians (they) sang and danced in the most infamous manner and the most blasphemous swearing possible... to utter was made by those self-conceited infidels.'"

"The Ohioans set about expanding the fort, doubling the size to 160 by 320 feet. They also added storage buildings, cabins, and a fifth blockhouse, as well as a corral space so large that 1,200 horses wintered there. Another addition was a hospital, which was needed in light of the diseases that were rampant among the troops. Even though there was never any combat on the site, there were 75 men who died at the fort from various causes. Contagious disease was such a problem that the fort's Fourth of July celebration in 1813 was canceled due to measles."

"The most notable activity at Fort Amanda was boat-building. The Auglaize was a deeper river then, and boats built here could be floated to the Maumee much quicker than from Fort Barbee. The frontier boat of choice was the pirogue, a canoe made from a hollow tree trunk. Over 70 such boats were constructed here, including the ones used by the troops who reinforced Fort Meigs during the siege of May, 1813. Most boats built here, however, were used to transport supplies to the forts on up the line."

"Although Harrison visited Fort Amanda in the summer of 1813, it was not militarily significant and was abandoned in 1814. The site stood unnoted for one hundred years until a commemorative shaft was erected in 1915."

"Today Fort Amanda is a state memorial maintained by the Johnny Appleseed Metro Park District. In addition to the monument, there is a trail that goes along the river past the graves of those who died of illness here."