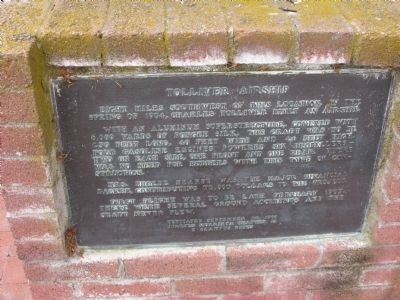 Inscription.
Tolliver Airship. . Eight miles southwest of this location, in the Spring of 1904, Charles Tolliver built an airship., With an aluminum superstructure covered with 6,000 yards of rongee silk, the craft was to be 250 feet long, 40 feet wide and 44 feet high. Four gasoline powered engines and six propellers - two on each side, one in the front, one rear. There was no need for rudders with this type of construction., Mrs. Phoebe Hearst was the main financial backer, contributing 72,000 dollars to the project., First flight was to be late February 1907. There were several ground accidents and the craft never flew.,
Dedicated September 26, 1981 , Joaquin Murrieta Chapter No.13 , E Clampus Vitus. . This historical marker was erected in 1981 by Joaquin Murrieta Chapter 13, E Clampus Vitus. It is in Livermore in Alameda County California

Eight miles southwest of this location, in the Spring of 1904, Charles Tolliver built an airship.

With an aluminum superstructure covered with 6,000 yards of rongee silk, the craft was to be 250 feet long, 40 feet wide and 44 feet high. Four gasoline powered engines and six propellers - two on each side, one in the front, one rear. There was no need for rudders with this type of construction.

Mrs. Phoebe Hearst was the main financial backer, contributing 72,000 dollars to the project.

First flight was to be late February 1907. There were several ground accidents and the craft never flew.

Topics and series. This historical marker is listed in these topic lists: Air & Space • Notable Events. In addition, it is included in the E Clampus Vitus series list. A significant historical month for this entry is February 1907. 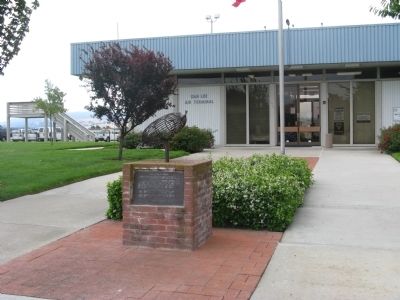 Photographed By Syd Whittle, June 13, 2009
2. Tolliver Airship Marker
The Air Terminal Building is in the Background

Click or scan to see
this page online
left when traveling west. Marker is located at the entrance to the Dan Lee Air Terminal at the Livermore Airport. Touch for map. Marker is at or near this postal address: 415 Terminal Circle, Livermore CA 94551, United States of America. Touch for directions.

Also see . . .  New dirigible has many novel features. This article, published in Popular Mechanics in August 1911, lauds the many new ideas Tolliver had planned for his dirigible. (Submitted on June 17, 2009.)

“Charles Tolliver turned up in the Livermore Valley in 1903 with great plans to build an airship. He founded a construction site on the east side of what is now I-680 below Castlewood. He managed to convince Phoebe Hearst of the feasibility of his design to the tune of $20,000.

The construction site was on the ranch land of E. F. 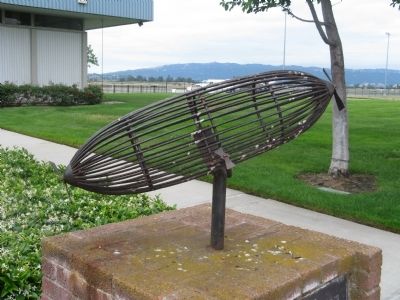 Photographed By Syd Whittle, June 13, 2009
3. Tolliver Airship Sculpture
Frick, who gave Tolliver permission to use it in exchange for having an artesian well drilled on the property. If Mrs. Hearst had invested money in Tolliver's project, Frick concluded he could get in on the ground floor, and he put up $10,000 more.

Tolliver had a ravine on Frick's property enlarged to a length of 270 feet to create a basin and lined it with boards to create a "birthplace" for his airship. Tolliver was somewhat quiet about what he was up to, and it was not until 1904 that the Livermore Herald carried its first news item about Tolliver's venture. The details described an airship 250 feet long, 44 feet high and 40 feet wide, to be propelled by special engines of Tolliver's design. Lift was to be provided by hydrogen gas. It was reported that the first flight would take place in the fall of that year. In 1905, nothing happened. In 1906, nothing happened. The explanation was "unforeseen technical difficulties."

In February 1907 the Herald headlined, "Tolliver's Aerial Craft Ready for First Flight." Everything was ready. But on the morning of the planned ascension, the airship envelope was found to have been mysteriously slashed in several places.

The project suffered a few other accidents—a hydrogen generator exploded, and a wooden wall collapsed during a storm causing serious damage to the hull of the airship. Mrs. Hearst became disillusioned. E. F. Frick sued Tolliver for $50,000 for failure to have a well drilled in exchange for use 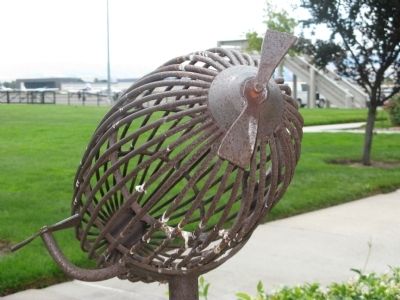 Tolliver and his operation left the valley in 1910 for greener pastures in San Diego. There he found another ravine and started construction of a new airship. This time, Tolliver was more open about his plans. The new site was to be equipped with the most modern hydrogen gas generators each holding 1850 cubic feet of gas. Tolliver's agent, Bert Lewis, was buying enormous quantities of iron filings and sulfuric acid to generate the 250,000 cubic feet of gas to fill the envelope of the airship.

In November 1911, the San Diego Union reported that Tolliver's airship was being filled with gas. November 9, 1911 was announced as the flight date. The shed walls were removed and, for the first time, the public got to see Tolliver's airship in all its glory. Tolliver announced he was having trouble generating gas, not because of generating equipment failure, but because San Diego water was too pure.

At 10:00 a.m., Tolliver inspected the whole outer skin of the airship. He gave his ground crew instructions on handling the mooring lines. The order was given to rev up the engines. Tolliver called to the ground crew, "Let’s go!" Nothing happened. Tolliver said that the day was too cold and the sunshine hadn't warmed up the gas enough.

It occurred to the City Gas Inspector that where there was an airship, there was gas. "Sounds like a public safety problem." So he evacuated two 1.5 cubic foot glass containers and proceeded to take a sample of gas

Courtesy of Technical World Magazine, 1912
5. The menacing airship in the construction pit at San Diego, California
This photo, originally published in the March, 1912 edition of Technical World Magazine, shows the starboard bow of Tolliver's last airship venture. The propellor and acid tanks are in the right foreground. Note the close proximity of the houses in the background. The accompanying article, entitled "Airship Menaces Homes," read:
"Because of his failure to remove a 250-foot airship from a residential neighborhood in San Diego, Cal., the inventor, C. H. Tolliver, is awaiting trial on the charge of failing to abate a nuisance. Health Officer Meade declared that the vast amount of hydrogen gas in the dirigible was sufficient to blow up all the buildings in the vicinity if ignited. Meanwhile the airship refuses to fly, the danger of deflating it is too great to be feasible and the cost of engaging other balloons to remove it is so great that the inventor declares that he is unable to pay."
from the airship. Returning to his lab with the samples, he attached a rubber hose with a pipette to the end of one of the containers, lit a match, and promptly blew up his laboratory.

Now Tolliver's airship was declared a public menace. The City Fathers ordered him to empty his airship immediately and remove it from the city limits. Now, how was one to remove a "beached whale"? The problem was solved when a big windstorm came up and scattered the "whale" across the landscape, blocking traffic. The remains of Tolliver's airship project were loaded on trucks and hauled to the city dump.

All this time Tolliver had kept Bert buying iron filings and sulfuric acid. Bert's wife, Ellen, was a young Swedish girl. And after Bert's latest buying trip, Ellen confessed that Tolliver had "had his way" with her. One night in May 1912, Bert waylaid Tolliver and his wife as they were returning from the theater and shot them both dead.

Bert was arrested, and after a year-long trial, was acquitted on grounds of temporary insanity, but meantime Ellen had divorced him. After he left town, Bert joined a circus.