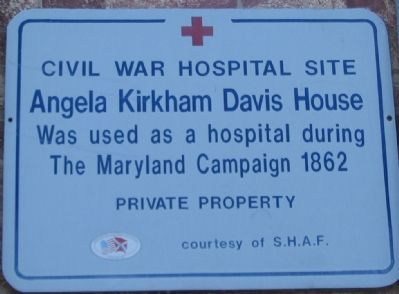 Erected by Save Historic Antietam Foundation. 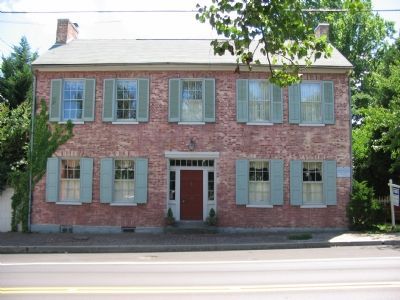 Click or scan to see
this page online
(approx. ¼ mile away); Battle of Funkstown (approx. 0.3 miles away). Touch for a list and map of all markers in Funkstown.

The Battle of Antietam, fought in September 1862, claimed more than 23,000 soldiers killed, wounded, or missing in action, and became the single bloodiest day of the Civil War. The civilian populace, including many women, helped countless wounded and dying soldiers, and cared for the dead. One of those women was Angela Kirkham Davis. Although a Union supporter, Mrs. Davis provided water for Confederate as well as Union troops. When asked why she provided water to the Rebels, she replied, “Because our Heavenly Father taught us to give a cup of cold water, even to our enemies.” After the Battle of Antietam, Angela Davis and her husband Joseph took food to the battlefield. She comforted the wounded and dying and took a wounded officer into her home for nursing. She later wrote her account of these times in a work entitled, “War Reminiscences: A Letter to My Nieces.” Mrs. Davis serves as a symbol of all the women of
Washington County who gave comfort to the soldiers during the Civil War.
— Submitted August 6, 2007, by Craig Swain of Leesburg, Virginia.
Credits. This page was last revised on June 16, 2016. It was originally submitted on August 6, 2007, by Craig Swain of Leesburg, Virginia. This page has been viewed 2,715 times since then and 48 times this year. Photos:   1, 2. submitted on August 6, 2007, by Craig Swain of Leesburg, Virginia. • J. J. Prats was the editor who published this page.
Share this page.