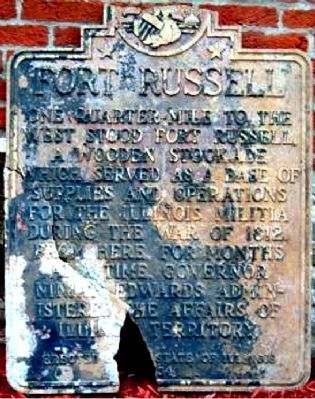 Photographed By Alton Museum of History & Art, Inc
1. Fort Russell Marker
Inscription.
Fort Russell. . , One quarter-mile to the west stood Fort Russell, a wooden stockade which served as a base of supplies and operations for the Illinois Militia during the War of 18 12. From here, for months at a time, Governor Ninian Edwards administered the affairs of Illinois Territory. . This historical marker was erected in 1934 by State of Illinois. It is Near Edwardsville in Madison County Illinois

One quarter-mile to the west stood Fort Russell, a wooden stockade which served as a base of supplies and operations for the Illinois Militia during the War of 1812. From here, for months at a time, Governor Ninian Edwards administered the affairs of Illinois Territory.

Topics and series. This historical marker is listed in these topic lists: Forts and Castles • Government & Politics • Patriots & Patriotism • War of 1812. In addition, it is included in the Illinois State Historical Society series list. A significant historical year for this entry is 1812.

Location. Marker has been reported missing. It was located near 38° 49.392′ N, 89° 57.944′ W. Marker was near Edwardsville, Illinois, in Madison County. Marker could be reached from Springfield Road north of Illinois Route 159. GPS coordinates are approximate. Touch for map. Marker was at or near this postal address: 5000 Springfield Rd, Edwardsville IL 62025, United States of America. Touch for directions.

Other nearby markers. At least 8 other markers are within walking distance of this location. Lincoln School (approx. 0.3 miles away); Governor Coles and Slavery 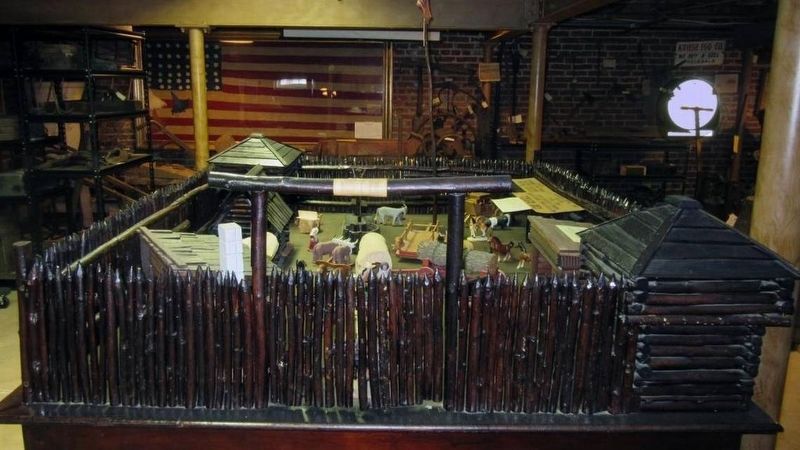 via Belleville News-Democrat, 2016
2. Fort Russell
"This model of Fort Russell was made in 1925 by boys of the Manual Training Department at Wood River Elementary schools. John Stahlheber was the instructor. It’s now in the basement of Madison County Historical Museum. ROGER SCHLUETER RSCHLUETER@BND.COM"

Regarding Fort Russell.
Fort Russell - Many blockhouses were erected in Illinois during the War of 1812, most of them defenses against attack by the Indians who were allied with the British. There were at least 22 such blockhouse-forts between old Kaskaskia and Alton in Madison County, with the largest and strongest of them being Fort Russell, just northwest of present Edwardsville. The fort was built by Governor Ninian Edwards and named for Colonel William Russell of Kentucky, who commanded ten companies of Rangers, organized by an act of Congress, to defend the western frontier against the British and Indians. Four of these companies were allotted to the defense of Illinois. At least five cannon were removed from Fort Chartres to arm Fort Russell. The only Army regulars stationed at the fort were there during spring of 1812 and constituted the garrison for only a few months. pp. 255-271, “Encyclopedia of Historic Forts” by Robert B. Roberts