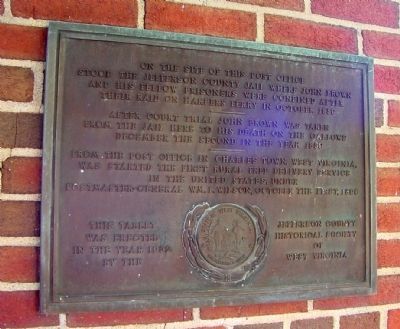 On the site of this Post Office stood the Jefferson County Jail where John Brown and his fellow prisoners were confined after their raid on Harpers Ferry in October 1859.

After court trial John Brown was taken from the Jail here to his death on the gallows December the Second in the year 1859.

From the Post Office in Charles Town, West Virginia, was started the first Rural Free Delivery service in the United States, under Postmaster-General Wm. L. Wilson, October the First, 1896.

Erected 1932 by the Jefferson County Historical Society of West Virginia.

Topics and series. This historical marker is listed in these topic lists: Communications • Landmarks • War, US Civil. In addition, it is included in the Postal Mail and Philately series list. A significant historical month for this entry is October 1859. 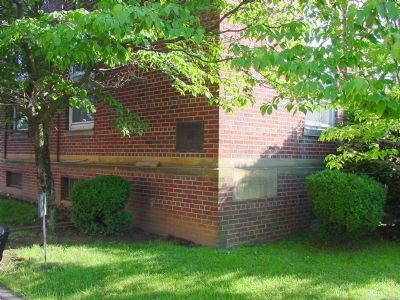 Photographed By J. J. Prats, June 16, 2007
2. Tablet is on the Left Corner of the Post Office
Cornerstone reads “A W Mellon, Secretary of the Treasury. James A Wetmore, Acting Supervising Architect. 1922.”

Click or scan to see
this page online
, on the right when traveling south on South George Street. Touch for map. Marker is in this post office area: Charles Town WV 25414, United States of America. Touch for directions.

Related markers. Click here for a list of markers that are related to this marker. Rural Free Delivery Markers. 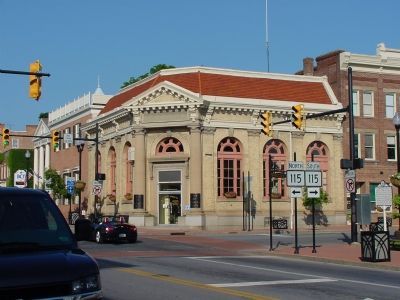 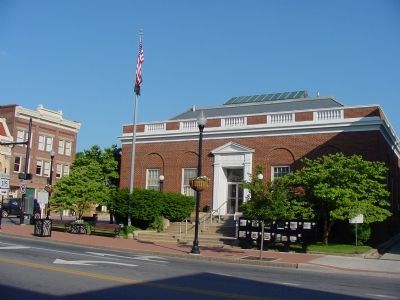