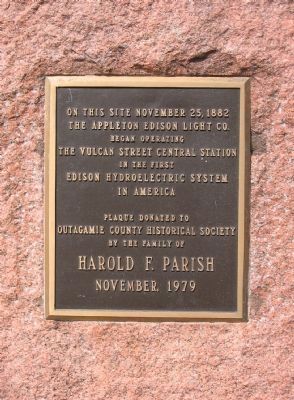 Erected 1979 by the family of Harold F. Parish.

Topics and series. This historical marker is listed in this topic list: Industry & Commerce. In addition, it is included in the Daughters of the American Revolution series list.

Location. 44° 15.47′ N, 88° 23.836′ W. Marker is in Appleton, Wisconsin, in Outagamie County. Marker can be reached from South Lawe Street, on the right when traveling south. The plaque is located on South Vulcan Street, north of East South Island Street. Touch for map. Marker is at or near this postal address: 530 South Vulcan Street, Appleton WI 54915, United States of America. Touch for directions.

Other nearby markers. At least 8 other markers are within one mile of this marker, measured as the crow flies. Vulcan Street Plant Replica (here, next to this marker); 9-11 Memorial (about 500 feet away, measured in a direct line); The Merging of Milwaukee-Downer and Lawrence Colleges 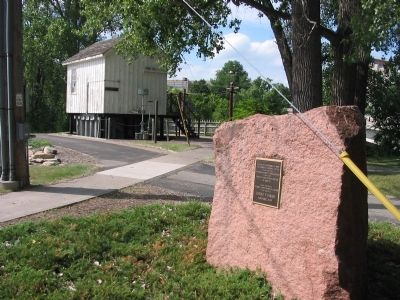 More about this marker. This plaque says November 25th but all other literature, and the missing Wisconsin Historical Society official historical marker, say that September 30th was the day the hydro-electric plant first began running.

Regarding First Edison Hydroelectric System in America. After a fire destroyed the central station, a replica was constructed at the current Lawe Street location preserving all of the building's original features. This building is currently located near its original location at the south end of the Lawe Street Bridge.
There are plans to relocate the replica to a new home in Vulcan Heritage Park, which is situated right across from the original Vulcan Plant. 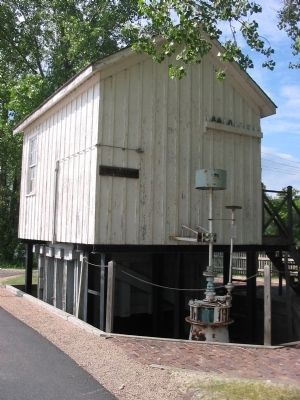 By Keith L, July 4, 2009
3. Replica of the Vulcan Street Hydro-Electric Plant
three buildings (two paper mills and the H.J. Rogers home), at rate of about 12½ kilowatts. It is the first Edison hydroelectric central station to serve a system of private and commercial customers in North America. The story of its development provides keen insight into the nation’s first experiences with the electric light.” (Submitted on July 16, 2009.) 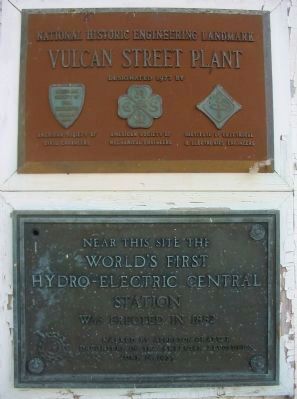 Bottom plaque: Near this site the World’s First Hydro-Electric Central Station was erected in 1882. Marked by Appleton Chapter, Daughters of the American Revolution June 14, 1955. 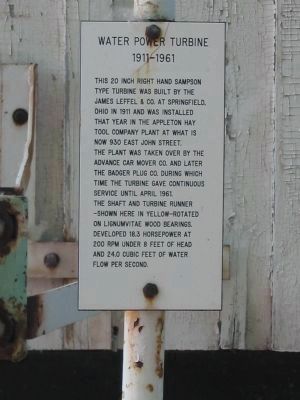 By Keith L, July 4, 2009
5. Water Power Turbine, 1911–1961
This 20-inch right-hand Sampson type turbine was built by the James Leffel & Com. at Springfield, Ohio, in 1911 and was installed that year in the Appleton Hay Tool Company plant at what is now 930 East John Street. The plant was taken over by the Advance Car Mover Co. and later the Badger Plug Co. during which time the turbine gave continuous service until April 1961. The shaft and turbine running—shown here in yellow—rotated on lignumvitae wood bearings. Developed 18.3 horsepower at 200 RPM under 8 feet of head and 24.0 cubic feet of water flow per second.
Credits. This page was last revised on November 16, 2019. It was originally submitted on July 16, 2009, by Keith L of Wisconsin Rapids, Wisconsin. This page has been viewed 1,050 times since then and 41 times this year. It was the Marker of the Week November 17, 2019. Photos:   1, 2, 3, 4, 5. submitted on July 16, 2009, by Keith L of Wisconsin Rapids, Wisconsin. • Craig Swain was the editor who published this page.
Share This Page.