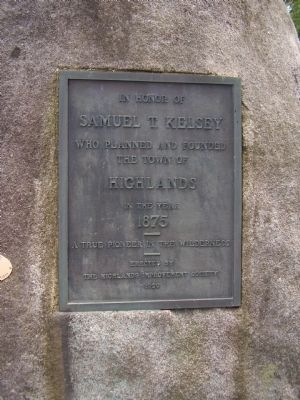 In Honor of
Samuel T. Kelsey
who planned and founded
the Town of
Highlands
in the year
1875
A True Pioneer in the Wilderness

Erected 1929 by The Highlands Improvement Society.

Topics. This historical marker is listed in these topic lists: Exploration • Settlements & Settlers. A significant historical year for this entry is 1875. 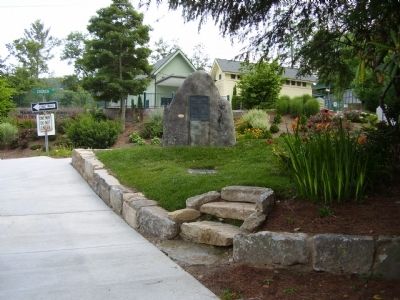 Additional commentary.
1. Samuel T. Kelsey
In 1875 Samuel Kelsey, one of the founding fathers of Highlands, purchased land on a mountain plateau in western North Carolina and began to develop a mountain retreat for all those who would come to enjoy....A part of his original vision has now been developed into Old Highlands Park, a 15 unit condominium project a block off Main Street in downtown Highlands. Mr. Kelsey purchased the property from William Dobson, one of the original pioneers in western North Carolina. Dobson’s father had originally acquired the land through a federal land grant for 10 cents an acre in 1844 and William, his son, sold to Kelsey 31 years later for $2.00 an acre.
— Submitted July 20, 2009, by Stanley and Terrie Howard of Greer, South Carolina. 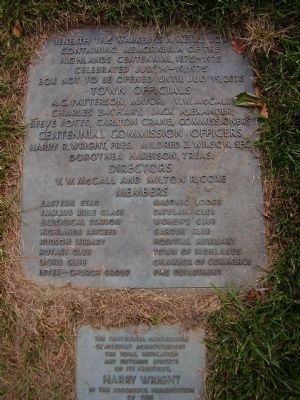