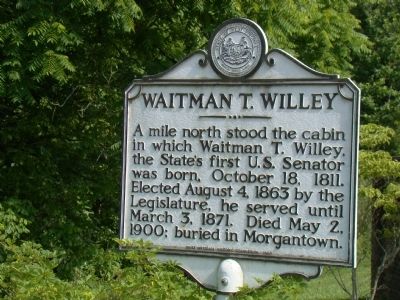 Topics and series. This historical marker is listed in this topic list: Government & Politics. In addition, it is included in the West Virginia Archives and History series list. A significant historical date for this entry is March 3, 1871.

Other nearby markers. At least 8 other markers are within 6 miles of this marker, measured as the crow flies. Farmington Disaster (about 300 feet away, measured in a direct line); Indian Raid (approx. ¼ mile away); Coon’s Fort 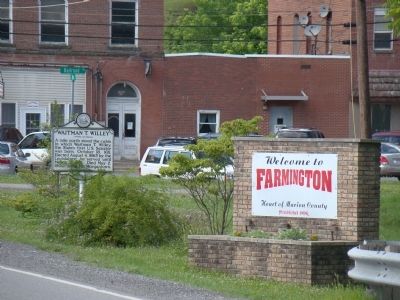 Also see . . .  Funeral of Waitman T. Willey. 1900 article from the Morgantown Daily New Dominion. “Sixty-seven years ago he began the practice of law at the bar in this county and in after years his legal attainments brought to him a lucrative practice. Early in his legal life he began to excel in literature. He delivered many temperance lectures winning oratorical fame and coming into prominence by his orations before associations of learned men. He began to gather a large library and grew prominent in the early history of our state, and was elected a delegate to the state convention assembled to take action in regard to the secession of Virginia. ” (Submitted on July 26, 2009.)
Credits. This page was last revised on December 28, 2019. It was originally submitted on July 26, 2009, by J. J. Prats of Powell, Ohio. This page has been viewed 793 times since then and 4 times this year. Photos:   1, 2. submitted on July 26, 2009, by J. J. Prats of Powell, Ohio.
Share This Page.