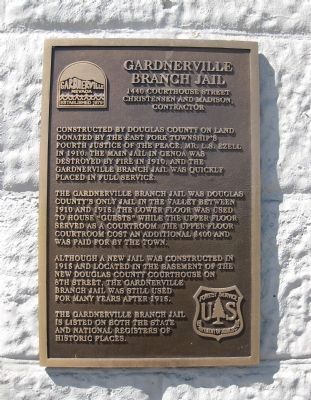 Constructed by Douglas County on land donated by the East Fork Township's Fourth Justice of the Peace, Mr. L.S. Ezell in 1910. The main jail in Genoa was destroyed by fire in 1910, and the Gardnerville Branch Jail was quickly placed in full service.

The Gardnerville Branch Jail was Douglas County's only jail in the Valley between 1910 and 1915. The lower floor was used to house "guests" while the upper floor served as a courtroom. The upper floor courtroom cost an additional $400 and was paid for by the town.

Although a new jail was constructed in 1915 and located in the basement of the new Douglas County courthouse on 8th Street, the Gardnerville Branch Jail was still used for many years after 1915.

The Gardnerville Branch Jail is listed on both the State and National Register of Historic Places.

In the upper left corner of the marker is seal of the city of Gardnerville, while in the lower right hand corner is the seal of the US Forest Service

Topics. This historical marker is listed in this topic list: Law Enforcement. A significant historical year for this entry is 1910. 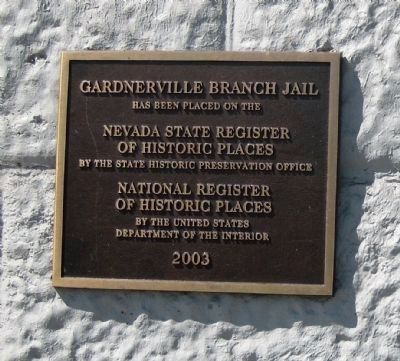 Click or scan to see
this page online
56.507′ N, 119° 44.903′ W. Marker is in Gardnerville, Nevada, in Douglas County. Marker is on Courthouse Street near Gilman Street, on the left when traveling north. Touch for map. Marker is in this post office area: Gardnerville NV 89410, United States of America. Touch for directions.

More about this marker. The marker is mounted to the right of the jail entrance on the ground floor. 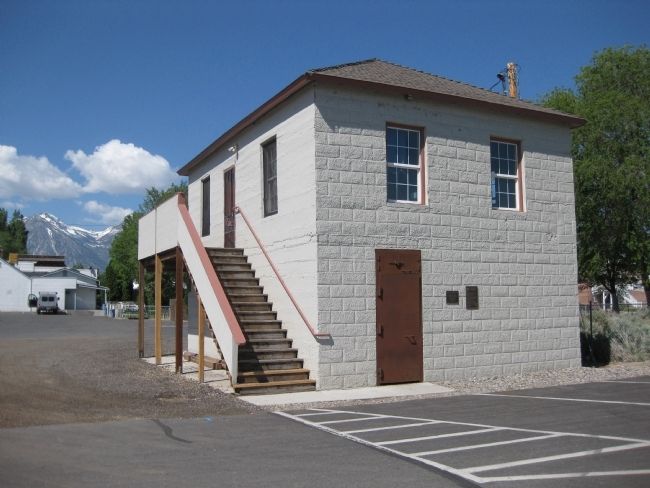